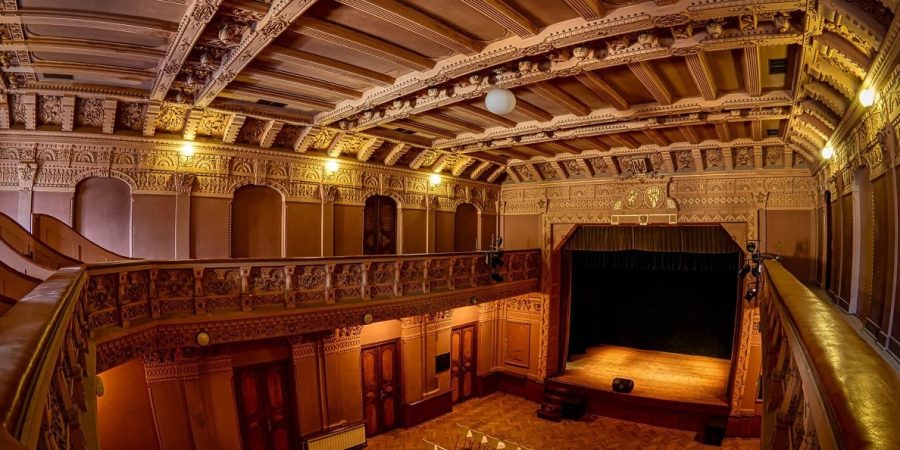 The history about the uniqueness of the architecture and secrets held by the Narodnyi Dim (National or People’s Home) in Peremyshl (Przemyśl).

In 2021, this building will be 117 years old. Exploring its past is like collecting puzzle pieces that were scattered all over the house by a misbehaved child. They are in the most unexpected places and moments; it takes a lot of perseverance to identify them, organize them, and try to assemble them. Of course, without much hope of reproducing the whole picture. Yet despite the fact that this building’s fate still has many missing pieces and a lack of key information, we will try to reveal a large fragment of the picture based on the history of the Ukrainian Narodnyi Dim in Peremyshl.

After the end of World War II, the building ceased to be the property of the Ukrainian community, which built it in 1901-1904 and managed it until 1945. Like many other buildings, private and public institutions, the Narodnyi Dim was nationalized — it was transferred to the newly formed Polish state. This may have been when the entire archive of documents was lost, among which could have been information about the building’s architects and builders. Despite the fact that 10 years later, the Ukrainian Social and Cultural Society started operating in a part of the Narodnyi Dim, the resurrected Ukrainian community to this day has been unable to access historical material. That is why most of the information concerning the past of this building comes from the memoirs of elderly Peremyshl residents, as well as from the conclusions of art historians, historians, and researchers of the heritage of Ukrainian Galicia.

What Are the Walls Whispering?

At first glance, the building, located on Kosciuszko Street near the San (Ukr: Sian) River, stands out from other buildings of this type, which were erected by Ukrainian activists in Galicia at the turn of the nineteenth and twentieth centuries. To some extent, this is influenced by the favorable location on the corner facing the Market Square. However, the main reason that this building is special among similar ones that can be found in places like Kolomyia or Stryi is the very expressive folk elements in the architecture. Given that most of these institutions were built at the same time, this may indicate that there was a strong need to emphasize a separate, Ukrainian heritage. And this is not at all surprising, considering the historical context of the Polish-Ukrainian ethnic border.

Much can be said about the architectural features of the Peremyshl building. The structure has balanced proportions, it is characterized by its original form, the sophistication of its details, and its unusual elegance. However, this is an aesthetic assessment that does not explain even half of its uniqueness. The uniqueness of the Narodnyi Dim is determined primarily by the blue-yellow “embroidered” patterns on the façade, made of glazed brick and ceramic tiles, a powerful coat of arms, and a graceful green dome with decorative round windows at the top. It should be noted that these are not the only manifestations of the national style that can be found in the walls of this house.

Readers familiar with Lviv will be reminded of the building of the Galician Savings Bank (1891) on Svobody Avenue (today the Ethnographic Museum). This is a very characteristic structure, with a rounded rotunda on the corner and a beautiful dome. The Peremyshl Narodnyi Dim, of course, is similar to it. The Savings Bank is 10 years older, built in the style of the late Neo-Renaissance. The Narodnyi Dim in Peremyshl, on the other hand, is a model of a new trend, which soon became known as well — though not yet here, in Galicia, but in Dnipro Ukraine.

Among the old buildings of Peremyshl are many traditional Austrian Secession style ones. The Ukrainian home is not one of the obvious examples of this style, as one might expect. Of course, Art Nouveau is not the only face of the modern style. However, in this case, not only the smoothness, plasticity, and decorativeness of plant and oriental motifs are striking, but also the deeply thought-out symbolism and character inherent in Ukrainian cultural heritage. And this, of course, indicates that the Peremyshl Narodnyi Dim is one of the younger examples of nothing but the style of Ukrainian Architectural Modern (UAM).

According to researchers, this style was developed by the Dnipro-region architect and graphic artist Vasyl Krychevsky. The first building of this Ukrainian modern style was the Poltava Provincial Zemstvo, designed by Krychevsky in 1903 in Poltava. UAM developed, in particular, in Central Ukraine, the Poltava, Kyiv, and Kharkiv regions. Artists associated with Vasyl Krychevsky worked on it there, with the support of cultural patron, politician, and public figure Mykhailo Hrushevsky.

The development of UAM is somewhat delayed compared to similar processes in Central Europe, where under the influence of national ideas, certain architectural styles appear among the Czechs, Hungarians, and Poles. Poles had different types, including certain manifestations of neo-Gothic (Vistula-Baltic style) architecture, houses built in the style of manors, and buildings with elements of Zakopane mountain construction. The latter were created and popularized, in particular, by the famous artist and architect Stanisław Witkiewicz.

This trend was understood by one of the then authorities and patrons of Ukrainian culture in Galicia — Metropolitan Andrei Sheptytsky. As a man from the Polish intelligentsia, he observed what was happening in Polish architecture and tried to influence prominent Ukrainian architects in Lviv on this model. Until then, they created almost exclusively classical Viennese Secession, and were also supporters of various historical revival styles. However, taking an increasingly active national position, they understood very well how important it was among other peoples of the empire to create their own, holistic national style. In this context, it is worth mentioning the great Ukrainian builder of Lviv Ivan Levynskyi and his business partner and teacher Julian Zachariewicz, as well as the circle of architects associated with them.

Where is Peremyshl, and Where is Poltava

The process of creating styles continued among Ukrainian architects of the Russian and Austro-Hungarian empires independently until about 1908, when one of the leading artists of Levynsky’s office, Oleksandr Lushpynsky, went to Kyiv and became acquainted with Krychevsky’s designs. However, when all this was happening, the People’s Home in Peremyshl had been built for 4 years.

Typical motifs of the Ukrainian architectural style are, first of all, folk ornaments of rural construction and a strong connection with the heritage of the Cossack Baroque as well as with the wooden sacred construction of Eastern Ukraine (including the churches of Sloboda Ukraine). Along with UAM, a very characteristic Hutsul Secession was also developing, which to some extent reflected the Zakopane trends in Poland (there are a few such buildings in Przemyśl).

The interior of the Natinoal Home (as a very early example of UAM) combines elements of classical Secession and Ukrainian styles. On the one hand, the walls and ceilings of the rooms are covered with plant frescoes, Arabic flowers and oriental patterns, and the floor is lined with extremely fashionable at the time painted cement tiles, made in different corners of the empire. On the other hand, in the heart of the house — the theater hall, there is a wonderful collection of purely Ukrainian folk ornaments.

The Heart of the Building

The theater hall of the Narodnyi Dim in Peremyshl is a separate architectural monument, inscribed in the state heritage list separately from the whole building (which has a similar status). Examining its decorative elements, we can conclude that the work was completed a few years, and maybe even a few decades, later than the rest of the building. The style of the hall is Ukrainian modern à la Vasyl Krychevsky. Among the rich decorative details you can see numerous trapezoids, solar signs, viburnum flowers and sunflowers, not executed in the Secession style but in a purely folk style. These are Cherkasy-Poltava sunflowers, flowers of Central and Eastern Ukraine. Farther under the arches of the balconies are imitations of columns like in the choirs of Ukrainian Baroque wooden churches. And the ceiling is decorated with beams, typical of folk architecture, and with Hutsul cones in the coffers [sunken panels in a ceiling or vault — ed.]. By the way, there are not as many Hutsul ornaments here as one might expect — most of the decorations depict symbols of the Dnipro region.

Above the stage hang two interconnected symbols of Western (lion) and Eastern (Archangel Michael) Ukraine. The trident above them was installed in the 1990s during one of the renovations of the hall. Then theatrical masks were replaced by this national symbol. The color of the walls was once different — according to the layers of paint, the original color was crimson. But the hall was repainted many times during its existence.

One of them is that we do not know what was depicted on the coat of arms found under the dome on the façade of the building. Apparently, these were the same symbols as above the stage in the theater hall, but there is no certainty about this. None of the old photos we have found so far can unambiguously help us determine the appearance of this coat of arms.

The second, most important, question concerns the architect. With a clear conscience we can say that all the signs in heaven and earth indicate that the Narodnyi Dim in Peremyshl was designed and built by people from the circle of Ivan Levynsky and Julian Zachariewicz. The latter was the architect of the above-mentioned Galician Savings Bank, the former designed and built not only several dozen famous buildings in Lviv (among them the George Hotel, the Jewish Hospital, the Pedagogical Institute, the Kastelówka residential complex, the Opera House, and the Railway Station), but also several Narodni Domy in smaller towns of Galicia (for example, in Stryi and Kamianka-Buzka). The masterful interior of the theater hall confirms that it was created by the best specialists, even visionaries of that time. Unfortunately, we do not currently have any documents to support these conclusions.

The Narodnyi Dim in Peremyshl was built in 1904, a year later from the famous Provincial Zemstvo in Poltava. On the cornerstone of the Peremyshl institution, the initiators wrote that it was a “temple of the resurrection of Rus’-Ukraine.” All this took place several years before the proclamation of the Act of Unity. The great national consciousness and clear goal of Ukrainian unity are indicated not only by the political or social activities of local activists, but also by the desire to see the symbols of the Dnipro region and Poltava-Cherkasy sunflowers in buildings erected in the “far West” over the banks of the silver San River.

One of the main impetuses for the study of the architectural style of the Narodnyi Dim was a meeting with Andriy Klimashevskyi, a candidate of art history in decorative and applied arts, head of the Ethnographic Museum in Lviv, great-grandson of the sister of the man who headed the Narodnyi Dim construction committee, Teofil Kormosh.

I thank him for all the information he shared with me during a visit on a cold autumn afternoon at the Ukrainian Narodnyi Dim in Peremyshl.

Photographs by Wojciech Skorza (owned by the Association of Ukrainians in Poland) and from the archives of the Narodnyi Dim.