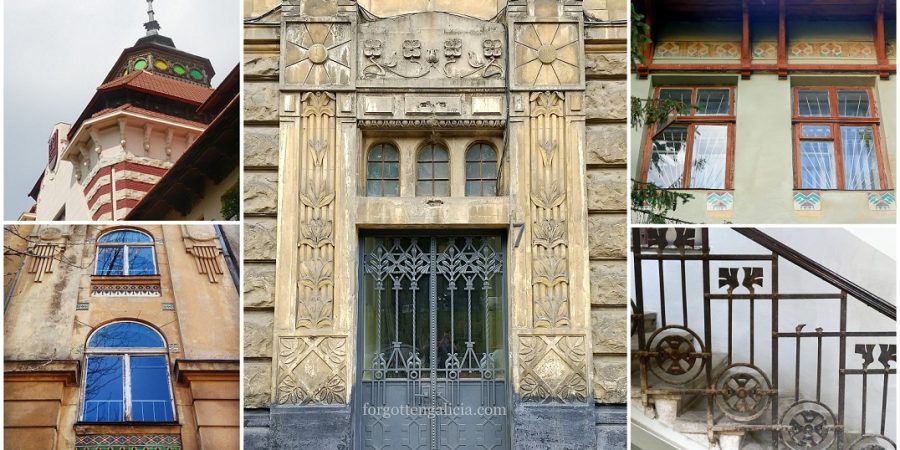 At the turn of the nineteenth and twentieth centuries, a new original art movement spread across Europe and the United States. It received various names: Tiffany (from the name L. C. Tiffany) in the United States; Art Nouveau and “fin de siècle” (literally “the end of the century”) in France; Jugendstil (after an illustrated magazine Jugend founded in 1896) in Germany; Secession Style (Sezessionsstil) in Austria; Modern Style in England; Stile Liberty in Italy; Modernisme in Spain, Nieuwe Kunst (new art) in Holland; Spruce Style in Switzerland.

The transition from historicism to modernism—which took place during this period as part of the struggle against academic art—chronologically coincided with a sharp increase in the national consciousness of nations and national minorities in Europe. Regarding this process, Yuriy Biryulov, a researcher of the Lviv Secession, writes: “An important part of the new artistic vision was symbolism, in which advocates of Secession found a conceptual synthesis of their aspirations and experiences … The symbolist idea of creatively capturing the point of contact of the two spheres of existence—material and irrational—was embodied in practice on the principle of the fusion of objective reality and subjective perception, which became the basis of the aesthetics of Secession … Vibrating, fluctuating, unclosed Secessionist forms and lines were symbols of infinity and the elusiveness of life, the eternal life cycle of nature that connects people with the universe. Cultivating the worship of nature, pagan and pantheistic ideas, the new style revived the foundations of the old Slavic world, the holistic folk perception of reality” (Biryulov, Yuriy. The Art of the Lviv Secession. Lviv: Center of Europe, 2005).

Influenced by the flourishing Secession movement in other parts of Austria-Hungary, the multinational Kingdom of Galicia and Lodomeria started to develop a distinctive architectural style based on national flavor, which in academic literature and in general use is called the Lviv Secession. It incorporated various trends of national or regional Secession styles: Goral, Hutsul, Galician, Polish-Ukrainian, Ukrainian, Jewish, Armenian, Czech, and so on.

The biggest development in Eastern Galicia, primarily in Lviv in the late nineteenth to early twentieth centuries, was the architectural style known as the Hutsul Secession. The Hutsul Secession was an attempt to create a national Ukrainian style of architecture that was based on local folk architecture. The style was influenced by the national romantic interpretation of the Vienna Secession—the striking style of Austrian architecture. The main source of inspiration for the creation of the new Ukrainian national style was the vernacular art of the Carpathian highlanders (especially the Hutsuls). In 1890, Lviv architect Julian Zachariewicz attempted to refine the aesthetics of the Carpathian style. Later, theories of the new Eastern Galician style were presented by Edgar Kováts in the book The Zakopane Way (1899) and Kazimierz Mokłowski in a series of articles and the book Folk Art in Poland.

In its most dramatic form, the ideas of the Hutsul Secession were manifested in the works of Ivan Levynskyi’s architectural firm, where well-known architects such as Tadeusz Obmiński, Oleksandr Lushpynskyi, and Lev Levynskyi worked. This style can be found not only in Lviv but also in the buildings of Stanislaviv (now Ivano-Frankivsk), and other towns of Galicia. It is characterized by expressive forms: distinct elastic configuration of doorways, windows, and awnings; and sophisticated contours of roofs with large slopes, sometimes decorated with towers, similar to the bell towers of Hutsul churches. The decor and color range of folk art are manifested in the use of metal and ceramics in decorating buildings.

Richly decorated with polychrome ceramic panels using folk motif patterns, moulding, and metalwork, with its peaked roofs resembling Boyko churches, the Dnister building is one of the best examples of Hutsul Secession in both Lviv and all of Ukraine. The building played an important and symbolic role in the cultural life of the Ukrainian community in the early twentieth century.

Bursa of the Deacons of the St. Yura Cathedral

The building has a decorative wooden Boyko-style roof with a decorative cornice and smooth walls with bright majolica. The ceramic friezes under the windows and the roof as well as the window fringes of the second and third floors were inspired by Ukrainian embroidery using high-quality polychrome ceramic tiles (manufactured by Ivan Levinsky’s factory) with brown, yellow, green, and white colors — the traditional colors of Hutsul folk art.

Dormitory of the Academic House

Built in Secession style featuring Hutsul ornamentation as well as elements of the Zakopane style. Adaptations of the wooden construction of the Carpathian highlanders as well as Hutsul applied art can be found in this building. The majolica friezes with Hutsul ornamentation, which serve as the main accent of the building, are located under the eaves as well as on two tiles under each window of the upper floor. The Academic House was an important center for Ukrainian students in Lviv.

Bursa of the National House Institute

The building was a dormitory for boys, with a museum and library of the National House Institute. This Hutsul Secession building is richly decorated with ceramic tiles and metal elements. The building, designed to house 200 students, was equipped with the latest technical innovations of the early twentieth century.

Gymnasium and Bursa of the Ukrainian Pedagogical Society

The this folk-stylized building is a vivid example of Ukrainian Late Secession architecture. Today it is the building of the Ukrainian State Forestry University.

The clinic was constructed as a sanatorium of the Red Cross; until the First World War it belonged to doctor Kazimierz Solecki.

The building was constructed in the Art Nouveau style with elements of the Zakopane style and Hutsul motifs. The main façade has a protruding central avant-corps crowned with a side wall roof with a sun motif characteristic of the Zakopane style and carved corbels. The façades are adorned with ceramic panels with Art Nouveau ornamentation and a stylized rusticated belt separating the socle section of the building riveted with natural stone.