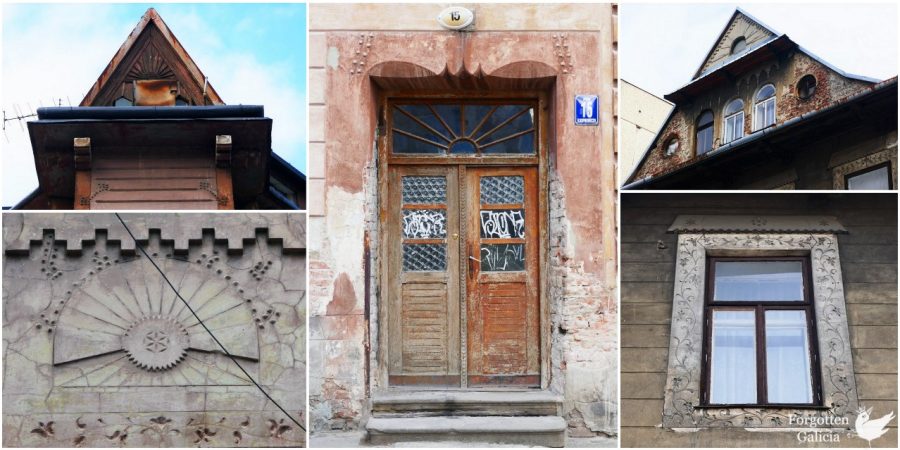 Zakopane Style (Styl zakopiański) architecture is inspired by the folk art and architecture of Poland’s highland region known as Podhale. The style was conceived in the 1890s by architect Stanislaw Witkiewicz and named after the region’s main town — Zakopane.

The Zakopane Style combines wooden framing and reinforced stone structures, typical of Goral cottages, and traditional folk motifs with elements of Art Nouveau. The main features include a radiant sun on the gable, intricate flower carvings, especially on window and door frames, and the six-petal rosette solar symbol.

As the style spread outside of rural Podhale to urban centers of Galicia and Poland, it was cleverly adapted to brick and stone construction, with only limited details made from wood. As a result, elements such as the timber cottage outlays, together with locking joints and lattice-work, were transformed into masonry while popular motifs traditionally carved in wood were applied to stone and appeared in non-traditional places.

For example, several such buildings were constructed in Lviv — the capital of Galicia, the administrative region that Podhale and Zakopane were a part of.

At least two Zakopane Style-influenced buildings were erected in the small city of Przemyśl, geographically located between Zakopane and Lviv.

The two such buildings that I came across in Przemyśl both feature the prominent radiant sun on the gable as well as traditional engravings on the window and door frames. The stone facades of both mimic a cottage’s timber walls together with the locking joints typical of log construction.