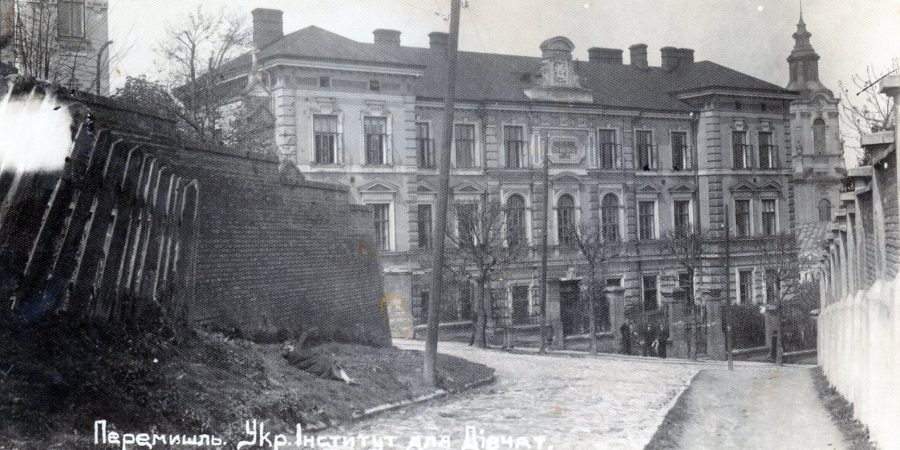 After coming under Austrian rule, Peremyshl (Przemyśl) became a major Ukrainian political, cultural, religious, and education center. By the 1880s the city had become the second-largest center (after Lviv) for Ukrainian secondary education in Galicia. It was home to a number of vocational, elementary, and boarding schools as well as the Peremyshl Greek Catholic Theological Seminary, a bilingual women teachers’ seminary, and the Ukrainian Girls’ Institute in Peremyshl.

In June 1895, an appeal to the public was issued to encourage girls to enroll in the school. The first director of the Institute was Maria Prymivna.

The Encyclopedia of Ukraine, writes that the Ukrainian Girls’ Institute was “a secondary school for young women, supported by private funds, in which education was provided in the Ukrainian language. It was opened in 1895; in 1903 the higher grades of the institute were transformed into a lyceum, and in 1920 into a gymnasium. The school, which boasted the first forced central air heating in Eastern Europe, a tennis court, a large library, and a massive three-story building that is still in use today, was the fruit of private initiative and fund-raising efforts. It was founded by Ukrainian parents and Ukrainian Catholic clergy who wanted to provide Ukrainian women with the opportunity to acquire a secondary education to prepare them for admission to university or teacher training institutes. The school accommodated about 200 boarders, and another 50 or so day students. It employed female and male faculty members and prided itself on progressive educational approaches, which included sports, foreign languages, and sciences. The school was closed down by Soviet authorities in 1939.” [From the Encyclopedia of Ukraine, vol. 5 (1993).]

Students had medical care, and were active in athletic, cultural, and educational associations, in particular the scouting organization Plast.

An Inside Look – Family Photographs

My grandmother studied at the Institute in the early 1930s and fortunately several photographs from her time there have survived. These images offer us a glimpse into the everyday lives of the students.

For Ukrainian speakers, here is an interview with Nadia Bohdan (born 1924) about her time at the Institute.

On the centenary of the Institute, a book was published. Scans can be found on Facebook.

1 thought on “The Ukrainian Girls’ Institute in Peremyshl”