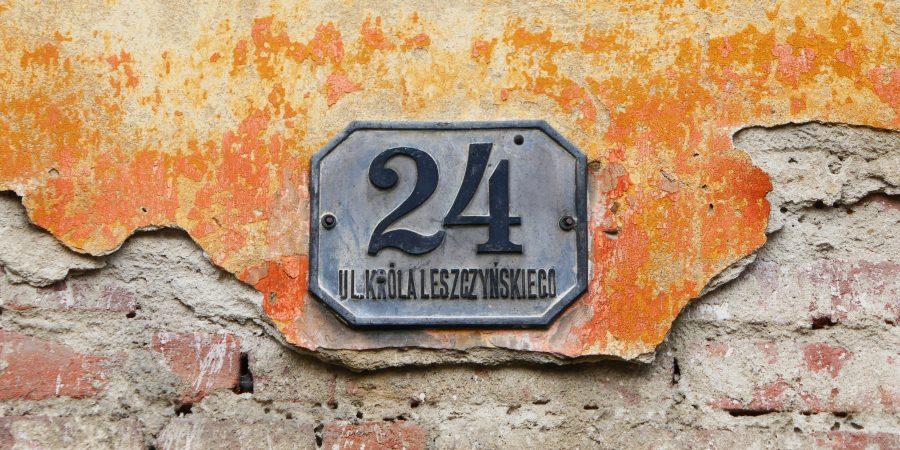 It is not uncommon in Przemyśl, Poland, to find two, three, or even four different street signs on one building—dating to different periods and regimes: the Austrian Empire, interwar Poland, Communist Poland, and modern Poland. This is because in Poland there was never a campaign to remove Polish inscriptions from the urban landscape, as the Soviets did in places like Lviv. Furthermore, throughout the years (with the exception of a few years during German occupation) the official language of the city remained Polish, unlike in much of eastern Galicia, where today Ukrainian is the official language.

Thus when each new regime renamed a street or introduced new regulations for the type of street signage, a new sign was mounted near the doorway while the old ones were generally left in place. As a result myriad historical signs can still be found in Przemyśl.

While many of these signs still correspond to the name of the street today, quite a few display names that for decades have been outdated.

This is the case especially with the Austrian-era metal plaques, which can be found around the city. These, by the way, are similar to the pre-WWI street signs that can still be found in other places of the former Austrian Empire like Lviv (though not many) and Vienna.

For example, Biskupa Antoniego Radylowskiego Street (ul. Bisk. A. Radylowskiego) no longer exists — but such a street sign still does. Today the street is named ul. Komisji Edukacji Narodowej.

On Łukasińskiego Street there is still a sign for ul. Szpitalna (Hospital Street), which was the name of the street from 1895 to 1932. From 1932 to 1939 it was named Łukasińskiego; during German occupation (1941-1944) Lukasinskistrasse; and from 1944 Łukasińskiego.

This villa not only has an old street sign but its own name — Villa Marya.

Alongside the prewar metal plaques, we can find multiple other street signs, from the interwar wall-mounted street lights with street names and building numbers to the pale blue Communist-era signs and the brand new cobalt blue signs.

As Elements of Architecture

Street names and building numbers were sometimes integrated into the architecture of a building. A beautiful example is this prewar window pane with an inscription of the street name. The pane on the right would have had the inscription Dworskiego, the rest of the street name which was and still is named after Aleksander Dworski. What’s more, the pane with the inscription carries a war wound: in the lower-left corner a trace of what looks to be a bullet hole from one of the wars. Fortunately, the glass wasn’t shattered and it continues to persevere even over one hundred years later.

Near the doorway still remain two other street signs, one from the interwar period and the other from Communist times. But that’s not all…

Hidden just inside is yet another sign, the oldest of them all — a conscription number.

Indoor conscription signs in Lviv are hard to come by (I’ve only seen one), but in Vienna many interior ones still remain.

In addition to the above, I’ve come across one other example of an interior conscription sign in Przemyśl.

An Excursion Back in Time

All in all, half a dozen different types of street signs reaching back to the nineteenth century still adorn Przemyśl’s buildings. But rather than help us orient ourselves in the city as they once did, today they help orient us through the city’s past. For each sign is now a clue to what came before, a reminder of a different time, a different regime, a different political agenda, a different social order, a different aesthetic, a different world.