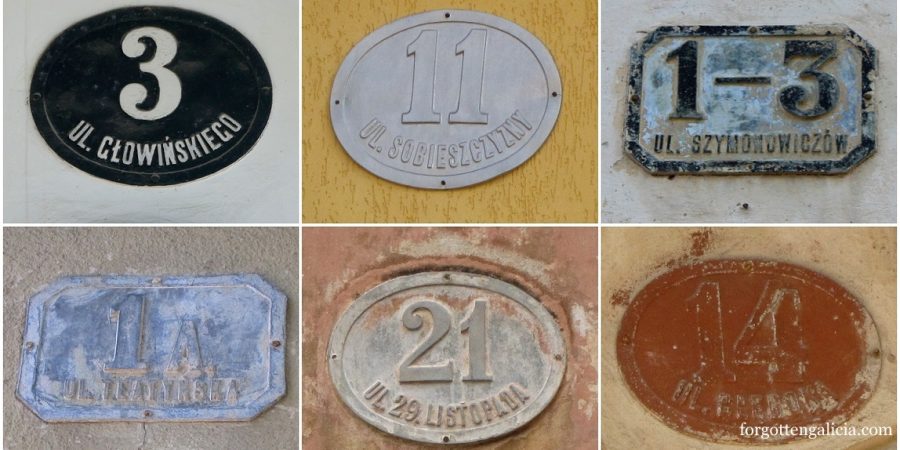 Considering how many times street names and the official language were changed in Lviv, it’s quite miraculous that we can still find street signage from previous eras around the city.  But in fact, quite a few prewar Polish-language street signs remain hidden (sometimes quite literally under paint or plaster) in Lviv’s urban landscape.

On Renaming Streets in Lviv

In the last century, Lviv found itself under a new regime half a dozen times, the major ones being the Austro-Hungarian Empire until 1918, the Polish Commonwealth until 1939, the Soviet Union until 1941, Nazi Germany until 1944, the Soviet Union until 1991, and independent Ukraine ever since. Each new political regime made widespread changes to street names in order to reflect the new social and moral order and to eradicate former versions of the national past from the cultural space. In the case of Lviv, the name changes were accompanied by language changes, altering back and forth between Polish, German, Russian, and Ukrainian. Furthermore, even when there wasn’t a regime change, street names were renamed to reflect new events, heroes, values, policies, etc.

Consequently, Lviv’s street names have been renamed dozens of times. One of the best examples is Prospekt Svobody, the grandest boulevard in Lviv, which has undergone no fewer than 17 name changes over the past 200 years. Being the city’s main boulevard, it’s no wonder that each new political elite understood the importance of choosing a name that would reflect the new order and create a new collective memory. “There aren’t many cities in Europe where streets changed their names as often as in Lviv. As an example, let’s look at the history of names of the main street of Lviv, Prospekt Svobody. From the end of the 18th century this Lviv central avenue that leads up to the Lviv Opera House was called Lower Ramparts. Later its left side was named Karl Ludwig Lower and right side Karl Ludwig Upper. Starting from 1871 the right side was renamed into Hetmanska. In 1919 the left side of the street, bearing the name of an Austrian politician, was changed to Legionow. In 1940 the Soviet invaders of Lviv renamed the street to 1st May Street. In 1941 the German invaders changed it to Opernstrasse for one side, and Museumstrasse for another side. From 1942, as the Nazis tightened their grip on Lviv, both sides of the street were called Adolf Hitler Platz. In 1944, for a short time only, pre-war names Legionow and Hetmanska returned, and then again the 1st of May Street. From 1959 it was called Lenin Avenue, and from 1990 Prospekt Svobody (Freedom Avenue) as a wave of political changes swept through Lviv,” from Lviv Ecotour.

(More about renaming streets in Lviv can be found in an article by Chris Wilkinson “Facelifting Lviv: Where the Streets Had So Many Names.” Another great resource is the Center for Urban History’s Lviv Streets project, where you can search any street and find a complete list of the former street names.)

On Types of Signage

In 1871 sequential numbering and official street names were introduced in Lviv, replacing conscription numbers. Consequently, Lviv’s streets received Polish names, replacing the former German street names. In some cases the names were just Polonized, while others were renamed. This occurred around the time that Galicia received autonomy within the Austro-Hungarian Empire and Polish gained the status of official language.

As part of the new numbering system, plaques, which included both the street name and building number, were attached to the facades of each building. These plaques were either rectangular or oval, a nd generally white with a colored frame that indicated a specific district. For example, street signs in the Krakivskyi district were white with a green frame.

The next regime change came in 1919 after the Austro-Hungarian Empire collapsed and Galicia fell to the Second Polish Republic. In this case, however, many street names remained the same as the Polish language as well as Polish historical and cultural themes were already represented in the nomenclature of the city. Thus plaques were only replaced if there was a name change – but now all new plaques were rectangular.

Taking the above into consideration, we know that the remaining prewar street signs found today on Lviv’s buildings date no earlier than 1871, and that the oval plaques date no later than 1919. Furthermore, as many street names stayed the same after the Second Polish Republic took power over Galicia, likely many of the rectangular plaques also date from before 1919. Though one example of a plaque that without any uncertainty dates to the interwar period is the sign for “ulica Oficerska” (see collage below), for the street didn’t come into existence until 1928.

Not surprisingly, old street signs still found in other cities of the former Austria Empire such as Vienna and Przemyśl resemble the prewar signs in Lviv. Below is perhaps one of the few if not the only bilingual prewar sign that existed in Lviv. It still hangs on the gate to St. Yura’s Cathedral but can be easily overlooked as it has been painted over and blends in with the wall. The fact that the cathedral was and is so important for the Ukrainian Greek Catholic Church and in turn for Ukrainian national identity could explain why Ukrainian was also used on the address plaque. While plaques on each individual buildings with the street name and building number were the most common, there were also other ways in which street names were displayed in the urban landscape. Rather than standard signs, the name of the street (as well as building number) could have been incorporated into the architecture and decoration of a building. Hence, we find street names engraved on facades, sketched onto glass, painted on tiles, integrated into ironwork, or attached letter by letter to a facade in a style matching the building. On the Fate of Prewar Street Signage

Although we can still find many examples of prewar street signs around Lviv, their numbers are dwindling as they become victims of building renovation or theft. Many have been relocated to public areas and now decorate the walls of cafes, in particular inside the cafe Sztuka and in the courtyard of the Polish restaurant Kupol (thought today fewer remain than originally), allowing us to continue admiring them. New Signs Made to Look Old

A few establishments and private residents have gone back to the prewar aesthetic and so on some buildings we can find new street signs made to look old. Here the current Ukrainian name of the street was placed over the former Polish name on a original plaque: