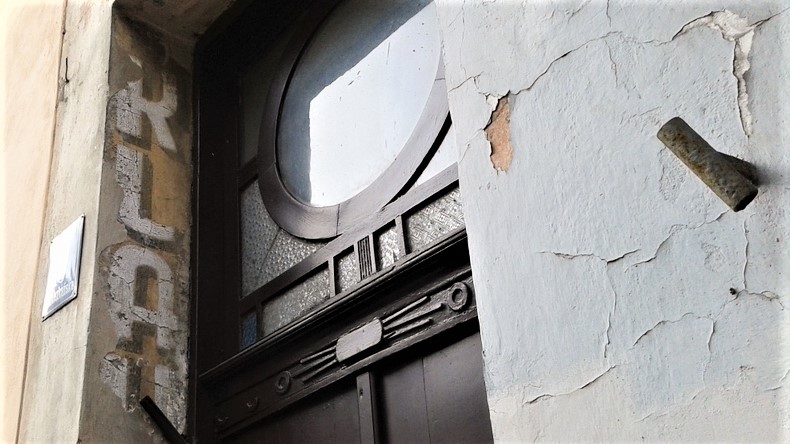 Today a small city in eastern Poland, Przemyśl (Peremyshl in Ukrainian transliteration) was once one of the major cities in Galicia.

Przemyśl’s population consisted of many nationalities, including Ukrainians, Poles, Jews, Germans, and Czechs. According to the Austrian census of 1830, the city was home to 7,538 people of whom 1,508 (20%) were members of the Ukrainian Greek Catholic Church, a significantly larger number of Ukrainians than in most Galician cities. And in the census of 1910, Przemyśl had 54,692 permanent inhabitants, of whom 47% were Roman Catholics, 30% Jews and 22% Greek Catholics.

Today, various remnants of the city’s prewar past remain. In particular,  examples of prewar signage are visible on several of the city’s buildings. Like in Lviv, most of these ghost signs are in Polish — in Przemyśl, as in Lviv and other Galician cities, Polish was the official language and so Ukrainian-language signage was much less common. Nonetheless, traces of other languages that were once widely spoken in the city do exist — in particular I’ve come across a ghost sign in Ukrainian and one in Yiddish. I’m certain many more existed and are patiently waiting under layers of paint and plaster to be once again exposed to the world.

Painted red and white stripes can be found in Przemyśl — examples of which can still be found in Lviv. These date from the interwar period when Przemyśl was part of the Polish Republic and marked a type of store that carried consumer goods, such as cigarettes and sugar, that were regulated by a state monopoly.

Below is prewar photograph of Przemyśl showing hand-painted signage as well as a storefront with painted stripes.