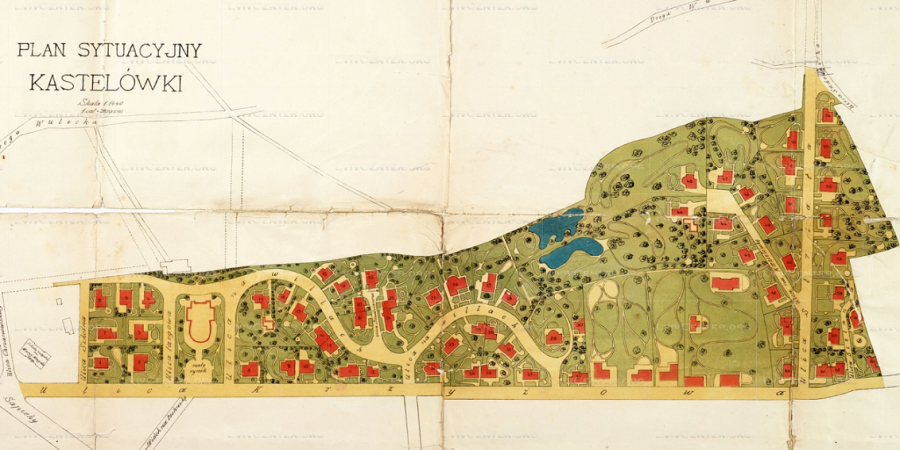 In the 1880s, two prominent Lviv architects Julian Zachariewicz and Ivan Levynskyi (Jan Lewiński) initiated the construction of a villa district in an attempt to create in Lviv a “garden city.”

As part of the project, 64 villas with adjoining gardens and several auxiliary buildings were to be built, which would have provided for the independent functioning of the community.

The architects designated an area west of the center to build the district, which they named Kastelówka (Kastelivka in Ukrainian). The name comes from the Castelli family, Italian builders who arrived in Lviv at the end of the sixteenth century to help reconstruct the city after numerous destructive fires. By the end of that century, the Castelli family owned an estate in the area of the modern Sakharova Street, which was marked on maps with the name “Kastelówka.” Although the estate of Kastelówka was not within the limits of the newly created district, the architects nevertheless chose the name for their project.

The starting point of Kastelówka was the School of Maria Magdalena, which was erected in 1883 at the intersection of the modern streets Bandery and Chuprynky. The main axis for the district was to be the street “Na Willakh” (At the Villas) — today Kotliarevskoho. The natural adornment of the site was supposed to be Sobka Pond, which they marked as two separated reservoirs, as seen below in the Kastelówka plan below.

In 1889-1892 the first villas were constructed between the beginning of Kotliarevskoho and Chuprynky Streets, and over the next decade dozens more were built around the neighborhood.

In the end, however, the architects were not able to fully realize their vision — the neighborhood was too close to the center and the picturesque villas were quickly overshadowed by multi-story urban buildings.

One of the only blocks where the architects were able to more or less realize their concept was the villas and gardens just west of Maria Magdalena School. Though even here the integrity was compromised when a firehouse was built in between the villas.

A covered market was supposed to be built on the next block, but instead tenement buildings went up.

Moreover, in 1929 a new tram line was laid through part of the neighborhood, which disturbed the peace and quiet. And on the the last free plots Modernist buildings were built.

The Remaining Villas of Kastelówka

Despite the fact that Kastelówka never became a full-fledged garden city, the neighborhood is nevertheless one of the most picturesque and greenest in Lviv. Walking through its winding cobblestone streets you can still come across many villas and large garden plots. Especially when the gardens are in full bloom and the villas drown in greenery, the spirit of the unrealized garden city can still be felt. And addition to the charming villas, Kastelówka has many beautiful and ornate Secession tenement houses, which together with the villas make this neighborhood an architectural wonder.

At the very beginning of Kastelówka are three adjoining villas — some of the first to be built as part of the garden city. In the summer they are hidden behind their lush flower beds and trees. They also have a common garden plot in the backyard.

On the same block as the three adjoining villas is this building with original ceramic decor.

Around the corner on the same block is one of the most unaltered villas of Kastelówka. Having undergone little reconstruction, the tall roof and authentic decor including ceramic ornamentation and carved wood remain.

A bit up Chuprynky Street is this villa-turned-bank. Although it underwent reconstruction many times, and eventually was turned into an apartment building, the original turret as well as original ceramic decor remain.

Still farther up Koltiarevskoho is this villa, which has elements of folk-inspired decor.

Next door is one of the landmarks of the neighborhood. This villa stands alone, as if on an island, completely surrounded by garden beds and by streets on three sides. Much of the authentic architectural details survive, including bright ceramic decor and carved details. Like many of Kastelówka’s villas, in summer time it drowns in lush greenery.

Returning to Kotliarevskoho Street is the first of another set of three adjoining villas. Several theories exist as to the history of this particular one. One version is that it was built 1905-1906 according to the design of Edmund Żychowicz. Another version is that the villa was built at the beginning of the construction of Kastelówka in the 1890s, designed by Zachariewicz and Levynskyi, but then in 1906 was rebuilt according to a design by Władysław Aleksander Sadłowski. And a third theory is that the architect was Sadlowski and that Żychowicz’s firm constructed it.

The next building is one the most unique–and my personal favorite–villas in Lviv, and the only structure in the city with a wooden gable cross. From 1913 architect, architectural theorist, scholar, and art historian Jan Karol Zubrzycki Sas owned the building.

The third building of the complex underwent massive reconstruction and was turned into an apartment building. Originally it had just two levels, a tall roof, and a mansard.

This villa was built for Jan Daschek — the owner of a factory specializing in artistic and construction metalwork. Forged metalwork from his factory can still be found on the building, such as the ironwork on the glass entranceway and balconies, and the large decorative anchor plates. The villa also has original majolica inserts.

A few houses down is the villa named Ludmila — as can still be seen displayed on the facade. The villa was commissioned by Antoni and Ludmila Bobrich. Built almost two decades later than most of the other villas, this one was designed in Secession style.

At the end of Kastelówka is the former “na Kastelowce” (in Kastelówka) Street, which was built in 1890 according to the architects’ plan. The villa, named Julietka, was built by and for Julian Zachariewicz and his son Alfred. It is a unique red-brick villa, which was inspired by the Red House, a significant Arts and Crafts building located in Southeast London. Fortunately, many elements of the interior have survived such as the winding wooden staircase, stained-glass windows, and even some of the original built-in furniture. Unfortunately, this villa is hidden behind tall fences and only on special occasions can one visit it.

1 thought on “Kastelówka: Lviv’s First Attempt at a ‘Garden City’”