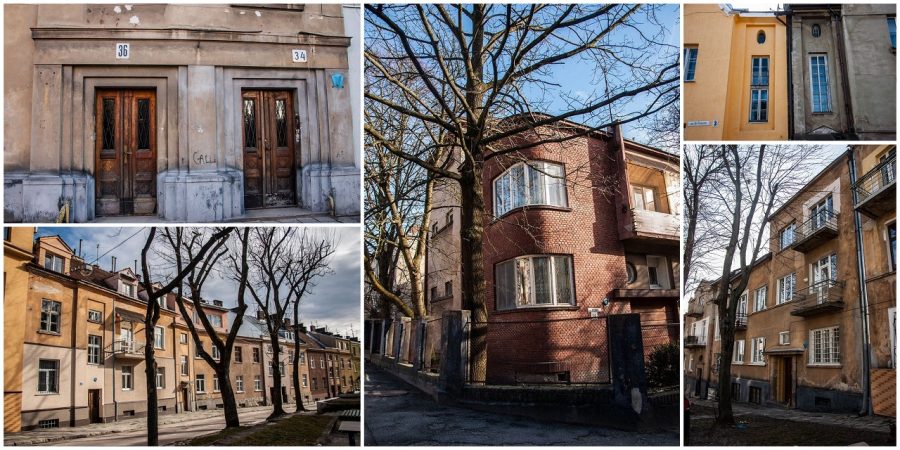 After overcoming World War I and the financial crisis, housing developments (often called “colonies”) started to be built in Lviv for private and professional organizations. Many were inspired by Ebenezer Howard’s concept of a garden city. One such project was the residential quarter built for the Vlasna Khata building cooperative.

“How Sheptytsky’s favorite architect built housing for Ukrainians, or the microworld near Kaiserwald”

When building houses, modernists thought not only about the architectural composition, but about the microclimate that would surround the future project. For architects of functionalism, it was important that their buildings had not only comfortable planning and beautiful shapes, but also a pleasant area around them; therefore, green areas of the city, often near parks, were selected for their housing developments.

If you head up Piskova Street, and then wander between Kharkivska, Ostrozkoho, and Riepina Streets, you will find yourself in such a modernist microworld. This picturesque area near Kaiserwald is now practically part of Znesinnia Park. It is brimming with functionalist villas and flower gardens.

On Piskova a number of buildings were designed in the style of early functionalism. The houses were erected between 1927 and 1929. They were built for the Vlasna Khata (Own Home) Ukrainian building cooperative.

The designer of the projects and head of construction was the famous Ukrainian architect Oleksandr Pezhanskyi, the son of the prominent Galician architect Hryhoriy Pezhanskyi. Oleksandr built in the style of functionalism and Art Deco.

A friend of Metropolitan Andrey Sheptytsky, Oleksandr Pezhanskyi is said to have been the metropolitan’s favorite architect. In fact, Sheptytsky’s Narodna Lichnytsia (The People’s Hospital) on Ozarkevycha Street was designed by him. Pezhanskyi was also a member of the artistic commission at the Metropolitan Consistory.

The houses of the Vlasna Khata cooperative are located at the modern-day addresses 26-40 Piskova St., 22-38 Kharkivska St. and 3-7 Ostrozkoho St. The houses do not have the features of pure functionalism, but are heavily influenced by early modernist forms. Here we see narrow elongated rectangular windows and Art Deco door trims, but the entrance portals are designed in explicit functionalistic forms. The houses are two-storied with carefully arranged mansard roofs, some of which, unfortunately, have been altered by the buildings’ newest residents.

According to archival documents, a number of officials and educators lived in the complex of houses on Piskova. In particular, an official Emil Melnychuk resided at no. 26. Another official, Yevstakhi Muryn, lived at no. 34 on the ground floor. Vlad Klyniak had an apartment at no. 36, Volodymyr Dudkevych, a school inspector, lived at no. 38, and an official, Roman Levytskyi lived at no. 40.

The two buildings with steeply pitched roofs on Ostrozkoho particularly stand out. They are more characteristic of Art Deco than functionalism, as can be seen by their oval windows and sharp corners.

The houses of Vlasna Khata on Kharkivska look simply marvelous, even despite the “improvements” to the facades made by the residents.

In this neighborhood there are also classical functionalist buildings. At 21 Piskova there is a handsome functionalist structure. The corner house is perfectly integrated in the landscape.

The stepped roof turns sharply to the street intersection. The rounded balconies smooth out one of these corners. The stone building rises up together with the ascent of the street.

The interior of this building is well preserved with original window frames, black and white patterned floor tiles, authentic bent brass handrails that are in perfect harmony with the black strips of tiles on the floor.

In the main corridors authentic veneer doors remain almost everywhere. The wood is not uniform, each has its own patterns. The building in general preserves the spirit of the era, the simplicity and elegance of perfect proportions.

We know that one of the co-owners was Yakub Khromanskyi. He owned three floors of the building. At the beginning of Soviet occupation he fled to Germany.

Another classic of functionalism is located at 9 Kharkivska Street. This house also has no significant decoration, but is ideally designed for the landscape. Its third floor rises along with the street and lines up to the height of the adjoining building.

Immediately opposite at 8 Kharkivska Street is a very orderly functionalist building. Here we see both Art Deco and classical forms — a kind of slice of Lviv architecture of the first half of the twentieth century.

The building has a fairly small entrance portal, a delicate, barely protruding avant-corps adorned with horizontal ribbon windows and a porthole at the very top. A rectangular protruding gable perfectly completes the composition and unites it with its taller neighbor. The balconies add some bulk to this rather light architectural composition.

In general, the whole area near Kaiserwald is a paradise for lovers of Lviv modernism. The style can be found everywhere.

Riepina Street swings down to Lychakivska Street, in rhythm with the street’s bends emerge functionalist villas. Judging by the nature of the buildings, they are from the 1930s.

The corner house at no. 19 immediately catches the eye. Although without special ornamentation, the composition of the facade is worth noting: two front doors on either side of the corner, portholes above both entrances, the left wing that curves together with the street, and the right one with conventional geometric shapes. According to archival documents, the owner of the house was Malvina Stets.

The villa at no. 14 is a beauty. The ornamentation is found in the clinker bricks and the rustication of the curved window frames. Even a place for a porthole was found.

At the bottom of the street there is another building which is not as expressive, but is restrained in its style and aesthetics. The composition is quite strict, everywhere we see sharp geometric shapes in the design of the windows and of the balconies.

Original fencing can be found outside the building. The owner of the house was Jerzy Olszewski from the construction company.

Even today the neighborhood maintains its sense and comfort.