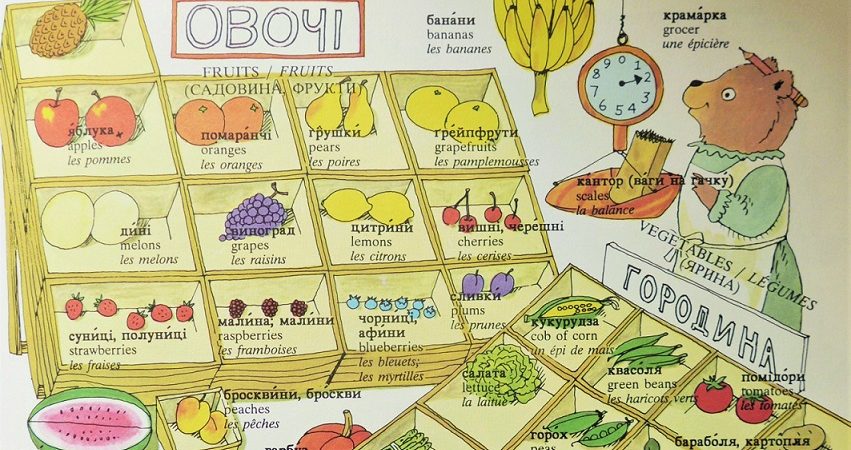 When I moved to Ukraine, I had to learn a whole new Ukrainian vocabulary. It turned out that I had grown up speaking a Galician/diasporic Ukrainian, which used many dialectisms, Polonisms, and archaisms. To keep track of the differences between the two lexicons, as well as to document the way my family spoke, I started to put together a dictionary.

I ended up with a rather comprehensive list, and as I know many other families in the Ukrainian diaspora use a similar lexicon to the one I grew up with, I decided to make it public. Ultimately, it’s an attempt to help preserve the western Ukrainian dialect that is still spoken in North America, but which is slowly being lost.

This of course is not the first project to make a dictionary of words from various Ukrainian dialects. There have been many lists of Lviv or Galician words published online, such as this one, as well as books such as Gvara, and a recently published comprehensive 800+-page dictionary called Лексикон Львівський. The latter (pictured) has many of the words in my list, but not all. Thus I feel there is still a lack of a similar project for the diaspora language.

For historical reasons, a distinct dialect of the Ukrainian language emerged in Galicia. Since Ukrainians in Galicia lived in close proximity to Polish-speakers and the Polish language—there were many intermarriages, the official and dominant language in towns and cities was Polish, etc.—the Galician dialect has many similarities to the Polish language. Furthermore, Galicia, as opposed to much of the rest of Ukraine, was never part of the Russian Empire and so Ukrainians in Galicia had fewer restrictions on their language and less Russian influence. Once Galicia joined the rest of Ukraine in the Soviet Union, however, the language there too started to change, due to Russification, standardization, and the natural evolution of language.

On the other hand, the Galician dialect, including its lexicon, accent, and orthography, was rather well preserved in the diaspora.

Several factors contributed to this, including:

To clarify, when I use the word “diaspora” here I mean specifically the community that descended from the third wave of immigration (1940s-1950s), many of which came from western Ukraine, in particular Galicia. Though as the two prior waves of immigration also originated in western Ukraine (Galicia, Bukovina, Subcarpathia), the older Ukrainian communities probably spoke (and speak) quite similarly. However, it was the members of the third wave who eventually came to dominate community life in several regions of North America, especially in cities like Chicago.

I grew up in the Ukrainian community in Chicago, where many of the Ukrainian organizations such as Ridna Shkola, Plast and SUM, used a language/dialect similar to the way my family spoke. Thus even if someone had ancestors from central or eastern Ukraine, they were likely exposed to the Galician language if they were involved in the community. In fact, my paternal grandmother was from central Ukrainian and came from a Russian-speaking family, but her husband was from the Boyko region of the Carpathians and so for the most part she picked up the western Ukrainian dialect.

Some of the “diaspora” words can be heard today in western Ukraine, but generally only in rural areas and from the older generations. Thus even in the region of the its origin, the dialect (especially heard from a young person) sounds rather archaic and old-fashioned to the average Ukrainian. While some of the words are in fact archaisms, most are just dialectisms (or even just original Ukrainian words) that were preserved in the diaspora but lost in Ukraine.

There are, however, a handful of these words that are used widely among all generations in Lviv and other Galician cities (for example, “ровер”). Other words are finding their way back to the modern Lviv language as there is a heightened interest in the old Lviv, the old language, and for example many new restaurants and cafes have chosen to use precisely these old Lviv/Galician words in their menus.

Comparison to Polish and Russian

For many of the words in my dictionary I added the Polish and Russian translations. Using this comparison, one can notice that a majority of the “diaspora” words are similar to Polish, and many of the “standard” Ukrainian words are similar to Russian. That said, by no means are all such cases Polonisms or Russisms, but one must keep in mind that Polish had a significant influence on the language spoken in western Ukraine, and that the Ukrainian language did undergo heavy Russification, which after WWII affected the language spoken in western Ukraine (and so there are a lot Russisms).

The book Contested Tongues: Language Politics and Cultural Correction in Ukraine by Laada Bilaniuk covers some specifics about the Russification of Ukrainian. A few examples can be found in this table:

Nonetheless, there are cases when the opposite is true—when the “diaspora” word is closer to both Polish and Russian than it is to standard Ukrainian (for example, “важне”), or closer to Russian than to Polish or standard Ukrainian. This may be explained by the fact that it is just an older Slavic word, as Andrew Sorokowski wrote in a comment under one of my previous posts: “some Old Galician words strike modern Ukrainians as russified, such as ‘vozdukh’ for ‘air’; there, however, are Old Church Slavonicisms, disseminated by the Greek-Catholic clergy in the 19th century.”

It’s also interesting to see when a word in one language has a completely different meaning in another (for example, “склеп”).

Thus, except for a few obvious cases, I cannot say when a word is a Russism, Polonism, or just an older Slavic word. In any case, I don’t want to prove any dialect or word is better or more authentic, but rather want to have a visual comparison of the languages.

Some of the common changes to the “diaspora” language that I have come across in standard Ukrainian:

Some of these observations have to do with orthographic rules introduced in 1933, which aimed to Russify the Ukrainian language. The table below (from Iryna Farion’s Мовна Норма) outlines precisely some of these changes to the official Ukrainian orthography that was adopted several years earlier. The standardized Ukrainian 1929 orthography (the left-hand column), also known as Skrypnykivka, was continued to be used by Ukrainians in Galicia and the diaspora even after the 1933 orthographic reforms, but once Galicia fell under the Soviet Union after WWII, it too had to conform to the official orthographies. Thus only the diaspora has followed the Skrypnykivka rules, to a certain extent, until today.

Among the ways the Soviet orthography of 1933 aligned the two languages was by eliminated the letter “ґ” since it was an original feature of the Ukrainian language. And while this letter was resurrected in Ukraine in 1999, to this day it is rarely used in the country. On the other hand, the “ґ” was always used in the diaspora and so it can be found in many words, which in Ukraine are said with a “г” such as ґудзик, ґітара, ґазета, балаґан, ориґінально.

The history of the usage of the letter “ф” in Ukrainian is quite interesting and quite complicated as well. According to Wikipedia, in Slavic languages the letter is used primarily in words of foreign origin (Greek, Latin, Germanic).

These are the standard variations today in Ukraine, while the variations with “f” were common Galicia and are still common in the diaspora.

Though who knows, maybe when these things were introduced to western Ukraine, they immediately took the “f” variation.

I also once heard that the word “Хортиця” (the name of the island of the Zaporizhian Cossacks) roots from the Latin word fortis (strong) or rather maybe a variation of “fortress” or “fortification,” but the sound “kh” was used instead of “f” as it was more natural for Ukrainian.

Finally, another notable difference is the the way numbers 11 through 20 are written (and accordingly, pronounced). In Galician Ukrainian these numbers used to be written “одинайцять,” “дванайцять,” etc., while today the standard spelling is with a “д” instead of a “й”: “одинадцять,” “дванадцять,” etc. The Galician spelling, for example, can be found in the Hand-book of the Ruthenian Language (Galician) published in Canada in 1905. I’ve had a difficult time switching to the “д” variation and so have stuck with the Galician pronunciation, which often elicits comments from friends in Ukraine who tell my I sound like their grandmothers when I say these numbers.

A few more of my observations on the differences between “diaspora” language and standard Ukrainian:

All in all,  I have a compiled comprehensive list with nearly 600 words, which I made on Google Spreadsheets. For many words, I’ve also included the Polish and Russian translations, as well as a comment on the meaning or usage. The list can be sorted by category, part of speech, type of change, etc., which can used to find trends.

The “Diaspora” column is for the most part the way my family speaks. In most cases the words are common among the “diaspora,” but there may be some cases where specific words are only known/used by my family.

In the “Standard Ukrainian” column I tried to add the most accepted/standard word currently used in Ukraine, but sometimes I added a word that I hear the most, even if it may not officially be the most correct.

In addition to different words, I’ve also included words or phrases that are declined differently as well as differences in some common phrases and sayings.

There are of course cases where the standard Ukrainian word is known and used in the diaspora as well.

There may be some mistakes in the Polish and Russian columns, as I am not fluent in either. I had some help from friends, but also some help from Google Translate.

I welcome any corrections or comments, as all of the above are just my observations. I will continue to add to the list and make corrections.

For a link to the the full online dictionary, CLICK HERE

In 2019 Ukraine adopted a new orthography, which brought back certain features of the 1929 orthography mentioned above. This, in turn, has made peculiarities of the “diaspora” language now accepted in Ukraine.

Below are some examples of rules that were introduced in Ukraine, which were always accepted in the diaspora: