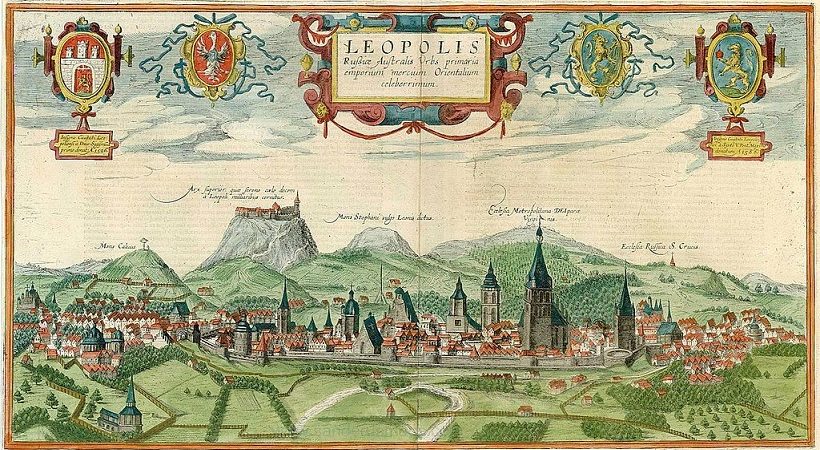 When the Austrian Empire acquired Lviv in 1772, the city’s fortification walls and moats were in a particularly poor state. Five years later, the new rulers began to pull down the fortifications as part of their urban planning strategy, which, among other aims, sought to unite the historic center and the outlying districts. By the late 1820s, most of the fortifications were demolished and in their place a modern ring boulevard was being created, which was also to have an administrative and cultural function.

Pictured below is the new recreational promenades that were constructed in place of the city’s outdated fortification walls:

As a result of this new urban planning strategy, only a few traces of the original fortification structures remain today: fragments of the city walls and gates along with the city’s three historical arsenal buildings.

Construction of Lviv’s fortifications began in 1362, which over the next couple of centuries resulted in four powerful lines of defense.

The first line of defense, constructed of stone and bricks, was called the High Wall and encirled all of Lviv.  It originally had 17 gates, each maintaind by a different guild. A few fragments of this wall and gates can be found on Prospect Svobody (the reconstructed Shopkeeper’s Gate next to fragment of original wall); behind the City Arsenal (a fragment of the wall and the Cobbler’s Gate); and next to the Royal Arsenal (traces of the wall and the Mason’s Gate).

The second line, or the Low Wall, with bastions, dates from 1418. Remnants of two of these bastions can still be seen today: on Pidvalna Street (first image below) and in the basement of Gwara Restaurant (second image below).

The third line was constructed at the end of the 15th and early 16th centuries to defend against medium-caliber enemy artillery.

One of the artillery bastions from the third line was preserved—today known as the Gun Powder Tower (1554-1556). This tower not only was used for defense against heavy artillery, but also served as a stockpile of gunpowder. In periods of peace, this tower served as a storage facility for grain.

The fourth line of defense was built in the 17th century, and consisted of massive artillery bastions. The structures were built to fortify the city against mobile large-caliber enemy artillery.

The city’s defense was further strengthened by two arsenals as well as by the Low Castle in the southwestern corner of the fortifications.

The City Arsenal (1554-56, 1709) served not only as a fortification structure, but also as a warehouse for weapons and ammunition. In 1795, after significant reconstruction and rebuilding, the arsenal became a prison, and in 1800 a military compound.

Like the City Arsenal, the Royal Arsenal (1639-1646) was attached to the defensive High Wall. The building was used to store urban weapons, as well as to cast church bells. The arsenal fulfilled its functions until 1939. Now the only reminder of its function is the two cannons mounted above the entrance. Today it is owned by the State Archives of the Lviv Oblast.

Outside the City Walls

Outside the city walls, in addition to the High Castle located on a hill overlooking the city, several monasteries near the city center had their own fortifications, which strengthened Lviv’s defense system.

The largest and best-preserved fragment of Lviv’s medieval defense structures is the Hlyniany Gate (1618), which was part of the Bernardine Monastery.

The Sienawski Arsenal (1630-35), Lviv’s third historic arsenal, was constructed to protect the nearby St. Maria Magdalena Church and Monastery (1600-1612). Later it was a palace and today houses the Omelyan and Tetiana Antonovych Palace of Arts.