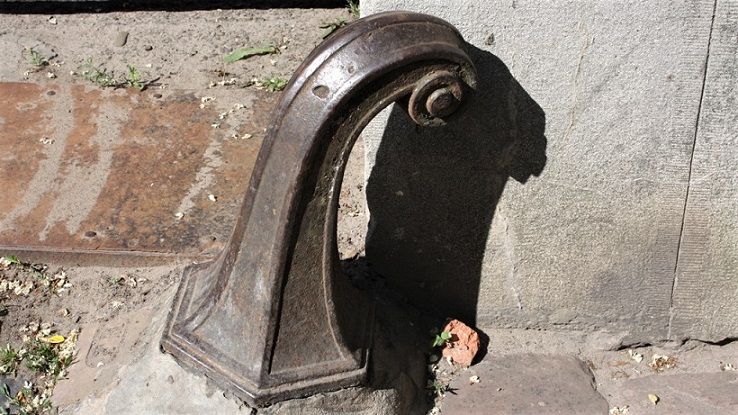 Guard stones are exterior architectural elements made of metal, stone, or concrete located at the corners of entranceways, carriage driveways, or gateways to protect walls from carriage wheel damage.

Once an important element of the horse-drawn transportion infrastructure, guard stones have become largely obsolete as cars do not pose the same danger to the walls. Unlike modern cars, the wheels and hubs of horse-drawn vehicles protruded beyond the vehicle’s body.

Furthermore, there are many cases where these old driveways have become pedestrian only, again making the guard stones redundant.

Guard stones are found all over the world.  Today, early guard stones are considered cultural heritage objects and some countries, such as France and Belgium, even protect them under specific heritage regulations.

In Lviv, these traces of the old horse-drawn transportation infrastructure can be found all around the city’s historical districts. In addition to Lviv, I’ve documented them in several other cities in Europe as can be seen via my “guard stones” tag.

The metal ones come in several shapes and designs, but the most common seem to be the ones found in the second two photos below. Some have been partially buried; tips of others have been cemented in walls. Some are rather plain, others more elaborate. I was once told that the first one below was located in front of a building that used to be a bordello (hence it being so phallic). I’m not sure if my friends were being facetious or not (haven’t been able to confirm this); nevertheless, it’s an interesting thought…

This one differs quite a bit compared to other ones I’ve seen:

This next one is unique because it is not located at the corner of an entrance way, but rather protects a curb in the driveway of an old palace:

These are extra obsolete as this former gateway has been bricked up:

Here the guard stones are elevated – at one point carriages came into the courtyard and passed through this entrance. Now it looks a bit strange with the stairs and elevated guard stones.