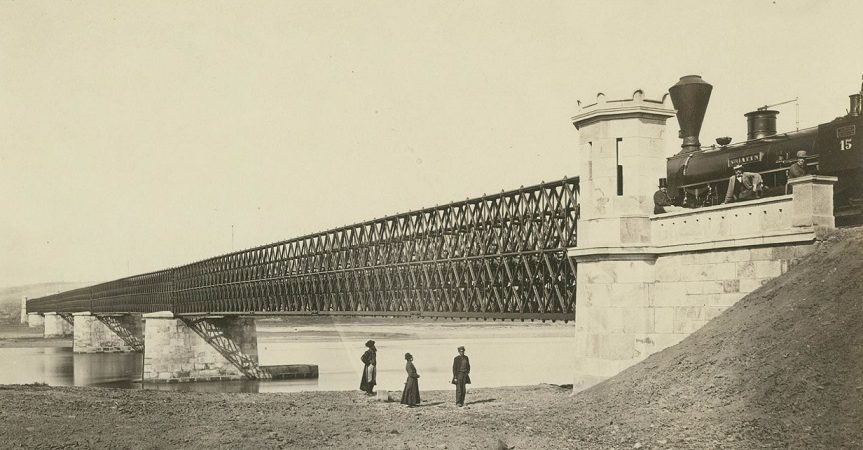 The railway first came to Lviv (Lemberg) in 1861, connecting the city to Przemyśl as part of the connection from Krakow. In 1866 a railway was built connecting Lviv to Chernivtsi (Czernowitz). As a result, the capitals of two Austro-Hungarian crownlands Galicia and Bukovina were connected not only to each other, but also to the very center of the great empire — to Vienna.

“This train could bring an ordinary citizen of Chernivtsi or Lviv to Vienna within 24 hours, a city which had seemed as distant as the moon. Hence, the year 1866 was for the people of Galicia what Neil Armstrong’s steps were for the people of the Earth in 1969.

“On September 1, 1866, the first train from Vienna arrived at the Chernivtsi railway station. Locals were both fascinated and scared. One hundred and fifty years ago, the railway was associated with accidents and problems for local producers. Now Galicia and Bukovina could receive goods from the West — which were of higher quality and often cheaper than local ones. On the other hand, the train seemed to be saying to every single person: Now you are in Europe too!

“Together with the railway, to the Eastern outskirts of the Austro-Hungarian Empire came modernism, bringing along economic and cultural development. Within one empire began what today is referred to as globalization. To participate in this process, one merely had to buy a train ticket, choosing between three classes, like today one can do merely by connecting to the Wi-Fi network.

“Chernivtsi, Ivano-Frankivsk, Lviv, Przemyśl, Krakow, and Vienna became connected by one route and one aesthetic field. It remained this way until the great catastrophes of the twentieth century when the single cultural space was torn apart, leaving behind only disparate memories and portraits of Franz Joseph hidden under beds,” from The Locomotive Called “Europe.”

These photographs were taken two years after the railway to Chernivtsi was built. They show Lviv’s (Lemberg’s) Chernivetskyi railway station, which was built in 1866 near the main railway station (built 1861), the stations in Ivano-Frankivsk (Stanisławów) and Chernivtsi (Czernowitz), and stations in smaller towns, as well bridges and rivers (Dnister and Prut) along the way.