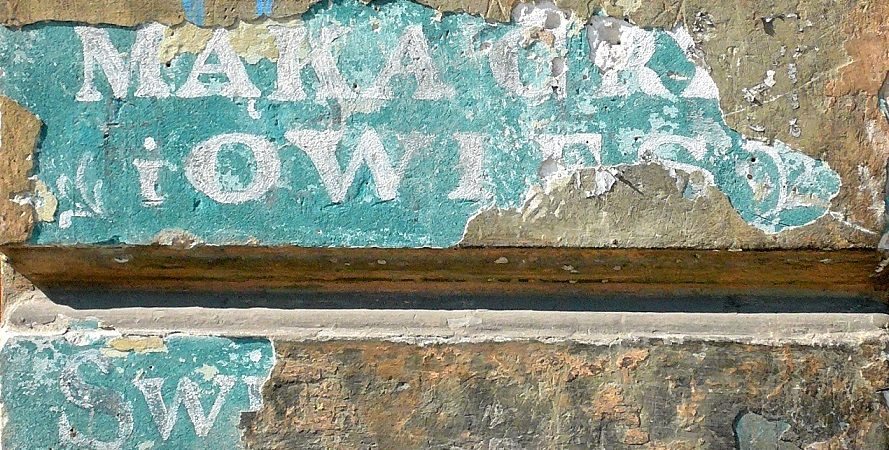 I love ghost signs. These messages from the past are one of my favorite parts of the urban landscape. I get overly excited every time I discover a new one.

Ghost signs (aka fading ads or brick ads) are old hand-painted signs that have been preserved on a building for an extended period of time and often advertise products, brands, or businesses that no longer exist. They generally date from the late nineteenth and early twentieth centuries, when advertisements were painted directly on walls of buildings by skilled sign painters. Starting in the 1960s new types of ads were introduced, and the old practice of sign painting started to become obsolete.

From what I’ve observed, ghost signs in Galicia and Lviv differ somewhat from those found in western Europe and the United States. In the West, ghost signs are most often found on the sides of brick buildings and advertise a brand or a product, while in Galicia many (at least most of the ones that are still around) were painted on the front of stores to advertise what products were for sale. Most examples still visible today advertise food items like cheese, butter, tea, or other items such as shoes, hats, school supplies, footwear.

One of the best preserved ghost signs in Lviv is on a former milkhouse. A list of the various dairy products it sold was painted on the facade of the storefront, each section painted in a different language: Yiddish, German, and Polish (from left to right). There is an old photograph of the building when the signs were not yet ghostly but actually still served their orginal function: to inform the multilingual public as to what sort of goods the store sold.

As they are still visible today, it has become a ghost sign. The storefront is no longer a milkhouse, but a copy center. So in addition to the painted signs advertising sour cream and milk, modern signs inform the public as to what services the copy center provides.

This is how it currently looks after it was repainted:

Around the city there are many other ghost signs. Some have been around for decades, others recently uncovered, others almost entirely faded, others with just a few letters visible.

In Ukrainian or Cyrillic

In the UK and the US, many of the ghost signs remained overtime, left exposed and unpainted even after a business or product became obsolete. Occasionally, new ones are discovered upon demolition of later-built adjoining structures.

The situation in Galicia is quite different—largely because of its Soviet history, for when the Soviets took power after WWII, the majority of hand-painted signs were plastered or painted over. One likely reason was to eliminate the presence of any language other than Russian from the urban landscape. And the other major reason was because most of these stores or brands suddenly ceased to exist as private businesses were expropriated.

So for many decades many of these signs were hidden under layers of paint. Some started to be exposed as plaster or paint began to crumble from the walls, while others were exposed as buildings were renovated, especially in the post-Soviet years. Unfortunately, most of the ones found during renovation are only exposed to the public for just a few hours until they are repainted and lost again. However, there is also a trend to preserve and restore the newly found ghost signs, as there is more and more appreciation for Lviv’s prewar heritage. (And there is also a trend for new businesses to paint their ads on their storefronts in the old school way, as can be seen here and here.)

These two are examples of signs that were visible for years, but eventually found their doom (both were painted over in the last few years):

When this pharmacy was renovated many years back to become a clothing store, Polish ghost signs on a the facade listing such products as paints, varnishes, soap, wax were revealed, but not for long — they were soon painted over again:

Just as the signs (in Yiddish and Polish) on this old storefront were exposed only for a few hours in the summer of 2011 during renovation:

And this beautiful ghost sign advertising a laundry in the Pidzamche neighborhood was revealed in 2014, and then sadly covered back up a couple years later:

On the other hand, when these ghost signs were uncovered in 2012, the owners of the new cafe preserved them:

Just as these beautiful ghost signs were restored when uncovered in 2012. However, in recent years graffiti has been painted over parts of it:

In addition to time and weather, there are also curious people who take it into their own hands (literally) to liberate signs that are already partially exposed and reclaim the pre-Soviet history—de-Sovietizing the landscape, as I like to call it. See more examples of ghost sign liberation here.

Another interesting phenomenon (which is also fairly common for ghost signs in the West) is multi-layered ghost signs (aka as palimpsests)—when even older signs are visible under newer layers of paint and words. Signs were repainted regularly to keep up to date with the latest design and color trends, as well as to stay up to date with the shop’s available products and services.

This hat ghost sign is my favorite—note the ghosts of hats visible under the top layer of paint:

Unfortunately, this ghost sign—favorite among locals—was painted over in the fall of 2021.

Old signs sometimes featured hand-painted manicules, a pointing hand symbol once commonly used as a direction pointer. A couple of examples can be found in Lviv, such as this one, located in corridor, in which the manicule is pointing toward the “wychód” (a Polish archaism meaning “exit”).

A unique feature of Lviv’s (and Galicia’s) hand-painted signs is the presence of painted stripes, which designated certain kinds of stores. More about Lviv’s painted stripes can be found here.

Black and yellow stripes date from the times of the Austrian Empire (pre-1918).

These are signs located on exposed sides of buildings, sometimes above the rooftops or on the entire side of a building. Today, some have been covered by modern-day billboards. More examples can be found here.

Not only on the buildings’ facades, but also inside carriage entranceways and entrance hallways advertisements and informative messages were painted. More examples can be found here.

Ghost signs are lovely: they add charm to the city, help us feel the city’s old atmosphere. They are a reminder of a different era—not only of when the landscape was void of neon lights and bulky plastic signs, but of the city’s multicultural and multilinguistic past. They help us understand how people used to live and what products they used. Hand-painted signage was a unique artform within itself, into which people put a lot of time and effort, understanding the importance of aesthetics in their everyday lives.

I’m looking forward to discovering what still hides beneath the layers of time, what new messages we will receive from the past.

This beautiful mural in Passage Andreolli, which is quickly crumbling away (most of the right side with the barrels is gone already), was painted by artists from an avant-garde collective called Artes that existed in Lviv in 1929-1935.

10 thoughts on “Ghost Signs of Lviv: A Look into the City’s Faded Past”