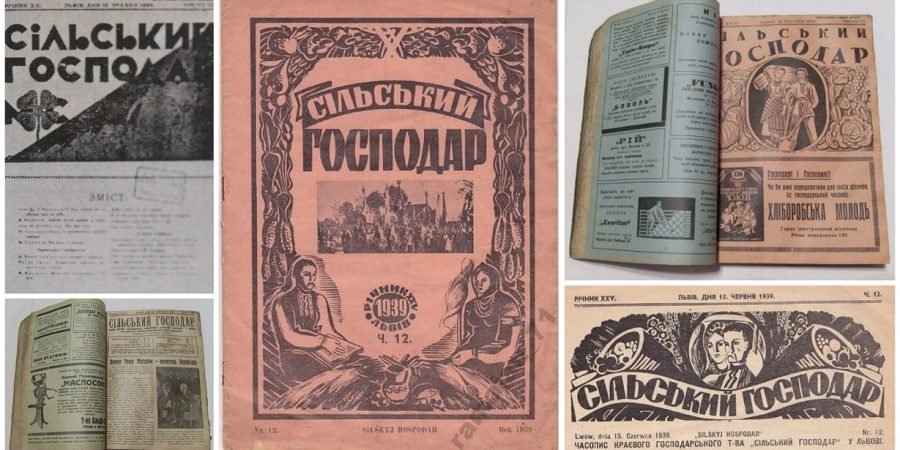 The Ukrainian Cooperative Movement, which began in Galicia in 1883, addressed the economic plight of the Ukrainian people through the creation of financial, agricultural, and trade cooperatives that enabled Ukrainians to pool their resources, obtain less expensive loans and insurance, and pay less for products such as farm equipment. The cooperatives played a major role in the social and economic mobilization of Ukrainians, most of whom were peasants. Silskyi Hospodar, founded in 1898-99, became the most important Ukrainian agricultural organization in Galicia.

Silskyi Hospodar was founded in 1898-1899 in the town of Olesko by two brothers, the Reverends Toma and Julian Dutkevych, to help raise the living standards of Ukrainian peasants by improving agriculture and spreading agricultural education.

About the founding and significance of Silskyi Hospodar, my great-aunt Maria Levytska-Zahorujko writes in her memoirs:

“In the village of Tsishky, Brody region, is the gravesite of my grandmother’s brother-in-law Father Toma Dutkevych, once the village’s Greek Catholic priest. His brother, Father Julian Dutkevych, was my stepfather’s father and was the priest of the village Dubye and later of the village Dmytrіv. In 1898 they established the first Ukrainian regional agricultural association Silskyi Hospodar to teach villagers modern agricultural methods. In order to receive official permission to found the organization, my great uncle Toma traveled to Vienna where he was granted an audience with the Austrian Emperor Franz Joseph. He would become the first head of this association, on the basis of which would emerge Maslosoyuz, Tsentrosoyuz, and other cooperatives in the cities and villages of Galicia. This association in large part would help with the development and improvement of agricultural products, horticulture, and apiculture on our native soils.”

A few years after its founding, the headquarters of Silskyi Hospodar was transferred to Lviv and a year later in 1904 it was reorganized into the Silskyi Hospodar Provincial Agricultural Society.

In 1909, Silskyi Hospodar was restructured into a three-tiered organization with a central office, county branches, and village locals. Yevhen Olesnytsky took over from Toma Dutkevych as president, and together with Stepan Onyshkevych and Hryhorii Velychko, he extended the organization’s activities to all parts of Galicia and took over most of the agricultural work that was formerly done by Prosvita and other cooperatives. In 1910, Silskyi Hospodar had 85 branches, 317 locals, and 12,500 members.

Silskyi Hospodar organized courses and lectures for agricultural instructors and farmers; established research stations and model farms, orchards, apiaries, and livestock and poultry farms; instructed peasants about agricultural machinery and equipment, the collective use of machines, and effective land management; and organized a school of orcharding and farming.

The First World War interrupted the work of Silskyi Hospodar, but its activities resumed on a limited scale in 1920. In 1929, the organization was reorganized, and its primary goal became to provide peasants with theoretical and practical training in agriculture.

During its existence, Silskyi Hospodar published almost 180 textbooks and popular manuals on all aspects of agriculture, almost 120 of them in the interwar period.

The work of Silskyi Hospodar was important not only because it improved the economic standing of Ukrainian peasants, but also because it helped raise their national consciousness.