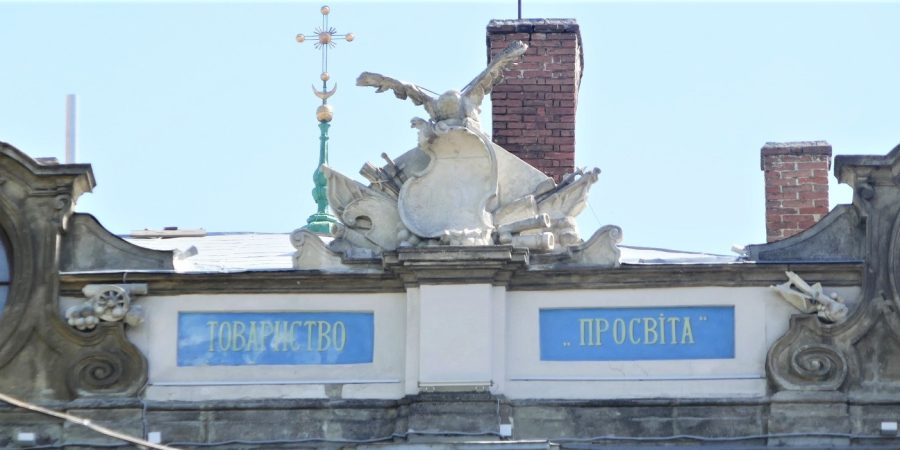 This post kicks off a series of articles Forgotten Galicia will be publishing about Ukrainian societies and cooperatives in the late nineteenth and early twentieth centuries.

The natural place to begin is with the Prosvita society — the oldest civic organization in Galicia that was created to spread education and develop Ukrainian culture. It was Prosvita that laid the groundwork for many of the educational, cultural, and athletic societies as well as economic cooperatives that emerged in the region over the coming decades.

This overview of Prosvita was written by Pauline Noznick for her blog Rooted in Eastern Europe.

What was the Prosvita Society?

Prosvita, which means “enlightenment” in Ukrainian, was founded in 1868 in Lviv by Ukrainian students in order to “know and edify the people.” Until 1914, Prosvita was the most important Ukrainian mass organization in Galicia. Its activities included almost all aspects of Ukrainian life, and it created many cultural, political, economic, farming and sports societies and organizations which eventually became independent organizations.

Why did this group of young people feel that it was necessary to edify the people when free public education was available for children in Galicia up to the age of twelve?

This is a question that is hard to answer because it involves both politics and history. Eastern Galicia was part of the Austro-Hungarian Empire, which was made up of many countries and many ethnic groups. The Austrians kept control of its various peoples by encouraging discord between ethnic groups. This policy worked for a time, but in 1861 Austria became a constitutional monarchy when it recognized Hungary as an equal partner and changed its name to the Austro-Hungarian Empire. Both Austria and Hungary had their own legislatures and capitals, Vienna for Austria and Budapest for Hungary. The Austrians had their hands full dealing the demands of the various ethnic groups, and left the governing of Galicia to the Poles. In the 1860s, the Poles controlled both the local and provincial government in Eastern Galicia. The Ukrainians wanted instruction in the Ukrainian language in the schools, more Ukrainian high schools, more representation in government and recognition of their culture. There were many conflicts between the Ukrainians and Poles, but since the Poles held all the positions of power, decisions almost always favored Polish interests. The founders of Prosvita realized that if the Ukrainian people were to achieve economic and political power, they would have to do it on their own.

Increasing literacy was Prosvita’s first goal. A network of libraries and reading rooms was established in Eastern Galicia. Most villages had schools with trained teachers, and lessons were in both Ukrainian and Polish. One of the first actions of Prosvita was to publish basic textbooks in the Ukrainian language to be used in schools. The society started a network of chytalni (reading rooms) in the Lviv area, where books and other reading materials were available. These reading rooms spread quickly and within a few years, reading rooms were established all over Eastern Galicia.

Increasing the Economic Level of the People

Prosvita’s second goal was to raise the economic level of the Ukrainian farmers in Galicia. Ukrainians in the Austrian Empire were among the Empire’s poorest and under-represented people. Self help was the key, since there was no help coming from the government.

Cooperatives, stores and warehouses were formed to improve the condition of the peasants. Courses were organized to help the farmers modernize and improve farming methods. Itinerant farming instructors traveled the region and taught local farmers how to use modern methods. It started a commercial school in Lviv, a farming school and a women’s domestic school. Prosvita gave scholarship for students to study agronomy, dairying and domestic management. Credit unions were started to enable peasants to save money and to borrow it when necessary. Books were published about farming and other subjects such as Ukrainian history and literature. In 1877 Prosvita started to print monthly booklets which were given to members free of charge and in 1879 established a newspaper.

Prosvita’s support came from membership dues, individual donations, subsidies from the provincial and central government. Government support was small and was often cut off by Polish opposition. Profits from Prosvita’s printing and other operations also funded its activities. Between 1869 and 1906, Prosvita made a small profit of 2,000 Kronen.

By 1900, the Prosvita chytalnia reading rooms became the center of village life, displacing the church and tavern. In 1914, Prosvita had 77 regional branches, 3,000 reading rooms and over 200,000 members. Seventy-five percent of the villages, cities, and towns of Galicia had reading rooms, the largest number of which were in the Ternopil region. It published over three million copies of 495 books, supported 45 scholarships for high school and university students. Prosvita owned its own headquarters building in Lviv and sponsored a large celebration of the 100th anniversary of Taras Shevchenko’s birth there in 1914. The society spread out from Eastern Galicia to other parts of the Austrian Empire with large numbers of Ukrainians. It also was established in Eastern Ukraine, which was ruled by Russia.

Prosvita played a critical role in the growth of national consciousness among Ukrainians and in the improvement of their standard of living.

“The twentieth century has seen many nations rise from the ashes, but there are very few cases of rebirth so rapid and energetic as that of the Ukrainians of Austria… their unexpected and vigorous growth is mostly the result of self-help and hard fought gains.” — Wilhelm Feldman in 1907 (Subtelny, p. 329)