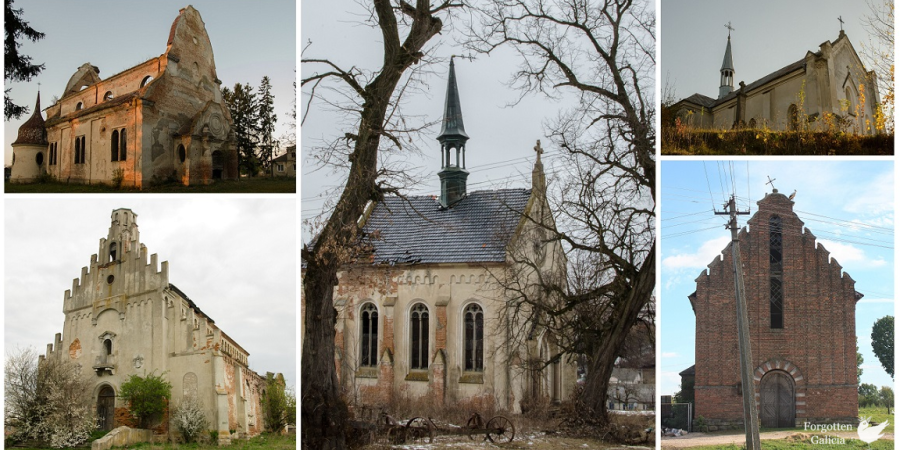 The Eastern Galician countryside — most of which today is located in western Ukraine — is dotted with abandoned Roman Catholic churches (kościoły) that today stand as reminders of the centuries-old Polish communities that once lived there.

Before the war, Roman Catholic Poles made up 21% of the population of this part of Galicia. And while many of them lived in the towns, where together with Jews they made up the majority of the population, 68% of all Eastern Galician Poles were peasants.

This completely changed after the war — the Poles, if they had not been killed or exiled during the war, either moved or were deported to present-day Poland as part of the Polish-Soviet population exchanges.

Under the new Soviet regime, their churches, just like Greek Catholic churches and synagogues, were re-purposed and used as granaries, storehouses, and barns.

But while many of the rural Greek Catholic churches were renovated after the fall of the Soviet Union and today are used for worship, very few kościoły were resurrected due to the absence of Roman Catholics.

And so with every passing year, these structures, now mere carcasses, continue to crumble and slowly pass into oblivion.

Gathered here is but a small collection of all these Galician churches.

The Roman Catholic church (1932-36) in Plisniany / Pleśniany, funded by an anonymous resident of the Polish town of Częstochowa

In 1880, of the 500 residents of Plisniany, 341 were Greek Catholic, 116 were Polish, and 43 were Jewish. In the 1930s, a brick Roman Catholic church with stained-glass windows was built on a small hill across from the Greek Catholic church. Several years later, under Soviet rule, the church was turned into a collective farm mill. When these photos were taken about 10 years ago, the two-level storage structure and traces of flour and grain could still be seen.

During Soviet times, the Art Deco church served as a mineral fertilizer storehouse. In 1993 it was featured in the first Ukrainian detective series “Zlochyn z bahat’ma nevidomymy” based on a work of the same name by Ivan Franko.

The Church of the Assumption of Mary (1797-1802) in Zhulyn / Żulin, funded by the landowner of the village, castellan of Volyn Franciszek Młocki

The neo-Baroque church was built as a defensive structure in 1708 near a fortress. A Latin inscription above the portal states that the church was restored in 1728.

The neo-Gothic church was erected in 1904 (other sources mention the late nineteenth century).

According to the Geographical Dictionary of the Kingdom of Poland (1880-1902), in 1880, 1,527 Roman Catholics, 140 Greek Catholics, and 21 Jews lived in the village. The church was consecrated in 1890, expanded in 1900, and rebuilt in 1936. During the Soviet era, the church served as a school-workshop for tractor drivers, then as a granary, and then as a storehouse for mineral fertilizers.

The neo-Gothic church was last renovated in 1930. During the Soviet era it was used as a collective farm barn.

The Church of the Ascension of the Most Holy Virgin Mary (1589-90) in Yazlovets / Jazłowiec, founded by Mikołaj Jazłowiecki

The late Gothic/Renaissance church was built for the Dominican order in the place of a wooden church.

In 1944 the church’s metrical books were taken to Wroclaw. In Soviet times it was used as a storehouse for mineral fertilizers. To make it easier to load trucks, part of the wall was destroyed. In the 1970s a fire broke out in the church.

The Roman Catholic church (1911-12) in Mylynska / Młyniska, architect most likely from Lviv Polytechnic

In Austrian times, Mlynyska was the summer residence of the Earls from the Łoś family. In 1846-47, almost all the inhabitants of the village died from a cholera epidemic. The earl invited settlers from the central regions of Poland, which the locals called “Mazurs.” The Łoś family lived in a late classicism palace, surrounded by a magnificent park with rare trees. Every year aristocratic youth from all corners of Poland gathered here, spending their time at balls and hunting in the woods. The church was connected to the palace via an underground tunnel. The palace burned down during WWII. When the Poles left in 1945, they took much of church property.

According the 1935 census, 3,200 Poles, 523 Ukrainians, and 31 Jews lived in Loshchniv. In June 1945, the local pastor together with part of the faithful left for Poland, taking with them some of the church property. Until 1991, the church was used to store poisonous substances. Now the church belongs to the small Roman Catholic community of the village.

8 thoughts on “Abandoned Roman Catholic Churches in the Galician Countryside”