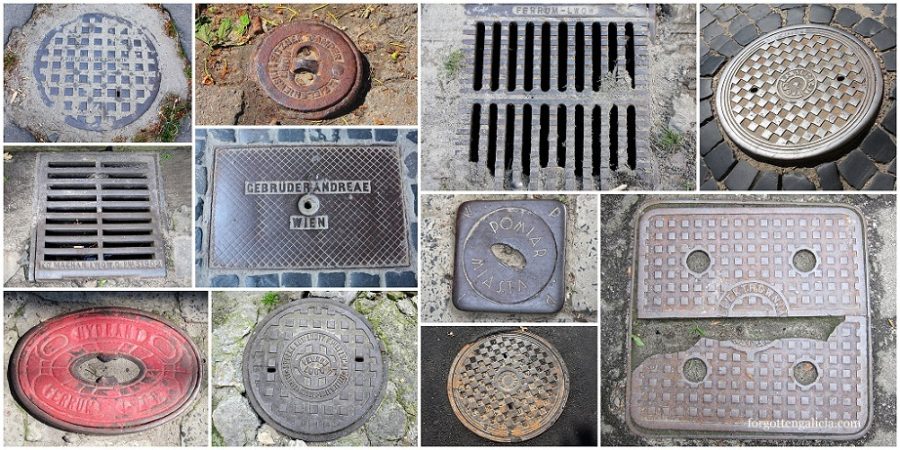 To find traces of Lviv’s prewar past, one must not forget to look down from time to time. Indeed, below our feet are hiding hundreds of manhole and utility covers, which have been serving the city’s infrastructure since before the war. These Austrian- and Polish-era cast iron plates cover buried public utilities and services such as sewers, storm drains, water mains, electricity, telephone, hydrants, etc. Though they continue to serve their original function and prevent unauthorized access, the companies or states that manufactured them are defunct and the language used to convey their manufacturer’s marks has long lost its official status.

The language found on most prewar elements of infrastructure is Polish – the official language of Galicia from the second half of the nineteenth century to WWII. Often the inscriptions found on utility covers include the name of the company that manufactured the product along with name of the city where it was produced (most cases Lwów), and sometimes also the type of utility such as kanalizacja (sewerage).

Various companies manufactured the utility covers that were used in Lviv’s streets; some of the names we encounter the most are Ferrum Lwów, Perkun Lwów, Ant. Kunz., Ed Manchun, Іnż Słowik, Podhorodecki, etc. Often these companies had factories, which produced a wide range of metal products. For example, Perkun Lwów, in addition to manhole covers, produced sinks, distilling equipment, and steam boilers. Antonín Kunz’s Water Pipe and Pump Factory, founded in Hranice (today Czechia) but with branches in Prague and Lviv, manufactured for Lviv manhole covers, water supply network covers, and storm drains – all of which we can still be found today. (Ant. Kunz’s company also built Mukachevo’s water supply system and installed its fire hydrants in 1935, which you can read about here).

Outside the House of Scientists are three German-language Vienna-made cast iron plates – the only rectangular ones in the city.

These small lids cover utilities connected to the city’s water supply network, especially stop valves (“zasuwa” in Polish). Many utilities, especially stop valves  and hydrants, were accompanied with marker plates that were attached to buildings indicating the distance in meters to the utility. This was so that utilities could be found even if buried under mud or snow. See my Old Hydrant and Valve Marker Plates post for more information.

Pomiar Miasta is Polish for “measurement of the city”; PPML most likely stands for Punkt Pomiaru Miasta Lwów (Measurement Point for the City of Lviv). These have something to do with creating the plan for the city for the sewers, water supply, etc.

This one reads Polska Akcyjna Spółka Telefoniczna, which was a Polish telecommunications company that was established in Warsaw in 1922.

Unlike manhole covers, many of the storm drains have dates. The oldest ones date to 1902; there are also many from the late 1930s, especially 1939.  We again see familiar names such as Ed. Machan Lwów, A. Kunz Lwów, Szczerbanowicz, and Іnż Słowik, who produced all kinds of utility cover lids, along with other iron products.

It’s not that uncommon to find typos or grammar mistakes in historical inscriptions and signs. Below we see that the first storm drain reads “Lwowska Fabryka” as it should, while the second one is missing a “w”: “Lwoska Fabryka.”

While there are still hundreds of these historical gems floating in Lviv’s sea of cobblestones and asphalt, they, like all historical artifacts, are not permanent: the inscriptions have worn off of many of them from the millions of feet that have walked over them and others have been stolen for scrap metal. So don’t forget to look down from time to time!

See also: Engineer Słowik and His Enduring Mark on Lviv