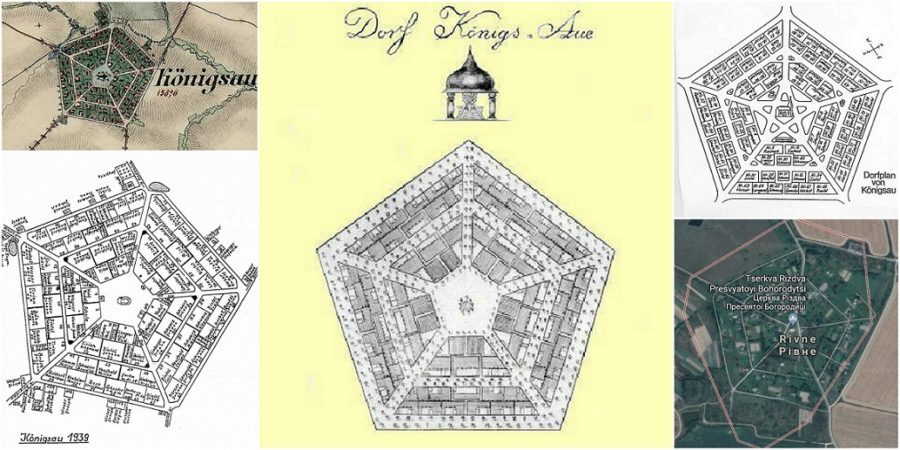 The village of Königsau (“royal meadow”) was established in 1783 by German Roman Catholic settlers as part of the Josephine colonization—a state-funded settlement campaign to reinforce the society of Galician Germans. And while many German colonies were established as part of this campaign, Königsau is unique for it is the only colony in Galicia that was designed in the shape of a pentagon. In fact, even around the world very few settlements were built in this manner.

The distinctive five-sided plan of the village was developed by the Austrian engineer Burgaller. From the pentagonal village green five roads were built, connected by two concentric roads with space for land plots and buildings in between.

The settlers, having received from the Austrian government the most necessary agricultural tools and materials for the construction of farmsteads, quickly cleared the land and began to build a colony. Already by July 1784, 24 houses and stables were completed. And by October 1785, 78 families (300 people) were living in the village.

A Church in the Heart of the Catholic Settlement

The population of Königsau was exclusively Catholic. This was no coincidence as the Austrian authorities aimed to create colonies of the same denomination. About 61% of the colonies were Protestant (Lutheran, Calvinist, or Mennonite), while the rest were Catholic.

Although the settlements were divided by religion, colonies of different denominations could be located quite near. For example, just north of Königsau the Josefsberg colony was founded, whose population was exclusively Protestant. In 1808, there were 400 Catholic inhabitants in Königsau, while in Josefsberg there were 573 Protestant inhabitants.

Lutherans and Calvinists were allowed to establish parishes in the colonies according to the Patent of Toleration. Catholics, on the hand, did not initially build any new churches, with the exception of a few villages including Königsau where churches were included in the initial plan of the settlement. Instead, Catholics joined already existing parishes in nearby villages.

Despite being included in the village’s planning process, Königsau’s first church didn’t appear until 1846. The Church of St. Sebastian and St. Fabian was built in the heart of the pentagon.

After the Fall of the Austrian Empire

After the First World War, Königsau essentially lost its status as Galicia now belonged to Poland. However, even during the interwar period the population of the colony remained mostly German. According to the 1934 census, in Königsau lived 649 Catholic Germans, 4 Protestants, 16 Poles, and 12 Jews, totaling 677 inhabitants.

In 1936, the village was officially renamed Równe ad Medenice (Königsau). The name Równe, a Polish word which has a similar meaning to “au” (“flat meadow”), had been Königsau’s unofficial second name – it can be found next to the name “Königsau” on maps of Galicia from the second half of the nineteenth century.

At the beginning of the next war, Königsau along with the rest of western Ukraine was annexed to the USSR. Soon thereafter, the German and Soviet governments agreed to resettle the Germans in Galicia to East Germany. And so in January 1940, under Soviet supervision, the Germans had to pack up their belongings and leave their homes forever. After the operation, not a single German was left in Königsau.

In 1945, the former German colony Königsau was renamed Rivne.

In 1995-1999, the old church was dismantled and in its place the villagers built the Greek Catholic Church of the Nativity of the Blessed Virgin Mary. In his book Grampa’s Left Arm and Other Stories, Jim Tirjan writes that during the dedication of the new church in 1999, the son-in-law of one of the settlers, who left Königsau in 1940 with the crucifix from the German church, brought the cross back to the village and presented it to the priest.

Today few traces of the German settlement remain. No Germans have lived in the village for over 75 years, their church was dismantled, and their cemetery is overgrown. But Konigsau’s distinguishing feature has survived — today the village is still organized as a pentagon. The distinctive shape is even visible in satellite images of Rivne, as can be seen on Google maps.

Not much about the history of the village can be found in Ukrainian historical literature other than some references to the settlement in documents related to the Habsburg’s German colonization.

On the other hand, the last surviving deportees along with their descendants have kept the memory of the colony alive. There is (or at least was, as the URL no longer works) a whole web portal dedicated to Königsau as well as a specially published monograph devoted to the history of this colony.