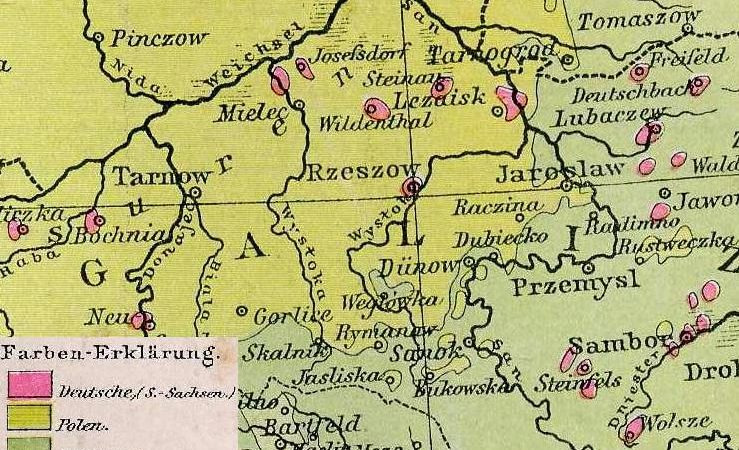 Galicia—a region that came into being as a result of the First Partition of Poland in 1772—came under the rule of the Austro­-Hungarian monarchy. This new land, with an area of 78,496 sq. km., became the largest land in the Habsburg Kingdom, but at the same time presented a new challenge to its rulers. One of the first tasks they undertook was to colonize the under populated and poorly industrialized area. The  monarchy, however, did not want to give up its own citizens; so the idea arose to recruit people from neighboring Prussia.

The initiator of the first German colonization campaign in Galicia was Maria Theresa Habsburg, who issued a decree in 1774 that encouraged well-to-do Protestant craftsmen, merchants, and experts of an advanced level to settle in eastern Galicia. To avoid conflicts with the native agricultural and Catholic population, she designated several of the most commercial towns for this purpose: Brody, Jarosław, Lwów and Zamość¹. The exception was Zaleszczyki, a town already populated by Protestants but economically in decline.

The Empress sensed great economical potential in the underpopulated country; on the other hand, she feared the uncertain geopolitical future of this part of Europe. For that reason, she definitely did not want to invest in the colonization; she wished, rather for quick profits from a new source of tax revenue and an increase in the military power of the state.

The strict screening of those willing to resettle, however, turned out to be too great an obstacle. Most of the applications came from the section of society without value and not eligible to emigrate. The first attempt at colonization passed without an echo. Additional privileges, such as exemption from all tax burdens for a period of six years, exemption from military service, and freedom of religion, also failed to produce the expected effects.

The process of German colonization began on a large scale only after the death of Maria Theresa in 1780, during the reign of her son and successor, Joseph II, who did not fear the loss of the acquired territory. The new emperor personally traveled several times all over Galicia, and also sent his officials for the purpose of becoming familiar with the population density as well as with the existing ethnic groups and their religions. He extended settlement to agricultural lands, increased the tax exemption to ten years, and, most important, subsidized the whole colonization campaign. He practically opened the gates of Galicia to all willing to go, under the conditions that they were not Austrian citizens, were in good health, and were fit for physical labor.

The status of colonists was determined in three categories: privileged, if the family had at least 200 Rhenish zlotys in cash; non-privileged, if the family did not posses that sum of money; and so-called auf eigene Gefahr, those who came “at their own risk.” Notations in the travelers’ passports provided information on their status. The privileged group was directed toward better and more extensive lands, up to 40 korcy,² with large houses and, usually, complete equipment. The non-privileged were offered small farms, around 20 korcy, with minimal inventory. In just the year 1786, some 3,000 horses, 2,440 oxen, and over 5,000 cattle were distributed.

Enlisting colonists was accomplished through the efforts of officials, recruitment commissars, who sent out printed advertisements detailing the numerous privileges for colonists in the new country. Volunteers were accepted in the Vienna office, where passports were issued and their settlement sites were designated. Recorded in the passports were the number of family members and servants, their designated destination, travel routes, and level of assistance. In connection with the mass number of poor people who applied, the decision was made to limit the travel costs; they were paid two pennies per person per mila traveled. [Editor – an Austrian mila was about 7.6 km or 4.7 miles.] The first colonists from Vienna were sent to Biała, and those from Prussia were sent to Zamość.

The passports were taken from the colonists immediately upon arrival at their destination. In return, superintendents gave them official booklets in which data on the family members was entered, as well as all expenses connected with provision of food, quarters, non-returnable allowance for the journey, and, if needed, medical care.

The lands designated for settlement were primarily royal estates, manorial farmsteads, and lands of abolished monasteries. During the most intense period of colonization, inferior land was also designated, such as unused spaces, wastelands, bogs, and clearcut areas. Parceling out the land was done by Austrian engineers; Polish experts were also used. The engineers often hired local peasants or settlers to help with the terrain work. The engineers earned two złotys a day, and their assistants were paid 12 pennies. The engineers’ main assignments were drawing up plots of the land divisions, with detailed description of the measurements,³ and classifying the land. The division of the land into four or five classes determined the amount of future rent.

At the same time, construction work was done under the supervision of custodians, one for each settlement. They supervised the purchase and delivery of building materials and the workers’ labor, and they documented everything in daily reports. At the time the colony was settled, an administration was appointed for each gmina [district], headed by a wójt. Smaller colonies numbering no more than 25 families were represented by so-called przusiężni [Editor-“sworn in,” somewhat like aldermen].

By plan, each colony was to have its own school, centrally located, and even fire-fighting gear, such as water barrels, buckets, and ladders.

Particular attention was paid to the locations where craftsmen were settled, so that they would be where there was real need for their specific professions. Toward this goal, an economic interview was conducted in individual eyrkuły or circles,4 and craftsmen were located on the basis of demand according to the reports. In rural areas, only blacksmiths, cobblers, wheelwrights, and tailors were accepted; the other professions went to towns. Every craftsman who possessed a colonist’s passport received 50 Rhenish złotys to start with, for the needs of his workplace. Those without passports were not equipped, although the government tried to help them find work.

During the years 1781–1789, a total of 120 German settlements came into existence, and over 50 mixed, with a total of about 14,400 people. Settlements were uniform in regard to religion; the most, about 50%, were Protestant, almost 40% were Catholic, and the rest belonged to religious minorities. A settlement in which at least 20 families resided received the status of a gmina or community; a settlement with at least 100 residents had the right to create their own congregation.

The newly created settlements received names in the German language or translated from Polish, and those connected with Polish localities received the prefix Deutsch (Glinik Polski, Glinik Niemiecki).

The most settlements arose in the lands of Eastern Galicia. In the western part of Galicia, the regions of Sandomierz, Nowy Sącz, Bochnia, and Leżajsk were settled.

The Josephine Colonization (named for the Emperor) cost the Habsburg Empire three million Rhenish złotys, and unfortunately, did not live up to expectations. Instead of wealthy people, the poor came; instead of experienced craftsmen and merchants, legions of ordinary peasants. In addition, organizational disorder predominated; in many cases, the new localities were not ready to accept the new settlers.

The commissars themselves also created chaos in organizing the colonization. They sent too many people to one place, did not give them enough information about existing conditions or laws in force, and even acted arbitrarily. Local superintendents, whose duties included care of the settlers and provision of appropriate gear and heating materials, often struggled with assignments that could not be performed. For example, they could not carry out one of their basic instructions, which spoke of “dry quarters, not harmful to health.” Legally, a single superintendent was responsible for 60 to 100 colonists, and so they made use of help from representatives of the group of settles, essential for solving social conflicts. They were compensated with ten crowns a daily.

Furthermore, the promised 10-year period of tax exemption lasted much less time in practice; in the end, the gminy regulated contracts on tax burdens. In other words, there was no tax uniformity in the colonized areas.

Numerous complaints from settlers badly disappointed with the reality and broken promises flowed into the offices in Vienna. There were also unfounded complaints, for instance, over the lack of large tracts of land with castles.

The meticulous bureaucratic strategy for colonization often failed to correspond to the state of things in fact. In other words, the systematic approach to the variety of records and numerous reports reflected a theoretical state of affairs, and those inspectors appointed to serve were not in a position to check for all the transgressions and material losses.

In addition to the many colonists mistreated, the Jews also suffered. They were evicted (mainly for non-payment of taxes) for the purpose of acquiring quarters that were needed for Germans. For instance, a report from February 1784 gives information on the settlement of 83 families of craftsmen in houses formerly belonging to Jews. Another daily report from 1786 gives information on a critical situation that arose one week when hundreds of colonists arrived in one small settlement and the commissar looked for help to the owners of private houses.

As a result, surplus settlers were sent to Hungary and to Bukovina. In addition, larger and larger swarms of so-called wild settlers, with no passports or concrete plans, flowed into Galicia. They had succumbed to rumors of a Galician El Dorado, and their careers usually ended up in seasonal physical labor without any permanent place of residence.

In view of the mounting difficulties resulting from too large an influx of settlers, the Austrian imperial government attempted to settle them on private estates. The first response was so poor that they decided to entice land owners with ad hoc compensation. An offer to pay 50 Rhenish złotys per family awoke no interest, so the stake was raised to 300. This offer, too, proved to be insufficiently attractive, for only a small number of nobles benefited from this sort of contract. Polish land owners were generally not willing to accept German peasants.

Thus, some colonists who came to private estates had, at first, much better conditions; they received larger areas of land, more spacious and solid houses to live in, and farm buildings such as barns, stables, and sheds, with complete farming gear and livestock, usually a pair of horses, cows, hogs, and poultry. In return, the colonists were obligated to pay rent on the land and do compulsory labor service. The land owners, depending on their generosity or greed, either paid a daily rate for the labor or demanded it without pay. They also set additional conditions. For instance, Justyna Rogalińska, the owner of Podhajce, and Jan Zamojski, a magnate in the Zamość area, stipulated that the colonist families had to be of the Catholic faith and had no right to produce and sell liquor.

Formally, the Josephine colonization was terminated by an imperial decree in August 1785; but in practice, this process could not be stopped. Over subsequent years, many German families came on their own initiative; families already settled there, and their descendants, attracted many more of their countrymen.

1 Zamość, along with Zamość powiat, was detached from the territory of Galicia in 1809 and incorporated into the Duchy of Warsaw.

2 We see the term korzec (plural korcy) most often as a unit of measure for dry objects, much like a bushel. But it could be a measure of area, too; footnote 3 clarifies its worth.

3 Austrian korcy and morgi were used. One korzec equaled about .39 hectares, a morga was 1,600 sazni (singular sążert], and one korzec was 1,056 sażni.

4 In the first administrative division for the period 1773-1782, there were six cyrkuły or circles. Each was divided into smaller units, dystryky, or districts. A cyrkuł was the equiva­lent of a voivodeship, and a district equated to a powiat

5 thoughts on “German Colonization in Galicia”