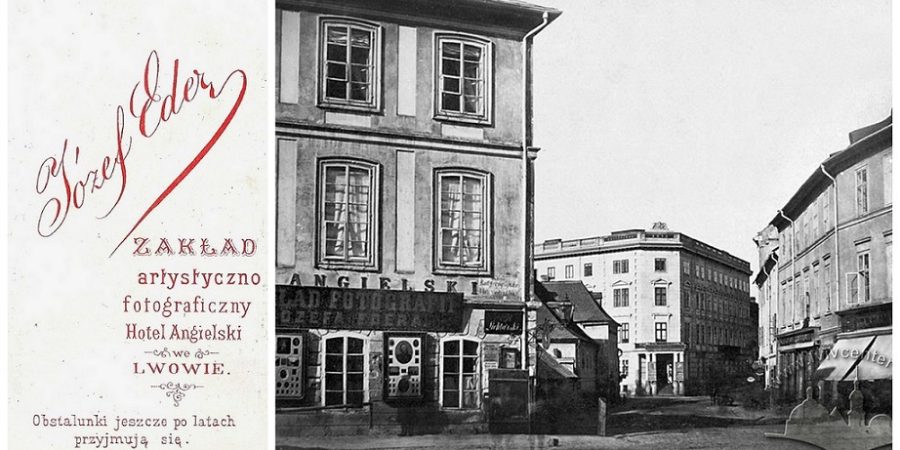 We owe the oldest photographs of Lviv to Józef Eder (1831-1903), the owner of one of the first photography studios in Lviv. His photographs, which have been digitized and today are widely available on the Internet, date to the middle of the nineteenth century.

Starting in 1861, together with Bernhard Brand, Józef Eder owned a studio in Hotel Angielski (English Hotel), which had branches in Jassy (today Iași, Romania) and Stanisławów (today Ivano-Frankivsk). Later he worked only under the name Eder—until 1888, when the hotel was demolished. In that same year, Józef Eder began to operate a studio in Stanisławów, which after his death was run by Teofil Eder (from 1913), and then by Władysław Eder (from 1923).

Józef Eder worked mainly with portraits, but he was also interested in documentary photography (the January Uprising), as well as landscape,
still life, and architectural photography. He photographed Lviv (in 1871 he published “An Album of Curiosities of Lviv”), Przemyśl, and Rzeszów. He created a series of photographs of all the Krakow-Lviv railway stations. In 1877 he took part in the Agricultural and Industrial Exhibition in Lviv and in 1873 in the world exhibition in Vienna, where he received an award.

The nineteenth-century press wrote the following about Józef Eder:

“… enjoyed great popularity and publicity. It was the only studio from which the best photographs were released. All Lviv photographers, including Mr. Trzemeski, were initially educated here.”

A collection of portraits by Józef Eder can be found on the website of Muzeum Fotografii w Krakowie. Below are a few examples.

A selection of Józef Eder’s photographs of Lviv, dating from the 1860s through the 1890s. (Most are from the Center for Urban History’s Urban Image Database)