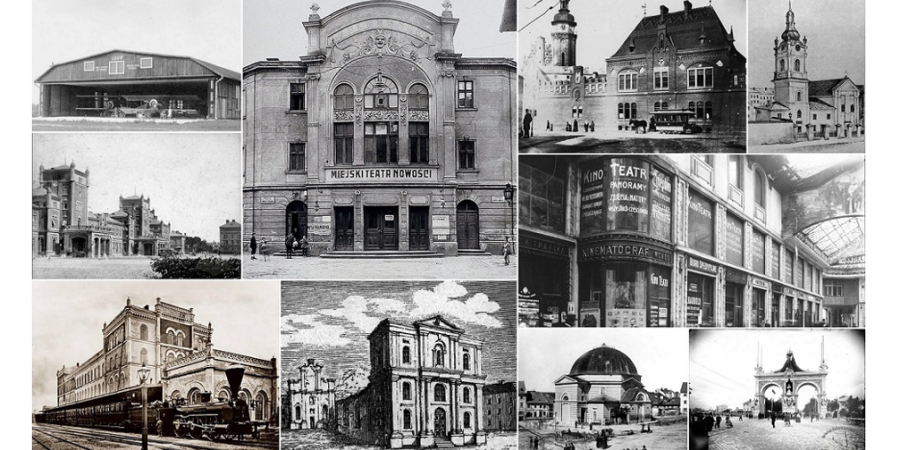 Lviv’s historical urban structures survived WWII largely unscathed, and so much of Lviv’s prewar cityscape is intact. Nonetheless, if we look through old photographs of the city, we come across unfamiliar places. This is not surprising as Lviv, like any city, underwent physical transformations throughout the centuries. In addition to destruction resulting from war, there are many reasons why the urban architecture changes and evolves: fires, new urban planning strategies, modernization, demolition of outdated or weakened structures, and demand for expansion.

Below I’ve created a virtual tour of a Lviv that no longer exists. Though the buildings may no longer exist physically, they survive in stories and photographic documentation. And if we visit these sites today and look close enough, we can often find traces or reminders of these lost places.

Jewish sites, in particular synagogues, were hardest hit during WWII. Before the war, Lviv had more than 40 synagogues. Today, only two remain intact. Of the destroyed synagogues, two of the most known are the ancient Golden Rose Synagogue in the medieval center and the Temple Synagogue on the Old Rynok square, which was opened in 1846, and reconstructed in 1906-07.

“The Lviv progressive synagogue, called Tempel (temple), was the first reformed synagogue in Galicia. It was a monumental building in Neoclassical style, notable for its large dome; unlike European progressive synagogues with their typical oriental and Moorish decorative motifs (Berlin, Vienna or Budapest), it more resembled a Byzantine church,” from Lviv Interactive.

In the last quarter of the nineteenth century, to improve Lviv’s fire safety, the first special buildings for the fire brigade were built in a few locations around the city. The largest, built in 1883-84, was located on Mytna Square near the Bernardine Monastery, and in addition to the sergeant’s and firefighters’ quarters, it had two stables for 14 horses and two warehouses for pumps and other equipment.

In 1899, the city decided to build Lviv’s first centralized fire station. The Neo-Romantic building, officially opened in June 1901, was constructed on Pidvalna Street with barracks for 54 people, horse stables, a barrel cart depot, and apartments for families of officers.

As for the building on Mytna Square, after the firefighters moved out in 1901 the structure remained unused for several years until it was rented out to the military. In the 1930s the building was demolished.

Lviv’s first railway station was built for the expansion of The Galician Railway of Archduke Charles Louis (German: k.k.priv. Galizische Carl Ludwig-Bahn) to connect Lviv to Przemyśl, which in turn connected the Galician capital with Vienna (through Krakow and Brno). The opening of the railway station was on November 4, 1861, on the same day the first train arrived from Przemyśl.

The Lviv railway station was the first on the territory of Ukraine.

When at the turn of the century it became clear that the old station was not able to provide the passenger traffic with high-quality services, it was decided to build a new building. The new railway station, which still adorns Lviv, was built in 1902-1904.

Built: 1866
Destroyed: 1919
Location: In the place of the modern Suburban Railway Station

The railway station successfully survived the First World War, but in 1919, an explosion of ammunition completely destroyed the building and Lviv lost another historic building forever.

See photographs of the Lemberg-Czernowitz from 1868:

Built: 1894
Demolished: likely soon after
Location: near the intersection of Horodotska and Chernivetska Streets

Throughout the centuries, several triumphal arches were erected in Lviv to mark special events and especially the visits of the Austrian monarch Emperor Franz Josef.  The last such arch was built in 1894 to welcome Emperor Franz Josef to Lviv, who came to visit the General Regional Exhibition.  The arch was built across from the railway station, on Horodotska Street near the beginning of Chernivetska Street, in place of the previous arch built in 1880 on the emperor’s last visit.

“This arch was perhaps the largest of all in the history of the city. Like the arch of 1880, it was double arched. In the middle of the arch was a bust of the emperor. Under the bust was the coat of arms of the Austro-Hungarian monarchy, and over the bust the coat of arms of Lviv. Interestingly, the track of the electric tram, which had just been launched, led under the triumphal arch. Although this arch was a massive stone structure, it did not stop it from being merely a temporary construction, which, like its predecessors, disappeared without a trace, captured only in old photographs,” from Photographs of Old Lviv.

The Lviv International Airport in Levandivka was the first airport in Lviv, built around 1914 by the Austro-Hungarian authorities as a military airport. Beginning in 1922 the airport was also used for civilian purposes. In 1929, due to the small size of the airfield, it closed in favor of the new Lviv airport in Skynliv.

The airport was located between the main railway station and Kleparów Station on the territory of the of modern neighborhood of Levandivka.

In the 1930s, a network of future streets was planned for the territory of the former airport. However, the construction of one- and two-story buildings began only in the 1950s.

Today, the only reminders of the former airfield are the names of the nearby streets, such as Povitriana (Air), Pilotiv (Pilots), Propelerna (Propellor), Motorna (Motor), Angarna (Hangar).

The Church of the Holy Spirit

The Church of the Holy Spirit belonged to the Greek Catholic Theological Seminary.

In September 1939, the Church of the Holy Spirit was destroyed by a German bomb. Only its Baroque bell tower (c. 1750s) survived.

The Colosseum Theater was a Jewish community theater in the Herman Passage. The building in which it functioned was erected in 1898-1900 using the metal structure from Jan Matejko’s pavilion from the General Regional Exhibition in 1894. At the end of the exhibition, Abraham and Jakub Herman bought the construction and decided to create an entertainment establishment.

The newly constructed theater house was built in Secession style, but the features of this style were vibrantly manifested only in the avant-corps of the building, such as a mascaron decorated with wavy and flowing lines, cornucopias, and numerous floral motifs.

The theater was located in a building enclosed between adjacent buildings and from the main street was barely visible. Nevertheless, this theater was the second most popular and active in Lviv, after the Skarbek theater. The seating hall could accommodate up to 1,054 people.

Since 1908, in addition to theatrical performances, film screenings were also held in the theater. The cinema divided time with the theater, so the hall was used almost around the clock.

In 1917-1927 the Miejski Teatr Nowości (Nowosci City Theater) operated in the Colosseum building. In 1920 there were free film screenings for Polish soldiers who participated in the Soviet-Polish war.  In 1928, the Colosseum cinema restored its activity. In 1939-1941, the State Polish Theater operated in this building.

The Colosseum building was destroyed during the Second World War.

Mikolasch Passage was a glass-covered shopping arcade, which housed two cinemas, restaurants, cafes, and shops. The passage was built between 1898 and 1900 by Ivan Levynskyi’s firm and was one of the first Secession structures in Lviv. Wall frescoes, electric lighting, central heating, and a magnificent fountain created a charming and comfortable atmosphere. One entrance was from Kopernyka Street, through the entrance of Piotr Mikolasch’s famous pharmacy.

The passage was destroyed by bombing in June 1941. A few ruins remain in the courtyard of building 1 Kopernyka Street.

The Church of the Holy Trinity and the Trinitarian Monastery

Built: 1703-1731
Destroyed: 1848
Location: Krakivska and Teatralna Streets (today, the Narodnyi Dim and Church of the Transfiguration)

The Church of the Holy Trinity and the Trinitarian monastery was a complex of sacred buildings located in the center of Lviv, between the present streets of Krakivska and Teatralna.

After Galicia became part of the Hapsburg Empire in 1772 and the activities of Catholic monastic orders were abolished, the Lviv University received the buildings of the monastery and church. In 1784 the university established a library and assembly hall in the church.

During the bombardment of Lviv in 1848, a fire destroyed the university buildings. The library suffered particular losses: from about 50,000 volumes only about 13,000 were saved, and many manuscripts were lost.

In 1849, the ruins of the monastery were given to the Ukrainians of Galicia, who between 1851-1862 built the Narodnyi Dim (People’s House). During construction, part of the old foundation was used—this accounts for the curvature of the facade on the side of Teatralna Street.

Later, between 1878-1898 the Greek Catholic Church of the Transfiguration was built on the ruins of the old church.