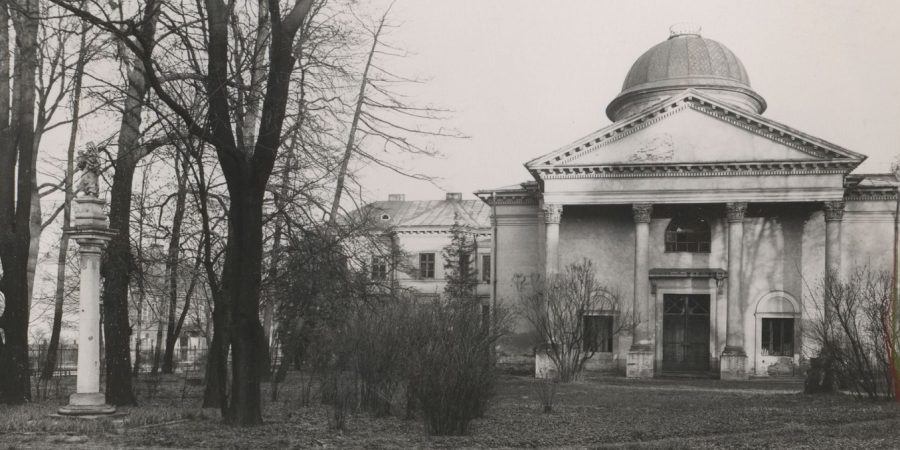 The cultural destruction wrought upon Eastern Europe by war and revolution is not well publicized in the west. Hundreds of thousands of books, manuscripts, maps and artifacts have been stolen or destroyed as a direct result of conflict. Consider for instance, the successive Soviet, Nazi and Soviet occupations of Lviv during World War II. While the human destruction has been largely documented, the loss of cultural wares and institutions has been almost forgotten. In the aftermath of World War II, the city’s Polish culture, like its majority ethnic Polish population, was uprooted.

Much was lost in the upheaval, but fortunately some parts of the Polish intellectual legacy were so important and prominent that they managed to be at least partially saved. Chief among these was the renowned Ossolineum (National Ossoliński Institute), an intellectual powerhouse of Polish literature and learning.

The Immense Legacy of What Was Almost Lost

Prior to World War II, the Ossolineum held hundreds of thousands of books, manuscripts, autographs and maps, many of which were the rarest of their kind. The material losses of the Ossolineum in Lwów can be somewhat quantified, but the intellectual loss was incalculable. The library survived in another form, in another city, in a new part of Poland. Today it is a storehouse of Polish culture in Wrocław (formerly Breslau, Germany). Meanwhile a new institution was created in the exact same place where the Ossolineum once stood, the Lviv National Vasyl Stefanyk Scientific Library of Ukraine. The library, like the city, became Ukrainian focused. Nevertheless, it is something of a miracle that both Ukrainian and Polish intellectual traditions still survive at these institutions today. This would not have been possible without the immense legacy of the original Ossolineum and the strong vision of its founder, Józef Ossoliński, a man who had also lived through geopolitical changes which his love of learning had managed to transcend.

Józef Maksymilian Ossoliński was the scion of Polish nobility. The Ossoliński family’s aristocratic roots stretched all the way back to the earliest days of the Polish Kingdom. Over the centuries they acquired estates across the eastern parts of the kingdom. One of these, Krzyżtopór, was home to the largest castle in Europe before the construction of Versailles. The family’s wealth and splendor was threatened by the late eighteenth century in one of the most turbulent periods in Polish history as the Polish-Lithuanian Commonwealth disappeared during three partitions. The Ossoliński family estates were now in lands ruled by the Austrian and Russian Empires. It was during these times that Józef Ossoliński came of age. Because of his homeland’s geopolitical situation Ossoliński developed hybrid loyalties, straddling the lines between Polish nationalism and adherence to Austrian rule.

A Gift Of Knowledge – Creating the Ossolineum

At the time when the Commonwealth suffered through its third and final partition in 1795, Ossoliński was living in Vienna where he was head of the Austrian Imperial Library. He was known to be a voracious reader and researcher with a love for learning that has rarely been surpassed in Polish history. Ossoliński was able to use his cleverness to great personal advantage, co-opting Austrian policies to expand his own personal library holdings. When Emperor Joseph II dissolved the monasteries, Ossoliński took the opportunity to expand his holdings through acquisition of many rare books and manuscripts. In his later years, he decided to transform his personal library into an institution to promote Polish literature, learning and history.

Ossoliński had earlier been involved in the reestablishment of the University of Lwów in Austrian-ruled Galicia. This helped lead him to a decision years later that the city would become home to the Ossoliński National Institution (Ossolineum). To house the institution he acquired another asset from a shuttered monastery, an abandoned convent building. Within these walls, where spiritual enlightenment had once taken place, the enlightenment of intellect would now take precedence. Sadly Ossoliński did not live to see this happen. As a matter of fact, during the last years of his life he could not see at all. Ossoliński had lost his vision, but his love of learning was so great that he employed Polish students to read aloud to him. Ironically, this took place far from Lwów and Poland—Ossoliński lived out his finals days in Vienna where he died in 1826. The Ossolineum opened the next year.

From Polish Intellectual Resistance to Renaissance

At the time of its founding, the Ossolineum was an island of Polish culture beset by sweeping tides of Germanism. The Austrian authorities had imposed the German language on Polish Lwów. The city’s was given a German name, Lemberg. The language on public signage was changed from Polish to German. The professional classes were completely dominated by Germans. The Poles were reduced to second class status in a city where they held a majority. The Ossolineum acted as a bulwark of Polish intellectual resistance. This alarmed Austrian authorities to the point that they took harsh measures against the Ossolineum during its early years. A director and his closest associates were imprisoned for treasonous activities. At times the entire facility was shut down and catalogs of its holdings taken away. During the Revolution of 1848, an Austrian general openly regretted that the building had not been subjected to artillery fire.

It was only in the late 1860s, following the Austrian loss in the Austro-Prussian War and the Habsburgs historic compromise with Hungary, that Polish culture was finally given room to blossom in Galicia. The Ossolineum was in the vanguard of this Polish intellectual renaissance. Illustrious Polish aristocratic families, such as the Lubomirski’s, bequeathed their entire personal museum collections to the institution. A famous publishing house developed, known as the Ossolineum Press. World War I delayed progress, but this turned out to be only a temporary setback. During the interwar period, the Ossolineum’s holdings expanded to over 220,000 works with everything from rare tapestries to coins to the largest newspaper collection in Poland. It was an incredible accomplishment of Polish intellectual achievement, but then the World War II began and everything changed.

Worst Was Yet to Come – The Ossolineum on the Brink

In 1928 an article entitled “The Centenary of a Great Home of Research in Poland, The Ossolineum, 1828 – 1928” in The Slavonic Review by Roman Dybosko stated, “the Ossolineum, now entering, in a free and reunited Poland, on the second century of its existence, we behold – and I think must admire – a house which has outlasted the earthquakes of a tragic national history, and proudly stands as a monument to the power of self-sacrifice and endurance, in the service of high ideals of culture and progress.” The author wrote this a little too soon because the worst earthquakes, from both east and west, were yet to come.