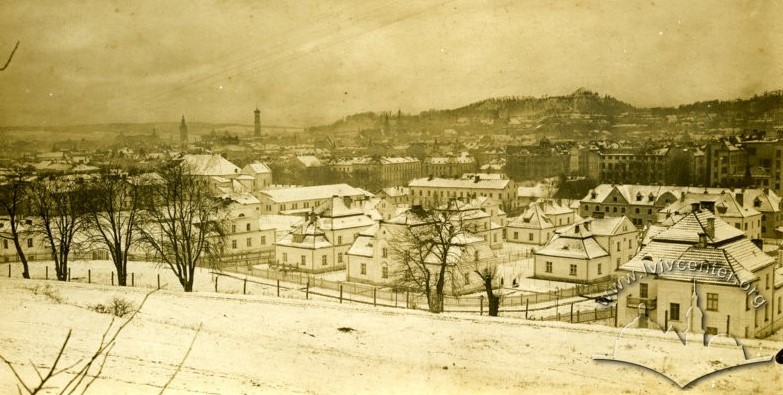 After overcoming World War I and the financial crisis, housing developments (often called “colonies”) started to be built in Lviv for private and professional organizations. Many were inspired by Ebenezer Howard’s concept of a garden city. One such project was the residential quarter built for Polish military officers and their families — the Officer’s Colony.

The Architecture of the Houses

The Officers’ Colony (Kolonja oficerska) was a cooperative housing development project built between 1923 and 1931. The complex comprised of two-storied stone houses designed in styl dworkowy, an architectural style that resembled Polish manor houses of the seventeenth century. The houses had high, two-level hipped roofs (also known as Polish roofs), with soft gable lines that often terminated in volutes, oval gable windows, and column porticos at times reduced to pilasters. The designers of the houses were architects Tadeusz Wróbel, Władysław Limbergen, Witołd Jakimowski, and Roman Voelpel.

As for the interior, on the first floor of each residence was a large kitchen with a pantry, a service room (for a servant), two or three rooms, a bathroom and a toilet; on the second floor, two rooms, sometimes a second toilet. Each building also had a basement.

The Layout of the Colony

The layout of the project was inspired by Ebenezer Howard’s concept of a garden city as proposed by Lviv Polytechnic professor and urban planner Ignacy Drexler. This means that the houses were located within individual gardens and the streets were planted with fruit trees “adapted for the width of the streets and the facades of the houses.” These were cherry trees, shrubs, and hybrids with large sweet fruits.

The two main streets of the colony were appropriately named Czereśniowa, which means “Cherry” (today Chereshneva), and Oficerska, which means “Officers'” (today Samiylenka).

The colony was designated above all for Polish military officers and their families; this included active duty officers, military veterans, as well as pensioners and intelligentsia.

The Officers’ Colony was not unique to Lviv — similar housing developments for military officers appeared in cities across interwar Poland such as Warsaw, Krakow, Jarosław, Przemyśl, Grodno (now Belarus), Lutsk (now Ukraine but north of Galicia). Some were also built in Polish manor style, others in Modernism.

After WWI, the question of housing for serving and retired Polish military officers in interwar Poland was an important one, especially in the eastern areas, which were formerly under the Austrian and Russian Empires. Ignacy Drexler writes in 1921 in his book Rebuilding Villages and Cities in Our Land: “Now on the eastern boundary of the Commonwealth begins the settlement of the Polish population, first of all our soldiers. It is necessary with the greatest possible care to select the places for new housing developments. After all, the walls of the homeland will be built here for the ages.”

In Lviv the Officers’ Colony was most likely built by the Committee for the Development of the City, who then sold the houses on favorable terms. The committee would have also partly financed the development.

Moreover, in 1927 the Military Housing Department Fund cooperative was established to construct future housing for military personnel and to manage already existing housing.

WWII and a New Set of Officers

With the start of WWII in 1939, many of the officers for whom the houses were built were mobilized and were killed or captured. The following year retired officers and their families as well as the families of active duty officers were deported deep into the Soviet Union. And finally, when Lviv fell under the Soviet Union after the war, all remaining Poles were forced to repatriate.

Under Soviet rule, the houses of the colony became state property and the vacant homes were occupied by new residents — also high-ranking military officers, but now Soviet.

Consequently, as E.-J. Sadowska points out in Kooperatyvna oficerska koloniya u Lvovi, the cultural capital of the residents of the Officers’ Colony in Lviv did not remain in the group for which the houses were designed and who took part in its creation, and it was not transferred to the next generation.

Taking the above into consideration, it is no wonder that after the war the cultural community and territorial integrity of the neighborhood was lost. In the decade that followed, the houses underwent major alterations: the top levels were raised, the appearance of the roofs changed and the original shingles were lost; additions were built, each half of the paired houses were altered differently, balconies of different shapes were added; plastic windows replaced the original wooden ones, while entrance doors changed and were often “improved” with plastic awnings; the majority of the original gates and fencing were replaced with tall massive ones; the facades were re-plastered and the original color scheme of the facades was lost (from Kooperatyvna oficerska koloniya u Lvovi). On top of it all, satellite dishes and air conditioners were fixed to the facades.

And it’s not only the original architecture that was altered, but the garden landscape as well: silver and Caucasian spruces and thujas replaced the low-lying street plants and flower beds and most of the clipped hedges have been lost. Now many of the the facades are covered by tree crowns.

Despite the above-mentioned alterations, some original details can still be found on the houses, in particular the shapes of the gables along with the volutes. In a few buildings the original shingles, dormer windows, and oval windows remain.

Although the current trees and plants don’t correspond to the original plan, the lush greenery that encompasses the houses does still create the atmosphere of a small-scale garden city.