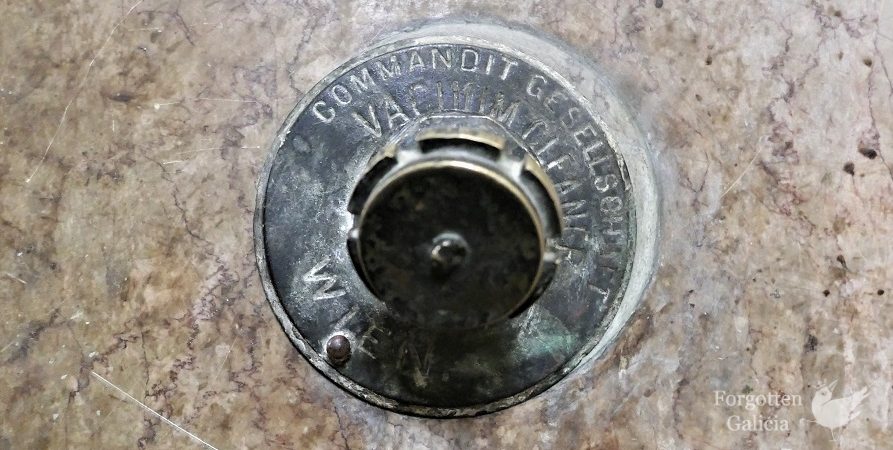 A rather unique and rare remnant of the past found in Lviv is the antique central vacuum inlet — one small part of a central vacuum cleaner system that was installed in buildings still before WWI.

A central vacuum cleaner works by sucking dirt particles through tubes in the walls into a collection container. The power unit is a permanent fixture typically located in the basement along with the collection container. Inlets are installed in walls throughout the building to which hoses can be attached to then remove dust, particles, and small debris from interior rooms and stairwells.

Unfortunately, I haven’t found much information about the exact technology used in Lviv before the war, such as what sort of power unit was used. However, I did find an American example of a central vacuum from the same era: the Arco Wand, one of the very earliest residential central vacuums, made from about 1910 into the 1920s.

As for how it looked on the other end, we can get some idea from these photographs taken in the 1910s of Enoch J. Fargo, an American who invented a central vacuum cleaner. On the left he is “getting his suit cleaned” by a servant.

I don’t know how many buildings in Lviv would have been equipped with this cleaning appliance, but I’ve come across traces of such systems in just two buildings in the city center. Both are rather large, upscale buildings, which is not surprising as central vacuum systems were still quite a new invention at the time.

Considering that in the early twentieth century it was common for stairwells to be carpeted, this built-in system would have surely come in handy.

This inlet can be found on the first floor of a stairwell of a residential building built in 1909. From the inscription “Commandit Gesellschaft Vacuum Cleaner Wien” we know it was manufactured in Vienna.

Interestingly, the inscription is in both German and English. The part “vacuum cleaner” is in English, which is probably because the first powered vacuum cleaners that used suction were invented by English speakers: British engineer Hubert Cecil Booth and American inventor David T. Kenney. The two men invented this appliance independently of one another in 1901. But it is believed that Booth was the one who came up with the world “vacuum cleaner.” This was only a few years before Commandit produced hardware for central vacuum cleaners and so for lack of a standard German translation, the English name was used.

This Secession-ornamented valve can be found in a stairwell of a building from 1911-1913. The Polish inscription reads “Odpylacz – Austr. Tow. Akc. Budowy Maszyn Körting,” which tells us that the “odpylacz” (dust collector) was made by the Körting Austrian Stock Company for the Construction of Machines — a proxy of the Körting Brothers Company founded in Hanover in 1871.

I do wish these days buildings in Lviv still had such cleaning systems because Lviv is an extremely dusty and sandy city — just as I imagine it was back then.