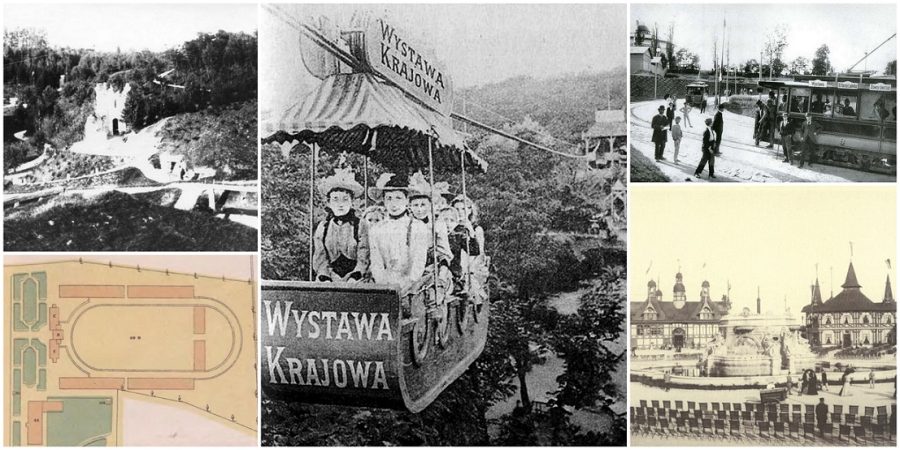 The biggest fair in the history of Lviv (Lwów), the General Regional Exhibition (Powszechna Wystawa Krajowa) drew nearly 1,150,000 visitors over a four-month period. The most distinguished guest was Austrian Emperor Franz Josef I himself.

The exhibition was a platform to demonstrate Lviv’s and Galicia’s economic and cultural progress, and at the same time it was a catalyst for modernizing the city and undertaking important infrastructure projects.

Here’s are five fun facts about the exhibition.

1. The Fair Brought the Electric Tram to Lviv

To help guests conveniently reach the site of the exhibition, an electric tramline a few kilometers long was built. The tram connected the main train station to the city center and on to Stryiskyi Park (Park Stryjski / Park Kilińskiego) where the exhibition was held.

The tramline was built and run by Siemens & Halske, who also constructed Lviv’s first municipal electric station to power the line.

The tram began operating on May 31, 1894 — just in time for the opening of the exhibition, which was held on June 5.

The electric tram was the second on the territory of modern Ukraine and the fourth in the Austro-Hungarian Empire.

The municipality bought the tramline and the power plant in 1896. The electric tram became an integral part of the city and to this very day is a popular means of transport in Lviv.

2. Visitors Traversed the Site on a 170-Meter Aerial Tram

While an electric tram was launched to bring visitors to the exhibition, on the territory itself a 170-meter aerial tram (cable car) was installed to help visitors move about the exhibition site. This aerial lift connected the main pedestrian thoroughfare on the upper terrace of the exhibition with the ethnographic section.

The tram was built by a gas engine factory in Dresden. Powered by a gas motor, two 8-passenger carriages moved on steel cables at a speed of 1.3 m/sec. The cableway crossed a 30-meter deep ravine over lush greenery. The trip itself lasted just over two minutes.

The aerial tram operated from July 2 to October 15, 1894. It was dismantled shortly after the end of the exhibition.

The exhibition’s aerial tram was the first in Lviv and is considered the first on the former territory of Poland.

3. The Fair Featured a State of the Art Electric Light and Musical Fountain

A unique electric light and musical fountain was installed in the center of the exhibition’s main square. It consisted of 11 groups of tubes and was illuminated with colored lamps. To the beat of music water jets rose to different heights. The square itself was lit by 102 lamps and 1,500 light bulbs. The spectacle was turned on at 9 in the evenings.

The fountain was designed by Czech inventor and engineer František Křižík and the construction was led by Robert Gabel. The sculptures were created by Leonard Marconi.

The fountain was dismantled in 1906. In its place is the Ivasyk-Telesyk Fountain built in 1964. In 2011 it was renovated and, continuing the tradition of the fair’s fountain, in the evenings it puts on a musical and light show.

One of the attractions on the territory of the exhibition was artificial castle ruins. Ancient tombstones of the old Stryi Cemetery as well as stones from an old bridge were used in the construction. Fake ruins such as these were once fashionable across Europe. Well over 100 years old, these ruins still remain today and can be found on the territory of Stryiskyi Park.

5. The fair was the official birthplace of soccer for both Poland and Ukraine

The historic match was between members of the Polish Sokół clubs of Lviv and Krakow. The game lasted just six minutes until Lviv’s Włodzimierz Chomicki scored the first goal.

The crowd perceived the game simply as a curiosity — little would they know how popular this sport would become. To this day soccer is beloved in both countries.

The match was held in Stryiskyi Park in a newly built British-style soccer stadium with tribunes for 7,000 spectators — the first stadium in Lviv. Like most of the fair’s structures, it was dismantled after the end of the exhibition.

On the 110th anniversary of the event, a monument was erected in the place of the former stadium with an inscription that reads “Lviv – the birthplace of Ukrainian Soccer.”