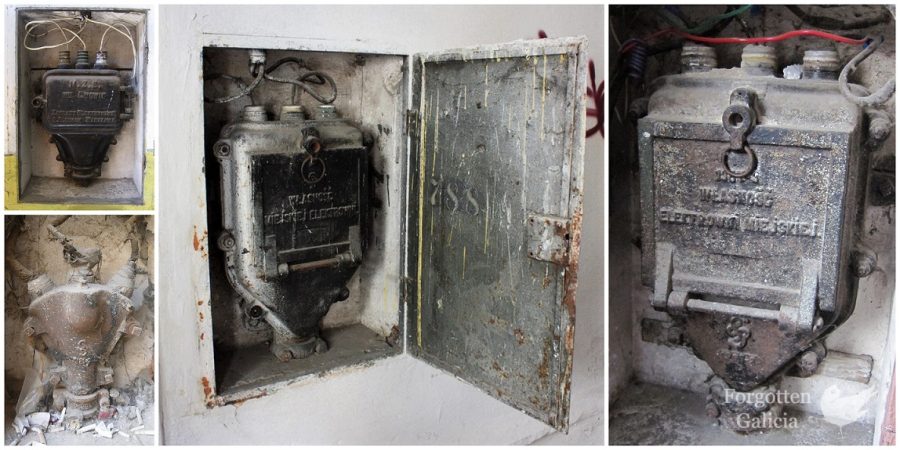 Dozens of prewar electrical panels can be found inside the entryways of many of Lviv’s old buildings. Although more than one hundred years have passed since they were installed, these devices continue to supply power. Here’s a look at how electricity first came to Lviv’s residential buildings and the role of the electrical panels.

In 1900, a large electricity distribution point was created in the basement of the Opera House, which brought light to the theater, the streets of the city center, and new consumers. The same year the city founded the Miejskie Zakłady Elektryczne – MZE (Municipal Electric Authority), the enterprise which was to be responsible for the maintenance of the electric station and power grid of the city.

Between 1900-1914 to supply electricity to buildings and to light the streets, close to 150 km of DC power cables manufactured by Siemens & Halske were installed underground in Lviv’s center. The cable network was then connected to electrical panels inside buildings. At the peak of the development of the DC power grid there were 573 cable inputs in multistory residential buildings.1

Widespread electrification of the city, however, was made possible only after the construction of an electric power station of alternating current (AC), which opened in 1909. From this new station, electricity was channelled to three central distribution points, to which 72 electrical substations were connected. From the substations electricity was supplied to consumers via electrical panels, which, along with 170 km of cables, were installed by Zygmunt Rodakowski’s firm together with Siemens-Schuckert.2

These cast iron electrical panels were mounted in the vestibules of residential buildings, typically on the left-hand side in a niche in the wall. Advanced constructions for the time, the panels distributed the electrical power feed into subsidiary circuits and also provided a protective fuse. Fixed control fuse holders were mounted on a marble slab and inserts were placed on the movable cover of the panel. Opening the device automatically switched off power to the building.3

Many examples of these original electrical panels can still be found around Lviv. As Siemens not only constructed the first power station and installed cables and electrical panels, but also manufactured many of the electrical appliances, including the panels, it is no surprise to see the Siemens-Schuckert and Siemens & Halske logos embossed on them.

In addition to the Siemens logo, the panels have a Polish inscription, which translates as Property of the Municipal Electrical Station (there are two variations of the wording).

In the interwar period, the network continued to expand and the number of new consumers grew year by year. The output power of the electric station increased, and three new central distribution points were created.

Original electrical panels from this period can also be found around Lviv — though less frequently than the ones above. These were property of the M.Z.E. in Lviv and manufactured by S. Kleiman in Warsaw.