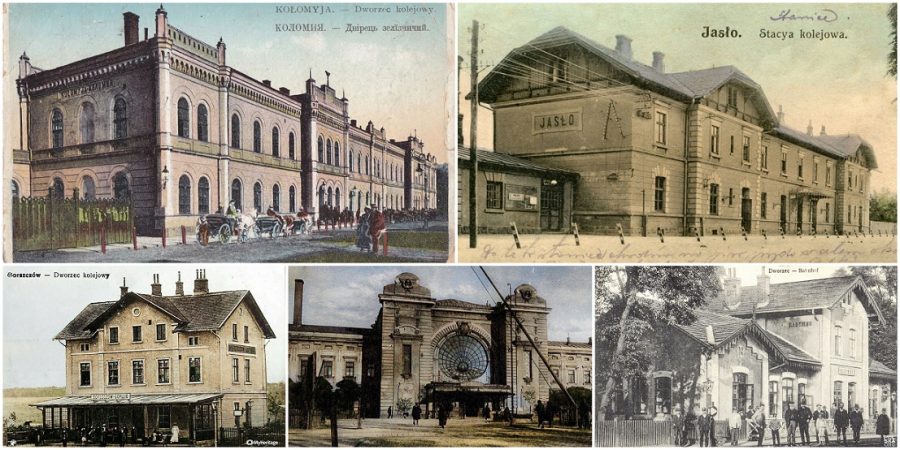 A look at some of the different architectural styles used for passenger railway station buildings across Galicia, from the time of the first railway line (1856-1861) to World War I (1914).

The station building employed the Romano-Gothic Revival style. It consisted of four four-story sections, reminiscent of medieval towers, that were united by two-story structures. Some of the features included Lombard bands, string courses, blind arches, turrets, porte-cocheres, and windows with hooded crowns.

The small connections on this line between Przeworsk and Lviv — in particular Radymno (now in Poland) as well as Mostyska, Sudova Vyshnia, and Mshana (all three now in Ukraine) — were much smaller stations than the one in Lviv, but were designed in a similar, albeit much simplified style. These buildings had decorative molding under the eaves (reminiscent of stepped gables) and segmental arched hood moldings over the windows. Judging from the early-twentieth-century photograph of the station in Radymno, these smaller stations had bargeboards (ornately carved trim attached along the roof line of a gable) — a typical feature of Gothic Revival architecture of that era.

The railway station in Radymno, built 1860, was recently renovated. The architectural details on the facades were restored, and the original color was returned.

In 1866, a new railway, the Lviv-Chernivtsi Line (Lemberg-Czernowitz-Jassy-Eisenbahn), was opened. The line connected the capitals of Galicia and Bukovina, passing through the cities of Ivano-Frankivsk (Stanisławów) and Kolomyia (Kolomyja), as well as a number of smaller towns and villages.

To service the new line, a separate railway station was built in Lviv — the Chernivetskyi Station. This station, as well as the other stations built along the line, employed the style of Rundbogenstil, or round-arched style — a nineteenth-century historic revival style of architecture popular in the German-speaking lands. It combined elements of Byzantine, Romanesque, and Renaissance architecture with particular stylistic motifs. Rundbogenstil was used for a number of railway stations in Germany — the so-called first-generation stations (built between 1835 and 1870).

The main features of Rundbogenstil are arched windows (sometimes with tracery), patterned masonry arches or hooded crowns over the windows, corbelled cornices (themselves reminiscent of Lombard bands), parapets with blind arches, narrow turrets, rustication on the first level, shallow gables, and recessed windows and portals.

Not many of the original stations remain; here are a few:

A few different styles were employed for the stations that serviced these lines; however, some similarities can be found among them, especially between ones on the same lines.

For example, the stations in Sambir (Sambor) and Drohobych (Drohobycz) are very similar: elongated structures with a one-story section flanked by multi-story annexes, gables with triple windows, and decorative timber trusses.

Of the stations from this decade, the Doboromyl station, built for the Hungarian-Galician Railway, has remained largely unaltered until today.

The station in Khyriv (Chyrów), built for the Dnister Line, stands out due to its elaborate ornamentation. The stations in Morshyn (Morszyn), Bolekhiv (Bolechów), and Kalush (Kalusz), all built in 1875 for the Albrecht Railway, have inverted crenellation ornamentation under the eaves of the structure and oculus windows. They are somewhat similar to the one in Khyriv, but much more reserved.

The Khyriv station has survived in relatively good shape until today. The original Bolekhiv building also still stands but the facade has been altered.

The Galician Transversal Railway, built in the years 1882–1884, was constructed in order to connect already existing lines (including the Dnister Railway (1872); the Prince Albrecht (1873); and part of the Hungarian-Galician Railway) into a continuous east-west route parallel to the main Galician Railway of Archduke Charles Louis route Kraków-Lviv.

Its construction was mainly for a military purpose — to build an alternative line to the main Kraków-Lviv Galician Railway in the event of a war with Russia. But it was also supposed to activate underdeveloped mountainous areas of Galicia.

Since several connections already existed, passenger buildings had to be built only for the new stops. All of the new structures, built in 1884, employed the same style — one based on Austrian Tyrolean patterns, transformed for the needs of the local town.

After the completion of the Galician Transversal Railway in 1884, a period of regional railway construction began. Lines of this type were short sections serving local centers that had been excluded from the existing main lines.

In Ukrainian sources, the style is called “rustic-roof” (рустиково-стріховий), while in Polish sources I’ve seen it referred to as the “traditional Galician style of railroad architecture” (styl galicyjskiej architektury kolejowej).

The main features are cross-gabled jerkinhead (half-hip) roofs, quoins (masonry blocks at the corner of the walls), stone voussoirs above the first-level windows and doors, rustication, especially on the basement and first-level, and wooden cladding at the attic level.

While the style was the same for all, for larger towns, elongated versions of the same plan were used, as can be seen in places like Rzeszów Staroniwa and Jasło. On the side of the tracks of the larger versions, between the two side annexes, was a covered platform, the projecting roof supported by six cast-iron columns. It is known that the columns in Rzeszów Staroniwa station were serially cast in the Kraków Zieleniewski factory. Most likely this factory also supplied the columns for other stations built in this style.

Here are some of the stations today. Several of the ones in Poland, as well as a couple in Ukraine, have been renovated in recent years. The original color scheme has been returned to some of them — yellow facades with white quoins and red tile roofs.

In the 1890s provincial lines were built on both ends of Galicia. These were short sections serving local centers that had been omitted by the existing main lines as well as connections to tourist centers in the Carpathians – such as Zakopane (1899).

The style used for these small station buildings can be found not only in Galicia but in other parts of the Austrian empire, especially in Czechia. A similar building style can even be found in provincial regions of France.

Examples of these buildings today:

These are two-story Dutch gable roofed buildings with one or two front-facing gabled dormers. Another main feature is quoins.

How the buildings look today:

The local Lviv-Pidhaytsi Line (Localbahn Lemberg-Podhajce) was completed in 1909 and connected Lviv via the Lychakiv Station (built 1906) to a series of towns and villages south-east of the city, including Vynnyky (Winniki), Peremyshliany (Przemyślany), Berezhany (Brzeżany), and Potutory. This line was mostly used by Lvivians to escape the city on weekends and in the summer.

Some of the connections already had passenger buildings, such as Berezhany and Potutory (both built in 1897), but other buildings along this line were built in a similar style, which returned some of the features of the railway buildings of the 1860s and 1870s, in particular the decoration along the rooflines (inverted crenellations), corner pilasters, and window crowns.

By the end of the nineteenth century, the main Galician cities needed larger and representative railway stations that would meet the cities’ new needs. Thus over the next decade, many of these stations were either renovated or rebuilt in new styles.

For example, in 1895 the Przemyśl railway station (built 1859-1860), was renovated in neo-Baroque style. In 1899-1904, Lviv’s first railway station (1861) was rebuilt in Secession style with elements of neo-Renaissance. In 1903-1906, Ivano-Frankivsk’s station was rebuilt in neo-Renaissance style, and in the same years a new station was built in Ternopil in neo-Baroque and Secession styles.