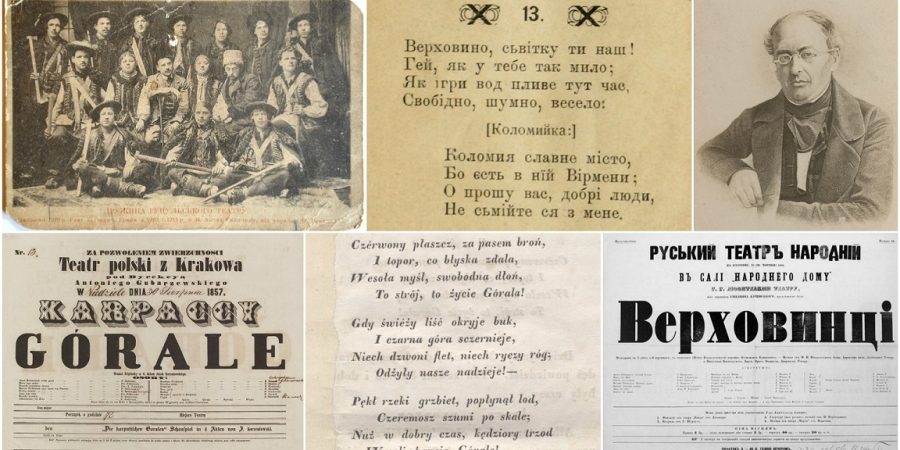 Today, both the Poles and Ukrainians have a beloved song about the Hutsul Carpathian highlanders, sung in their own languages to a similar melody. How did this come to be?

We must first look back at the first half of the nineteenth century. This is when the Polish elite in Galicia become fascinated with the Hutsul region and its culture — inspiring many writers, artists, and musicians. Among them is playwright and comedy writer, Brody native, Józef Korzeniowski (1797–1863), who in 1843 published a Hutsul drama called Karpaccy Górale (Carpathian Highlanders).

The play, completed in 1840, was written while Korzeniowski was in Kharkiv after the author’s visit to the Carpathian Mountains and was allegedly inspired by a real event — the murder of the rifleman Prokop by a young Hutsul named Antoś in an act of retaliation.

Karpaccy Górale was first performed on stage on June 2, 1844, in Lviv. Subsequently, it was performed all across Galicia.

The first staging of the play became one of the greatest cultural events of the era. Although there were some negative reviews, the common opinion was positive and it found its way into the history of Polish literature.

A film was even made on its basis back in 1915, but it did not survive.

The most famous part of the play is the song “Czerwony płaszcz” (Red Coat), which later became known as “Czerwony pas” (Red Belt). The music was composed by Karol Kurpiński.

Karpaccy Górale practically begins with the song: In the tavern in Żabie (today Verkhovyna), an old Hutsul Maxym Tychończyk sings to the young Hutsuls this popular aria.

The song itself depicts the carefree life of the Hutsul, with his red cape, firearms, and shiny hatchet, free and happy in the mountains.

The chorus of the song, a kolomyjka, was added later by an unknown author.

This song became part of the Polish national ideology and survived as an independent piece of poetry and music. It did not share the fate of Karpaccy Górale, which became a thing of the past. Instead, “Czerwony pas” continues to be sung by new generations of Poles, most of whom have no idea the words were written almost 200 years ago or that it was a Hutsul hymn — a manifesto of freedom.

Karpaccy górale underwent several translations and adaptations into Ukrainian. The first was by Mykola Ustyianovych (1811-1885), who in 1848 published a Ruthenian version Verkhovyntsi Beskydiv (The Highlanders of the Beskyds), which included the song “Verkhovynets,” (later known as “Verkhovyno, svitku ty nash”), his loose translation of “Czerwony Pas.”

Verkhovyntsi Beskydiv, like the Polish drama, was staged across theaters in Galicia. The musical numbers for the play at that time were written by Ukrainian composer Mykhailo Verbytsky.

When the first Ukrainian professional theater — the Ruthenian Besida Theater — was formed in 1864 in Lviv, they also wanted to stage the play, but went with Ksenofont Klymkovych’s newer translation, with music by I. Novakovskyi. Titled Verkhovyntsi, Klymkovych’s version was published in Lviv in 1864 as part of the Ruthenian Reading Room 7th series.

Verkhovyntsi, which premiered on May 29, 1864, in Lviv, was generally liked by both the public and critics.

It can be assumed that Ustiyanovych’s version of the song “Verkhovyno” was used in this staging of the play.

Korzeniowski’s drama received a new successful and long-lasting life among the Ukrainian Hutsuls at the beginning of the twentieth century thanks to the efforts of Ukrainian composer and bandura player, theatrical figure and director Hnat Khotkevych (1877-1938).

In the Carpathian village of Krasnoyillia (Krasnoiła), Khotkevych organized a Hutsul Theater. In 1910, he translated Karpaccy Górale play into the Hutsul dialect, naming it Antin Revizorchuk, and it became the first production of this theater — and it remains in its repertoire to this day.

After the first successful performance, the theater troupe went on tour for 90 days, giving 68 performances in 61 cities, including in Zabye, Stryi, Krakow, Lviv, and Brody.

According to the head of the Hutsul Theater Volodymyr Sinitovych (as of 2010), throughout the years, the play Verkhovyntsi underwent inevitable changes. In the version performed by the theater, Maxym sings not “Czerwony pas” but a different song — “Chorhohora khlib ne rodyt’, ne rodyt’ pshenytsiu.” According to Sinitovych, this song has been included in the play since the time of Khotkevych. Ustiyanovych’s refrain is present in the play, but only in its musical arrangement, which was composed by Mykola Lysenko. Maxym communicates with Antin through the Ukrainian melody of “Verkhovyno,” the sound of which reminds the recruit about home.

A version of Karpaccy Górale was even staged in the diaspora. One of the most successful and best-documented early amateur theater groups in Winnipeg’s Ukrainian community, the Taras Shevchenko Educational Society drama circle, which flourished in 1906-07, staged Verkhovyntsi as their first play in November 1906 in front of a packed hall.

The song “Verkhovynets” brought Mykola Ustyianovych great popularity. This was greatly facilitated by Ukrainian composer Mykola Lysenko, who, having heard this song in the Carpathians, arranged one of the melodies to it. Today, several variants of “Verkhovynets” are popular among Ukrainians.

The lyrics were included in Yakiv Orenshtain’s songbook Halytski Ukrayinski Narodni Pisni (Galician Ukrainian Folk Songs) published in 1900 in Kolomyia. It includes the 9 original verses (using a slightly different order and a few small lyrical changes) with a kolomyjka after each verse. (Just as with the Polish version, kolomyjka refrains were added later to the original song as part of its folk song development.)

Gradually the song dropped from 9 verses to the 2-3, which are commonly sung today.

The popularity of the song in recent times can also be attributed to American singer of Ukrainian origin Kvitka Tsisyk. The song was included in her very popular album “Songs of Ukraine” (1980), which contributed to the revival of Ukrainian culture and national self-identification of Ukraine in the 1990s, and which is a beloved album of the Ukrainian diaspora. In fact, many groups in the diaspora include this song in their repertoire.

We can assume that due to the popularity of the play Karpaccy Górale as well as its Ukrainian versions, the “folk” songs “Czerwony pas” and “Verkhovуno, svitku ty nash” spread among Poles and Ukrainians, respectively. And while today the play and origin may have been forgotten, the song is still a favorite of both nations and lives on.