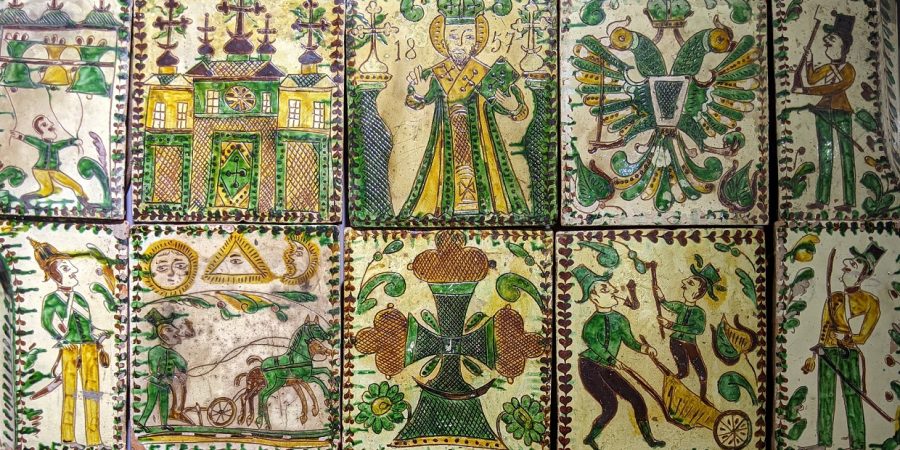 By Oleksandr Simchuk for Amnesia

Master tilemaker Oleksa Bakhmatiuk (1820-1882) is the most famous representative of the Kosiv school of ceramics and perhaps the most successful Ukrainian artist of the nineteenth century.

A lion playing with a wheel, a bear on the flute warming up a violinist, street artists dancing in the market, a bell-ringer ringing the bells. Stylish Hutsuls with extravagant mustaches engaged in Hutsul affairs: hunting, smoking, making love, and arguing. Everything is yellow-green, as if flooded with summer sunlight. Everything blooms and abounds. This is the world of Oleksa Bakhmatiuk, one of the most famous and successful Ukrainian artists of the nineteenth century.

He did not consider himself an artist. Oleksa Bakhmatiuk was a potter and specialized in tiles. All of these heavenly plants, animals, and Hutsuls decorated home stoves as well as other household goods such as plates and jugs. Thanks to his masterful paintings, Bakhmatiuk became a real superstar during his lifetime. His name was known not only in his native Kosiv, but also in the court of the emperor himself.

Not much is known about Bakhmatiuk’s biography. But what is known is that he was born on December 10, 1820, in the town of Kosiv, where he lived all his life. The pottery profession was passed down to him from his father. It soon became clear that Oleksa’s talent surpassed that of his father’s, so he was sent to study with the best Kosiv potter, Ivan Baraniuk. Later, Oleksa surpassed him as well — so much so that later Bakhmatiuk simply squeezed the Baraniuk family out of the tile business. As a result, Ivan Baraniuk’s son Mykhailo was already only making bowls.

Oleksa gained respect among Kosiv colleagues. For some time he headed the local pottery shop. There are few memories of contemporaries left, but from them it is possible to recreate an image of ​​the master: he was short, loud, modestly dressed, always had a pipe in his mouth, and was in love with his work. “What will it be?” He would say to himself as he was about to paint. “Maybe a hare, maybe a flower, or maybe some patterns…”

Oleksa Bakhmatiuk’s talent grew every year, and with it fame. His products were successful in the Kosiv market, and later far beyond. For instance, they were the talk of the 1873 Vienna Crafts Exhibition. Articles and notes about Bakhmatiuk appear in Ukrainian and foreign periodicals. In 1879, the administration of the Lviv (Lemberg/Lwów) City Museum of Arts and Crafts commissioned various works from Bakhmatiuk (which would later be included in the album “Pottery from Kosiv: Ornaments of Domestic Industry of Ruthenian Peasants,” 1882).

At the Kolomyia Industrial Exhibition in 1880, Bakhmatiuk received a gold medal. There, Emperor Franz Joseph became acquainted with the work of the famous tilemaker. The emperor was delighted — he bought a tiled stove and many other smaller pieces from Bakhmatiuk.

In the last decade of his life, Bakhmatiuk no longer sold his ceramics at the local market. Instead, clients came to him to his workshop. Prices were high, but that didn’t scare buyers away.

Kosiv has always been famous for its ceramics. So has the whole Hutsul region. There is a lot of clay in this region, so pottery flourished there for hundreds of years.

The technique of making Hutsul pottery is called “rytuvannia.” After the first firing in a pottery kiln, the piece is painted in green, brown, and yellow paints. The piece is covered with a transparent glaze and fired a second time. This technique is unique; Kosiv painted ceramics are included in the UNESCO List of the Intangible Cultural Heritage of Humanity.

In terms of technique, Bakhmatiuk did everything traditionally. But his style cannot be confused with any other. It is most pronounced in his mature works. All those wavy pants, typical heads in profile, short moustaches. We often see a special Bakhmatiuk flower — a giant sunflower-like flower in a yellow halo. Art historians also draw attention to the religious motifs in his drawings. He often portrays saints, but treats them simply, without mysticism. Domestic dogs can be seen running under the feet of St. Nicholas.

In total, researchers attribute about a hundred stoves and stove ensembles to Bakhmatiuk. Each one has a few dozen story-telling tiles. It is impossible to count the number of other works (candlesticks, bowls, jugs), but we suspect that the number is approaching infinity.

Bakhmatiuk’s obituary has been preserved in the Lviv newspaper Dilo (1882). It also shows that the master’s surname was written in different ways, including by Oleksa himself. Sometimes he is Bakhmatnyk, sometimes Bakhmitskyi, sometimes something else.

“In Kosiv, death took Bakhminskyi, a Rusyn, a man of great talent and wide fame, whose obituary now appears in foreign magazines. He was a peasant, uneducated, a Kosiv Hutsul. As a self-taught potter, he made pots, jugs, and bowls that were works of art. Everyone was fascinated by his drawings with their gentle simplicity and naivety, fascinated by the execution, imagination, and color. They started talking about his talent, about his ingeniousness, they started buying, until someone bought a pair of clay lanterns from the Kosiv potter and took them to Paris. One of the archdukes, being in Galicia, saw them, bought a pair for himself, and because of that the artist gained wide fame and estate, because his products became very expensive and reached an unprecedented price. Then he became proud, but his imagination and creative ways were not changed. The life of this innate talent, maybe genius, was interesting and unusual.”

Kosiv painted ceramics is still impressive due to its unique style and remains popular among admirers of folk art. The art will still live. But no one has reached Bakhmatiuk’s ingenious solar lightness. Collectors hunt for his tiles, the price for one piece can cost several hundred dollars. And the drawings themselves, although they may seem naive, look quite relevant and continue to inspire new generations of ceramists and illustrators. It is said that even bears start to play flutes when they see Bakhmatiuk’s tiles.