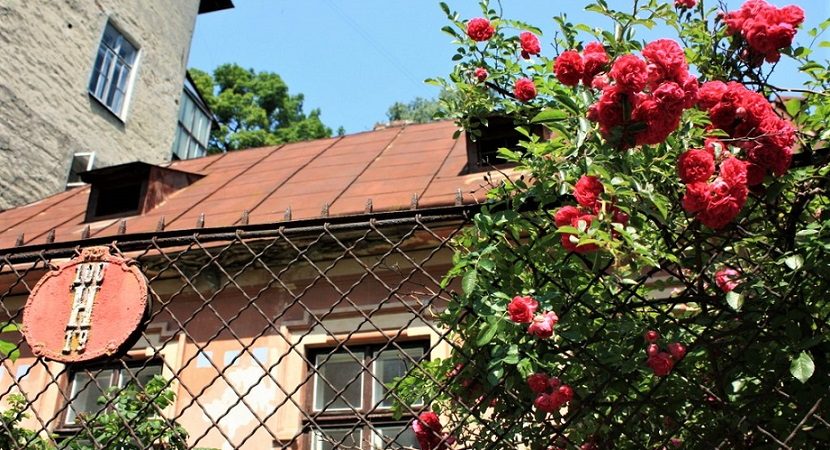 Marker plates, which indicate the location of hydrants or valves, can be found all over Lviv. The plates were attached to the facades of buildings to display information about the utility as well as to ensure that the hydrant or valve could be found even if the road was covered in mud or snow.

The marker plates appeared with the introduction of the modern sewerage and plumbing system in Lviv, which means most of them date from the Austrian era.  Some, however, may date from the interwar period.

Many of the metal plates remain in their original locations, though some have been plastered or painted over, and, of course, others have been removed.

The plates have the letter “H,” “S,” or “Z” — abbreviations for Polish words (Polish was the official language in Galicia from the 1860s until WWII):

Marker plates can also be found on fences and posts.

Under the marker plates we find the letter and numbers painted directly on the building, as can be seen in places where plates have been removed. This was either a temporary solution or an even older method used for marking the locations of the hydrants and valves.

It is not surprising that these prewar relics survived the wars and the Soviet era—their function stayed the same and they remained vital to the functioning of the city. And even though Russian and Ukrainian would come to replace Polish as the language of the urban landscape, the Polish abbreviations and inscriptions were inconspicuous enough that the marker plates, as well as the manhole covers themselves, were left undisturbed—the hassle of replacing them was definitely not worth the effort.

And although no major changes are being done to the sewerage or plumbing systems in the historical neighborhoods of Lviv, occasionally the need to add new marker plates arises. And so here and there one can find plates with the Cyrillic letters “ПГ,” which stand for the words “пожежний гідрант”—Ukrainian for “fire hydrant.”