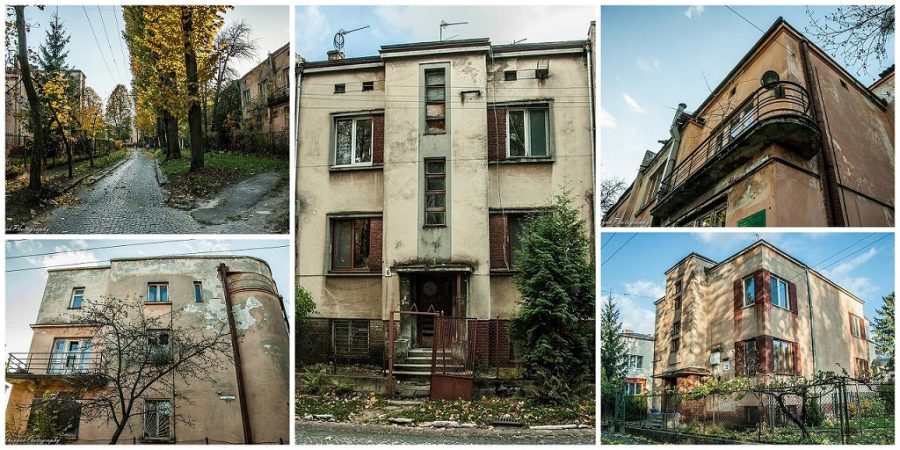 After overcoming World War I and the financial crisis, housing developments (often called “colonies”) started to be built in Lviv for private and professional organizations. Many were inspired by Ebenezer Howard’s concept of a garden city. One such project was the residential quarter built for professors and educators.

“The Closed World of the Professors’ Colony”

On a hill, as if on an island completely surrounded by the old Lychakiv-Pіdzamche railway line, there is a very unusual interwar housing colony.

Why, in a rather hard-to-access place, to which it was difficult to connect household utilities, in the ring of a railroad, which obviously did not provide tranquility to the area, did prominent Lviv architects decide to build a residential area?

Construction began in 1935. At the same time, in the ’30s, from the Lychakiv Station (located right next to the Professors’ Colony), a tram went straight to the city center. And so this area was in fact not so isolated from urban life. The project was designed by Tadeusz Wróbel, Leopold Karasiński, and Maximillian Kochura.

Up to 90 buildings in the style of functionalism were planned. The houses were one-, two- and three-stories. They were surrounded by gardens, flower gardens, and orchards, and behind the gardens there was a view over Znesinnia park and Kryvchytsia.

The construction was supervised by the Construction Committee and financed by the Society for Lending and Construction for Employees of Secondary and Higher Educational Institutions in Lviv. The union of educators effectively built their own district, hence the name — Professors’ Colony.

Some houses are attached to one another, others stand alone, drowning in the gardens and flower beds. Most of the streets are so narrow that a single car can barely pass.

Today the Professors’ Colony has lost its original appearance. Only a few unaltered villas and authentic cobblestone roads remain.

The houses that were spared from so-called restoration are immediately recognizable by the characteristic functionalist framing of the portals and windows with clinker bricks, the curved corner windows, and, though faded, the still very stylish matte plaster colors.

Part of Iryny Wilde Street looks like the set of a mystical film.

The old functionalist buildings are abandoned, with broken windows and cracked facades.

Trees grow from the stylish balcony constructions, curtains wave through the broken windows, tattered wallpaper can be seen through the openings.

The authentic wooden doors are now decorated with dense cobwebs.

Until recently, a branch of the hospital of the Lviv Railway was located here, but now nobody needs the crumbling buildings. Unique examples of interwar Lviv’s residential architecture are “dying” quietly and imperceptibly.