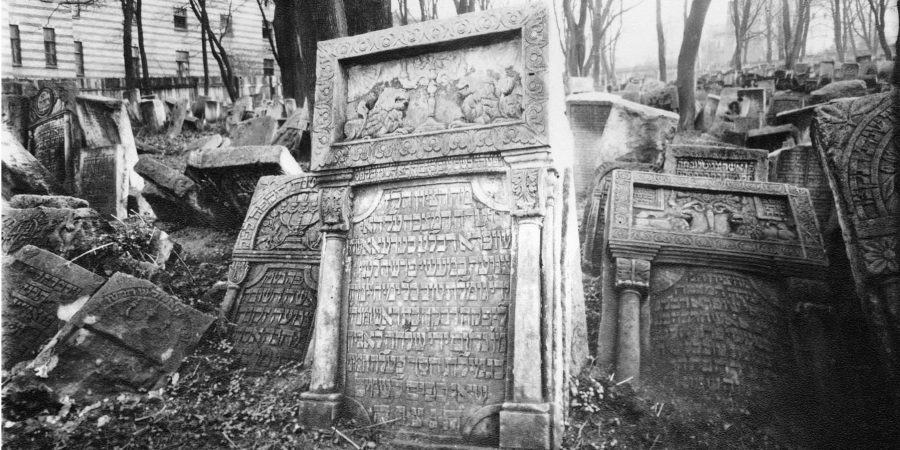 While many old Jewish cemeteries still remain around Galicia, the same cannot be said of the Jewish burial grounds in Lviv (Lemberg / Lwów). Only found fragments of their ancient tombstones (matzevah) — which were used by the Nazis and Soviets as pavement and building material — remind us of the two city and three suburban village cemeteries that once existed in and near Lviv. Just as the synagogues and other Jewish traces, the cemeteries were destroyed during World War II.

An interesting fact on terminology: In Galicia, to refer to Jewish cemeteries, Ukrainians used the name кіркут (kirkut) and Poles kirkut, kierkow, kierchol, kirchol, from German: Kirchhof (“churchyard for the burial of the dead.”) Ukrainians also used the words окописько (okopys’ko), окопище (okopyshche) meaning “trench,” as the place was usually surrounded on all sides by ditches and earthen ramparts. Yiddish speakers used Hebrew-derived names such as beys-oylem.

Location: In the Kraków suburb (surrounded by today’s Rappaporta, Bazarna, Brovarna, and Kleparivska Streets)
First mention: 1414
Designated for: Jews from across Galicia
Closed: 1855
Destroyed: During WWII and ultimately in 1947
Today: Under the Krakivskyi Market

The first mention of the old Jewish cemetery dates back to May 27, 1414, when the Jews paid a tax on this land. The plot for the cemetery was allocated to Jews for long-term use on the so-called obshary (land that surrounded the city around and belonged to the city). It is possible, however, that burials dated as far back as the 14th century.

The cemetery of the Jewish community was located in the Kraków suburb. As most provincial Jewish communities were not allowed to have their own cemeteries until the end of the sixteenth century, during the late Middle Ages, the Old Jewish Cemetery in Lviv became the final resting place for all Jews in Galicia.

The territory of the cemetery grew after repeated purchases of private plots in the seventeenth century, until it reached a size that is bordered by the modern Rappaporta, Bazarna, Brovarna, and Kleparivska Streets. The outline can be found on the ancient plan of the city that was executed by Jean du Desfilles in 1766 (see first map above).

Generations of Jewish residents, including the most distinguished members of the Lviv Jewish community, were buried here until 1855, which is when the new Jewish Cemetery was opened not far from Janowska Street.

In 1899-1902, the former Jewish hospital of the Maurycy Lazarus Foundation (8 Rappaporta Street) was built on part of the territory of the cemetery.

At the beginning of the twentieth century, the cemetery received monument status from the Austro-Hungarian government. This status was confirmed by the government of interwar Poland.

During the Nazi occupation of Lviv, the German authorities ordered the destruction of the Old Cemetery. What remained of the cemetery was razed in 1947 by the Soviets, when the Krakivskyi Market was built on top of it. The headstones were used as construction and paving material across the city.

Today most of the cemetery lies under the bustling Krakivskyi Market. On a small patch of land next to the Jewish Hospital, pieces of the old tombstones have been returned.

A new Jewish cemetery was opened in August 1855. It was located off of Janowska (Yanivska) Street (now Shevchenka Street). Many esteemed members of the Jewish community were buried here.

In 1890, the Jewish community purchased land from Count Stanisław Skarbek to expand the cemetery. The same year, a neo-Romanesque brick fence, designed by architect Alfred Kamenobrodski, was built around the cemetery on Yeroshenka Street. A fragment of it has survived to this day. An administrative building, designed by architect Solomon Kroch, was built to the left of the main entrance.

In 1912, the construction of the Secession-style Beth Tahara mortuary chapel was begun, designed by architects Roman Feliński and Jerzy Grodyński. The construction work was supervised by the famous architect Michal Ulam.

In 1930, the Jewish community expanded its cemetery again. A main alley was built, which was flanked by dense rows of graves.

During the German occupation of Lviv, the cemetery graves and buildings, including the Beth Tahara, were destroyed. Just as the headstones from the Old Jewish Cemetery, the matzevah from this cemetery were used as pavement and building material.

After the war, the Jewish religious community tidied up the grounds, collected and buried the remains of Jews executed in 1942-1943, as well as the remains from the ancient burials, and erected a granite obelisk in their memory. They also added a room, which was used as a Beth Tahara, to the administrative building.

In 1962, the Soviet authorities disbanded the Jewish religious community and annexed the new Jewish cemetery to the nearby Yaniv Christian Cemetery. It is now three-quarters full of Christian tombs, and there are several dozen Muslim burials in the south. Jewish burials are concentrated around the main alley.

Many of the headstones that are still being found as pavement around Lviv are from the Janów Jewish cemetery, such as these seen below.

When fragments are found, the Lviv Volunteer Center of the All-Ukrainian Jewish Charitable Foundation “Hesed-Arieh” retrieves them and then returns them to the cemetery, as seen below.

In addition to the two large city cemeteries, a few smaller cemeteries were established in nearby villages, which later became part of Lviv.

A Jewish cemetery was located in the suburban village of Zniesienie (Znesinnia), where at the time lived about 1,000 Jews. The cemetery was established due to the difficulties in transporting bodies to the new Jewish cemetery: the transport had to pass the city tollgates and pay fees. Furthermore, during the cholera epidemics, it was forbidden to transport cholera victims through the city. Hence, the Ose Tov society bought 1.5 ha of land near the Lviv-Krasne railway for a cemetery. At the beginning of the twentieth century, Jews from other nearby villages were also buried here.

Immediately after the war, the Soviets used the territory of the Zniesienie cemetery as a motor depot.

A Jewish cemetery near the Kulparków (Kulparkiv) psychiatric hospital opened in September 1884. In Soviet times, a factory of reinforced concrete products was built on the territory of this cemetery.

At the beginning of the twentieth century, in Zamarstynów (Zamarstyniv) there was a small Jewish cemetery, which closed before the First World War. Later it was destroyed.

Currently, the small Jewish community in Lviv does not have a separate cemetery.

Pieces of tombstones from these cemeteries have been found in some of the most unexpected places in the city. And they are still being discovered to this day. In the fall of 2021 my friend and I found a fragment of a matzevah partially buried in Lychakiv Cemetery – where Jews were never buried. Thus the fragment must have originated from one of the Jewish cemeteries.

Also in Lychakiv Cemetery, I found an imprint of Hebrew letters left on the headstone of a grave, where a plaque had been. It seems that the backside of a gravestone was used on a new grave.