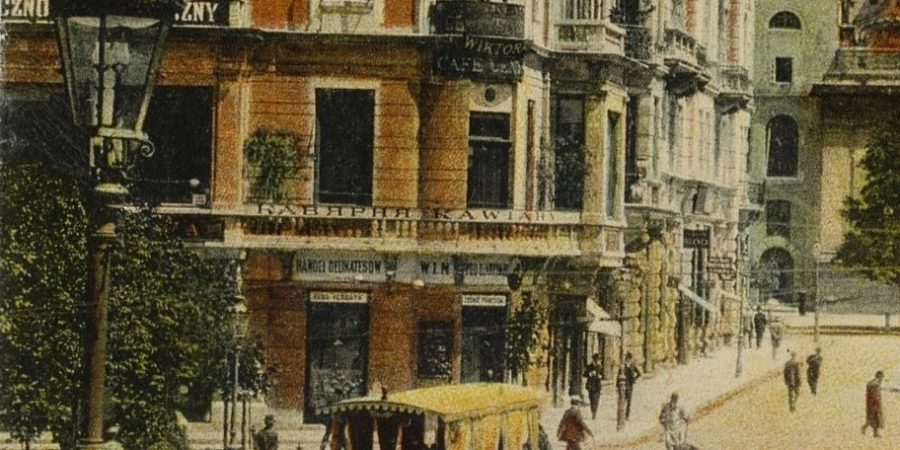 In addition to this, several other factors also influenced language usage in the city: the official languages in Galicia were German and Polish and not only Poles, but Jews and other nationalities would have spoken Polish in addition to their native languages. Also, at times, there was tension between Ukrainians and Poles, and owners did not want to lose wealthy Polish customers by using a lot of Ukrainian signage. Finally, the prevalence of Yiddish (second most common after Polish) can be explained by the fact that a lot of Jews were engaged in trade and shopowners.

The limited use of Ukrainian/Cyrillic signage is observed in old photographs of Lviv, in which Polish dominates. However, this does not mean that Ukrainian was entirely absent from the urban landscape of the city. Indeed, I was able to find quite a few examples of Ukrainian prewar signage:

On the right hand side if you zoom in one can see “Рукавички Спожарского” above the Polish equivalent:

Below is a photograph of a furniture shop. In addition to Polish, there is Cyrillic lettering: “Магазин Мебелей.” It’s written in either Iazychie, a language used by Ukrainian Russophiles or old/non-standardized Ukrainian.

Some of the few storefronts that would have always had Ukrainian signage were those of Ukrainian cooperatives and associations, such as Nardona Torhovlia, Tsentrosoyuz, and Maslosoyuz — though typically Polish was also present.