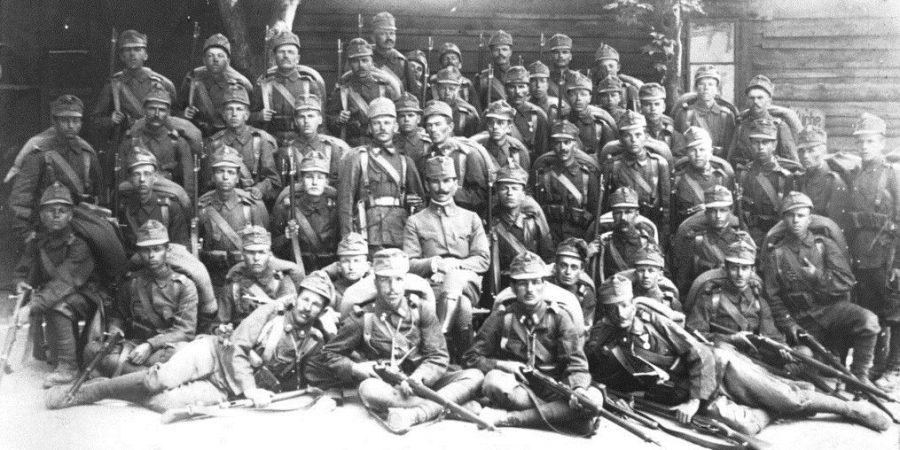 “Ked’ my pryshla karta” (Кедь ми прийшла карта) is a folk ballad from the Lemko region (Lemkovyna or Lemkivshchyna), a mountainous territory that stretches along the present-day borders of Ukraine, Poland, and Slovakia. The area that today belongs to Poland and Ukraine was a part of Galicia until WWI, while the area that today belongs to Slovakia was part of the Kingdom of Hungary in union with the Austrian Empire.

Originating in a borderland, it is no surprise that numerous versions of the song exist in different languages and dialects of the Carpathian highlanders, in particular in Lemko and in Slovak. In fact, Rusyns, Lemkos, Slovaks, and Ukrainian Galicians all consider the song to be their own. Although sung in different languages and with slightly different lyrics, the theme of the song is similar across all versions: about a man who is recruited to the Austro-Hungarian army.

The time of the origin of the song is attributed to the period of the Austro-Hungarian Empire (1867-1918) — a period of wars, which corresponds to the plot of the song (recruits, soldiers), which tells of a young man who is recruited to the army but asks his father to go and serve for him. The man becomes ashamed and asks the musicians to play him a farewell csárdás (a traditional Hungarian folk dance). He dances, cries, and sees three girls in tears: one is his sister, the other is his suitor, and the third is pregnant.

Today, there are Ukrainian, Lemko, Carpatho-Rusyn, and Slovak versions, as well as a Romani-infused one. There is even a 1930 Soviet-released Ukrainian version sung by a Jewish singer.

This song is well known among Ukrainians, in particular the Lemko version. This song was sung by Ukrainian Sich Riflemen in 1914, during WWI. But its first published record is from 1922 in the collection “Сурма. Збірник воєнних пісень” (Lviv-Kyiv: Chervona Kalyna, 1922). Thirteen years later this song was printed in Canada in the collection “Лемковскы народны співанкы” (Cleveland, 1935). This song was also sung by soldiers of the Ukrainian Insurgent Army (UPA) during WWII.

One of the more common Lemko versions:

When I got my draft notice,
I pleaded to my old man:
“Daddy, oh my daddy, do as I wish,
Go fight that war for me.”

The musicians began to play the csárdás,
And tears began to pour from my eyes,
Nobody will cry, neither father nor mother,
Only three girls will cry for me.

Even within the same language there are various versions — WikiSpiv has collected many of the variations here.

A Little Bit on Austrian Military Conscription and Recruitment

The Austro-Hungarian Empire introduced universal conscription in 1868. The conscription system had previously included various exemptions for property owners and educated classes, such as the nobility and clergy, burghers, hand workers, merchants, and farmers, but now all of the male population was required to serve in the military.

At first they recruited from the age of 23, later the age limit was lowered to 21, and then to 18. The minimum height since 1889 was 153 cm. Almost half of the Austro-Hungarian conscripts in 1873-1912 were considered unfit for health.

The recruitment team would come to a village with a certain quota of how many people should be recruited to the army. The draft notice letter would generally go to the youngest able-bodied male in each family, but another in the family could take that letter and go in his stead. So the hero of the song began to search, to ask his dad to go and serve for him.

In Galicia, there were 18 district offices that recruited. The branch convoy for Eastern Galicia was located in Drohobych.

On average, Galicians accounted for about 16% of the total number of Imperial and Royal army. The highest (18%) share was in 1871, when 16,500 men went to serve. The number of recruits grew from conscription to conscription: in 1910, 26,541 men had already been called up.

Released in the USSR in 1930, a Ukrainian version sung by Jewish singer Irma Yaunzem.

1 thought on “‘Ked’ my pryshla karta’: An Austro-Hungarian Recruit Song”