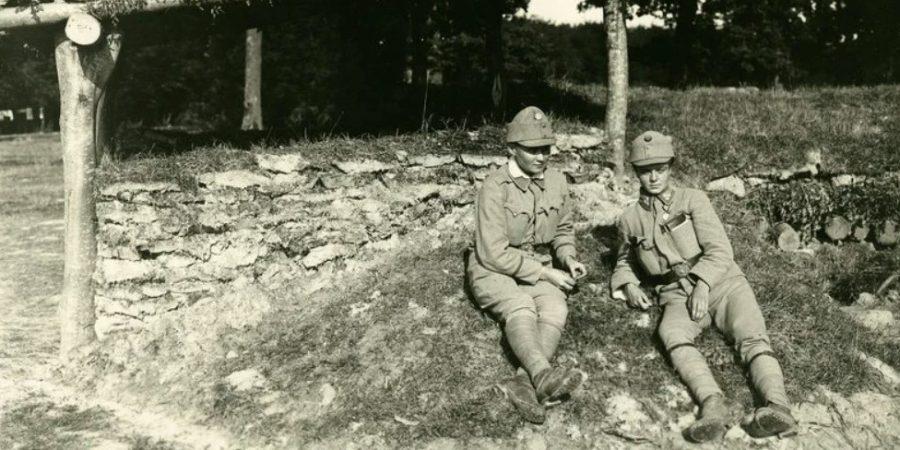 By Mariana Baidak for Lokalna Istoriya (original in Ukrainian)

“Out of my love for Ukraine, I took a rifle and went to the field to beat the enemy with physical force,” said Olena Stepaniv, the most famous Ukrainian military woman, more than 100 years ago. Since then, the issue of women’s participation on the battlefield has not lost its relevance. We remember the beginning of the militarization movement of Ukrainian women through the prism of the lives of three Sich Sharpshooters: Olena Stepaniv, Hanna Dmyterko, and Sofia Halechko.

The Peculiarity of Ukrainian Women on the Front

In 1915, Austrian journalist Franz Molnar noted in his diary the “peculiarity” of the Ukrainian units of the Austrian army. He was surprised by the fact that the Ukrainian Sich Sharpshooters (USS) “includes girls dressed in regular field uniforms who perform field service on equal footing with men. They carry rifles, take the oath of allegiance, are promoted in the military ranks, they receive military honors.”

From this account it could seem that during the First World War the way to the front was open to Ukrainian women and that they did not face social prejudices, official bans, did not have disagreements with relatives…

In the prewar period, Plast [scouting organization] and Sich [gymnastic organization] had about 40 women who could create a separate unit. However, the lack of permission to serve in the regular army prevented it. Some women managed to get to the front through personal acquaintances with officers. Only a few built a military career and became legends of Ukrainian history.

Olena Stepaniv: ‘Out of my love for Ukraine, I took a rifle and went to the field to beat the enemy with physical force. That’s all.’

Olena Stepaniv (1892–1963) was the most active woman who managed to overcome the patriarchal system of Austrian Galicia. She came from a priest’s family, which a priori doomed her to the future role of “mother-wife- housewife.” But Olena went against the tradition: she was educated at the Teachers’ Seminary, the Lviv University at the Faculty of Philology, and after the war received a doctorate in philosophy from the Ukrainian Free University.

Olena was an active member of the sports and military societies Sich, Sokil, and Plast. There she acquired her first military skills — handling weapons, orienteering, and more. The outbreak of the Great War did not come as a surprise to Olena. The decision to join the Ukrainian Sich Sharpshooters, given her military training and national views, was logical. The motivation, she said, was a youthful impulse; bans imposed on women; the boredom of everyday life and the desire for unusual adventures; an escape from life’s responsibilities; a desire to prove to the world that women are capable of everything.

Lawyer and politician Volodymyr Starosolskyi helped Olena get to the front. When she went dressed in men’s clothing to have her photo taken for her identity papers, the photographer suspected she was a woman. She was reported to the police who almost sent her to Thalerhof [Austro-Hungarian concentration camp]. It was Volodymyr Starosolsky who saved Olena from the camp and persuaded Ivan Chmola, the initiator of the Sich Sharpshooter movement, to take the girl to the front.

During her service, Olena Stepaniv received the rank of khorunzha [standard-bearer], became the commander of a company, and was awarded the Medal for Courage and the Military Cross of Charles V. For two years, from 1915 to 1917, she was a Russian prisoner.

After the war, Olena taught at the university, was active in academic and civic life. However, it took her a long time to get used to a peaceful life: “I got used to the skirt, but believe me, it was very difficult for me from the very beginning. I felt completely uncomfortable in women’s clothing. It took a long, long time to ‘return to normal’ in body and soul.”

In the first postwar years, Olena Stepaniv’s strict soldierly character was felt by her students. “Suddenly, a sharp, creaking voice of the command was heard. ‘Sit down, get up, sit down, get up!’ until we all, as one, silently obeyed the order,” Olena Zalizniak recalled class with Olena Stepaniv.

Handzia Dmyterko: ‘Everything weighs down mercilessly. Some throw away bread, but everyone keeps the rifle’

Hanna Dmyterko (1893–1981) came from a traditional Galician family, which provided her with training at a teacher’s seminary. From a young age she was an active member of Plast and Sich, where she became friends with Olena Stepaniv. She underwent military training under the leadership of Ivan Chmola: “We, divided into two groups of opponents, ‘fought,’ sent patrols to expose and deploy the forces of the ‘enemy’ to attack when least expected, etc.” From school, Handzia believed that an independent Ukraine could be won only by arms, so she saw the Great War as a chance to get what she wanted.

News of the world conflict found the girl in her native village of Pidberizka. She volunteered because of a “youthful urge and sense of duty to her homeland.” She had to leave her mother and grandmother at home, who did not approve of her decision.

In the USS, Hanna Dmyterko performed various tasks — medical, clerical, served in the kurin [combat unit] of Hryhoriy Kossak, took part in the battles near Lysovychi and Nad Strypoyu. The woman was on the verge of death many times. In her memoirs, she wrote that military life was quite difficult: “I couldn’t sleep because it was cold and the heavy gunfire unnerved me. The bullets were flying between us. In the morning, a German doctor showed me a bullet in the fence that got stuck over my head at night.”

During the Polish–Ukrainian War, Handzia worked in the auxiliary service in a USS brigade. She received the title of corporal. There she met the vistun [name of military rank] Vasyl Ratych, whom she married in 1919. It was then that she stopped her military service. Hanna and Vasyl had four children. Her sister-in-arms Olena Stepaniv became the godmother of one of their sons. Olena believed that “Handzia was a role model for all women”: “She was a wonderful wife, a gentle mother. A good and sensitive adviser and tireless worker. But most importantly, she remained a Ukrainian patriot.”

Before the Second World War, Hanna was active in the Ukrainian community: she worked in the Union of Ukrainian Women, Women’s Community, Prosvita, Plast. After the arrival of Soviet power in Galicia, her family was threatened with deportation as an “undesirable intelligent element,” but the arrival of the German army prevented this. At that time, the Ratyches were active in the Ukrainian social and political life of Rohatyn. But already in 1944 they had to flee to the West — through Krynica in Slovakia to Bayreuth in Bavaria. Later they moved to America, where the family ultimately settled. However, they left without two sons, who went to serve in the Ukrainian Galicia Division. One of them died in a battle with the Bolsheviks near Brody.

Sofia Halechko: ‘If you only knew how terribly I long for life in the fields and how bitter it is for me to live here’

The worldview of the future USS khorunzha Sofia Halechko (1891–1918) was formed in the conditions of her Ukrainian-Polish upbringing. She grew up in a home where Polish language and culture dominated, and studied at the Polish Juliusz Słowacki Girls’ Gymnasium in Lviv. Her choosing a Ukrainian identity was greatly influenced by her Ukrainian father, as well as by her participation in the Sich Society in Graz, where Sofia studied at the Faculty of Philosophy. It was there that she was caught up in the First World War.

In the wake of the national upheaval, as well as due to a personal tragedy — the loss of her beloved boyfriend Andriy Kurovets — Sofia decided to join the USS. She bought a military uniform and shoes at her own expense and donated the rest of her savings to charity. This decision split the Halechko family. Her mother and aunt categorically did not support her position, believing that “this desire to appear equal to men — even in war — was born under the influence of emancipatory literature.” She received approval only from her father.

During her military service, Sofia excelled: she wore the rank of khorunzha, was the commander of a platoon in Zenon Noskovsky’s company. For her service she received the Medal of Courage of the 2nd Class.

She could not imagine her life without military service. Being constantly transferred to the rear and ultimately being banned from fighting on the front was very hard on her.

“If you knew how terribly I long for life in the fields and how bitter it is for me to live here. Please let me join the unit, I would very much like to see you. The end will probably be like three comrades in the unit who went crazy, or І will shoot myself. I’m really scared here. I’m losing my mind. This isn’t idle talk, it’s really not worth living here. How I envy you all. It’s so base to throw someone out after two years of service. I don’t know why I’m so tormented,” Sofia Halechko wrote to USS lieutenant Roman Sushko in a letter dated July 22, 1916.

Sofia never overcame the patriarchal system among her brothers-in-arms. This position on the part of men led her to despair. Two years after this letter, news came of the girl’s death. While on vacation with her friend Iryna Pidvysotska, Sofia “fell into a whirlpool and did not swim” while swimming in the Bystrytsia River.

In 1981, almost 90-year-old Hanna Dmyterko said: “Ukraine was once called Roxolania, which means ‘land of beautiful girls.’ We were called so not by chance. Because beauty has always been one of the characteristic features of Ukrainians. Along with heroism and wisdom, it makes our people eternal, great, and invincible. That is why we believe that with God’s help Ukraine will be resurrected and become a rich and powerful state, and the Ukrainian in it will become a full-fledged master in his own home. And no foreigners will ever again dare to impose their will on us.”

None of these women who took up arms more than a hundred years ago saw an independent Ukraine. Their successors face similar challenges today to get to the front and defend their homeland. Olena Stepaniv’s main dilemma was never solved: “We did not prove what our rightful place was, what belonged to us and what was appropriate, nor did we clarify what work best suits a woman during a war according to her knowledge, occupation, age, and physical strength.”

Modern debates about women’s military registration in Ukraine have caused panic, chaos, and an outpouring of jokes. This only confirms the unresolved issue of their participation on the front with weapons in hand. In addition, it confirms the ignorance of our society in military affairs in the eighth year of the Russian–Ukrainian war.