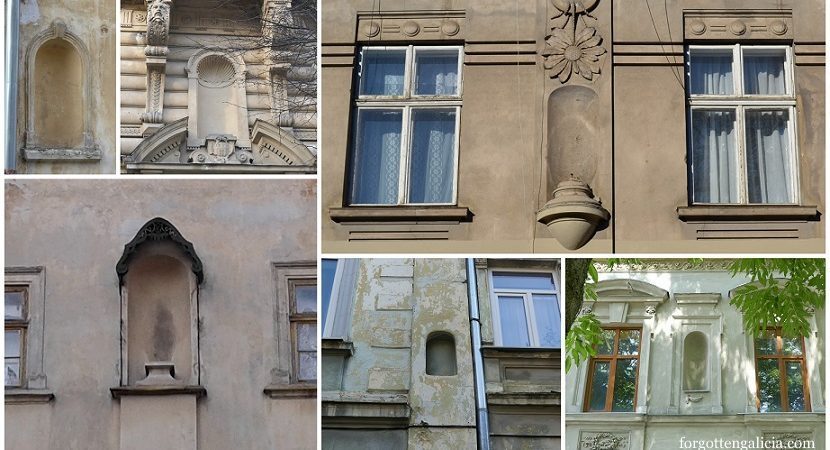 An interesting phenomenon in Lviv is its many “ghost statues.” This is what I call the empty niches found on the facades of buildings where once stood statues, especially of religious figures such as the Virgin Mary or saints.

Under the Soviet Union, traces of religion were removed from the urban landscape—probably by both the Soviet authorities who destroyed them as well as by the residents themselves who wanted to hide them in a safe place until freer times. (And of course statues maybe have gone missing for other reasons: they could have been stolen, broken, etc.)

As a result, all around the city one can find niches with pedestals or mounting elements, but with no statues. Some have been returned, new ones have been installed, but many still remain statue-less.

Niches have been used in architecture for centuries, for purely decorative purposes (to display ornaments such as vases, secular statues, or even left empty), as well as for displaying religious figures.

Galicia was traditionally a religious region, the majority of the population was Catholic—Greek or Roman. So it is no wonder that architects and home builders included niches in their design for saints or for thе Virgin Mary. Such niches are found not only on more elaborate buildings in the center of Lviv, but also on simpler homes in the outskirts. In fact, they are also fairly common on houses in the countryside, especially in the regions closer to the Polish border.

Despite efforts to fill the niches, many in Lviv still remain empty.

Niches are also found indoors, especially in entranceways and stairwells. Most today are empty (some may have always been empty), but I did find one with a vase. Statues have been returning to their places: maybe the original ones which had been kept hidden or new ones. And of course some, especially the non-religious ones, have always been in their place. By far the most in Lviv display the Virgin Mary.

Niches with the Virgin Mary Niches with Saints or Other Figures

In the old city center there are quite a few niches with saints. Here are just a few. The first one, located on Lviv’s old fire station, is of St. Florian—the patron saint of firefighters.