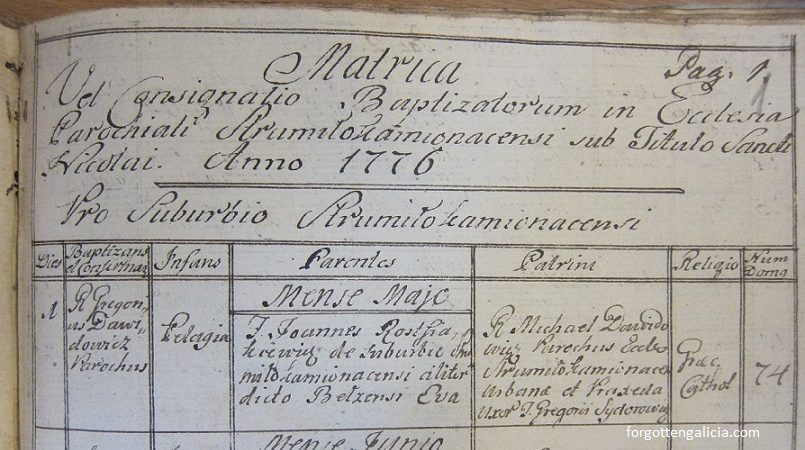 Metrical books (also known as vital records) are birth, marriage, and death registers kept by the Church. “Greek Catholic records were initially kept in Church Slavonic, then in Latin, and finally in Ukrainian. During periods of transition, the records occasionally show the use or mix of two languages—Church Slavonic and Latin, or Latin and Ukrainian…The Habsburg authorities had the Roman and Greek Catholic clergy keep vital records for them instead of establishing a separate bureaucracy for that purpose. Accordingly, Emperor Joseph II issued decrees establishing the procedures to be followed and the nature of the records to be kept,” from John D. Pihach’s Ukrainian Genealogy.

Several of my ancestors were Greek Catholic priests in Galicia, starting as far back as at least 1744. Knowing their names, and when and where they served, I was able to find the metrical books that they kept while serving as parish priests. It was quite an amazing feeling to to hold in my hands 250-year-old books that were handwritten by my direct grandfathers. Not only was I also able to find the birth records of their offspring (my direct ancestors), but also having found books by three generations spanning 70 years from the Kingdom of Poland through the territory’s incorporation into the Austrian Empire, I was also able to see how the methods and languages of record keeping changed over the years.

The Reverend Mykhailo kept his parish registers in Church Slavonic, writing each entry as a paragraph. (Interestingly, the cover is written in Latin—maybe the label was added at some later time.)

In the second row of the first paragraph under the heading is my grandfather’s name. Each entry he started with “I, the priest Mykhailo Davydovych, pastor of the Church… baptized…”

The following record was kept by his son Hryhoriy, who became parish priest in Kam’yanka-Strumylova in 1777.

When Hryhoriy took over, the town was already part of the Austrian Empire; however, it took some years after 1772 for record keeping to become standard. Here he continues to uses Church Slavonic like his father. And like above, he started each entry with the date, and with the words: “I, the priest Hryhoriy Davydovych (Григорій Давидовичъ), pastor of…”

Some registers he wrote in Church Slavonic, but in a register from 1776 he kept the records in Latin, and structured them with hand-written columns. (Though it is bit confusing because in the above record that seems to date from 1781 he used Church Slavonic, while in the below record from an earlier date he used Latin.)

In the second column of the first entry we can see his name, now in Latin using Polish orthography (which is how first names were normally entered): “Gregorius Dawidowicz Parochus”

Here is the entry for his daughter Sophia (a great aunt of mine). His name can be seen in both the second and fourth columns, as parish priest and parent:

This page is from the year 1818, where he entered the birth of his daughter Anna, my great-great-great grandmother. He uses the Latin form of his name: Paulus Dawidowicz