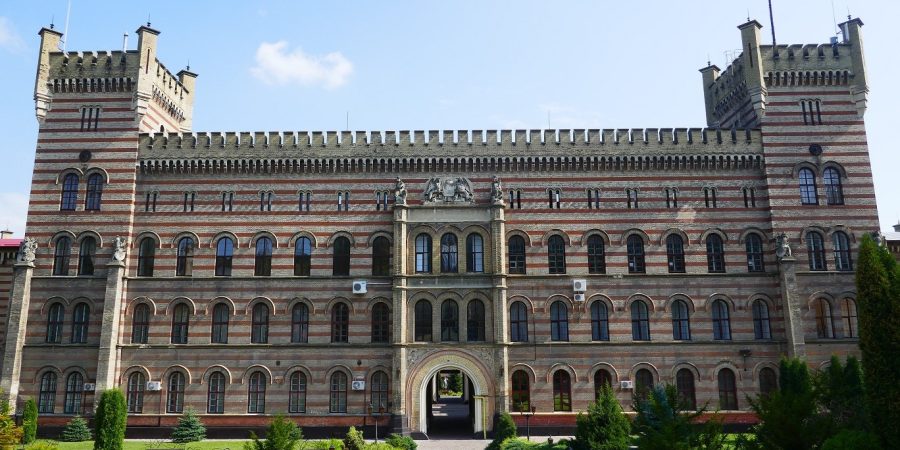 The Romantic historicist ensemble of the former Dom Inwalidów / K. K. Invalidenhaus (Invalids’ House) is a valuable monument of architecture and history. An initiative of the emperor of the Austrian Empire, the Dom Inwalidów was a retirement home for disabled military veterans in Lwów / Lemberg from 1863 to 1918. Today, this majestic building is home to the cadets of the Lviv State University of Life Safety.

Retirement homes for veteran soldiers, so-called invalids’ houses, existed in many cities in Europe. The oldest and most famous of these is Les Invalides in Paris, founded in the second half of the seventeenth century. Its church, Dôme des Invalides, is the final resting place of Emperor Napoleon.

In the Austrian Empire, homes for retired veterans were introduced after the revolutionary events of 1848-1849 at the initiative of the young Emperor Franz Joseph I. The first such institution was the invalids’ house in Vienna; later similar institutions were opened in several other cities of the empire, including Prague, Pettau, Padua, Tirnau, and Althofen.

Finally, in December 1851, during his stay in Lviv, Franz Joseph I signed an order to build an invalids’ house in Lviv. According to Galician newspapers, the construction of the Provincial House of Invalids (Dom Inwalidów) in Lviv was intended to ensure that “Galician military who qualify as disabled can finish their lives in dignity on their own land, for which at a distance they feel a great longing.”

For the construction, the emperor’s treasury allocated 700,000 Guldens. Land in the Pilichów valley was used for the plot. This territory in Kleparów belonged to the army since 1811. Bricks for construction were provided free of charge from the city brickyard.

The emperor took the project seriously. He himself sought out an architect who could design the building. He chose Danish architect Theophil Hansen, who designed such masterpieces as the Vienna Arsenal, the Musikverein, the Austrian Parliament, the Academy of Athens, and the Zappeion.

In 1855, Hansen completed the building’s design, using his Vienna Arsenal as an example. The project envisaged the construction of a neo-Romanesque structure using colored bricks to create yellow and red stripes on the façade. The architecture is dominated by monumentalism, realized through the unique elongation of the building, whose length is 165 meters.

Construction began the following year, in 1856 – the year that Emperor Franz Joseph I visited Lviv for the second time. Edward Keller oversaw the work, which was completed in 1863.

The solemn inauguration of the Dom Inwalidów in Lviv took place on October 4, 1863, on the birthday of Emperor Franz Joseph I. The consecration was led by the Feldsuperior (high rank of a representative of the church in the army) P. Bradowski.

The newly established facility was originally a branch of Invalids’ House No. 3 in Tyrnau. In the late 1870s, the Lviv branch was transformed into an independent institution for the disabled No. 4 (one of four similar institutions remaining in Austria-Hungary).

The building was designed to house about five hundred veterans. The central part was intended for officers and the left and right wings for junior officers and soldiers. The commandant-general’s apartment and his office were located in the towers of the central part of the house. In one wing was a branch of the garrison hospital.

The invalids’ house was a full-time military establishment headed by a commanding officer (commander) – a major (later colonel). It also had an adjutant, a chief medical officer, a military chaplain, and a finance officer. The veterans that resided in the facility were organized into commander-led companies. They wore a special military uniform, which differed slightly from the service one.

In 1877, a branch of the garrison hospital and a small prosthetic limbs factory were located in one of the house’s wings. The establishment of the hospital improved the conditions at the city’s main military medical institution by freeing up more resources and space.

Lviv’s Dom Inwalidów was designed the style of a Neo-Romanesque fortress. The building is symmetrical in plan, comprising of a central building with a prismatic configuration complete with four massive corner towers and a large courtyard. From the central block project two wings with lateral avant-corps.

The main and back facades are decorated with allegorical sculptures by Cyprian Godębski and Abel Maria Perrier. On the facade on either side of the coat of arms of the Austrian Empire are two majestic sculptures: War (Mars) in the figure of a man drawing a sword from a sheath, and Peace (Venus) in the figure of a woman in a laurel wreath with a palm tree in her left hand and a scroll of paper in her right hand. At her feet lie a palette and brush – symbols of science and art.

In total, 26 sculptural elements and 8 bas-reliefs adorned the façade. Much of the sculptural ornamentation, especially from the inside, was lost, including statues of four famous Austrian field marshals and generals: Archduke Karl, Count Radetzky, Prince Schwarzenberg, and Count Schlick.

After the First World War, the building was used for the needs of the disabled and veterans of the Polish army, housing military veterans and a surgical hospital.

In Soviet times, care for veterans ended. In 1939, the 233rd NKVD Regiment was headquartered in the former Dom Inwalidów. The same unit returned to the building in 1944. At that time the sculptural decoration of the building was partially destroyed.

In May 1954, the Kyiv (later renamed Lviv) Fire and Technical College of the Ministry of Internal Affairs of the USSR was moved to the premises. Until 1972, a military unit and a police battalion were quartered on the first floor of the left wing.

On June 21, 2001, the Lviv Fire and Technical College was reorganized into the Lviv Institute of Fire Safety of the Ministry of Internal Affairs of Ukraine, and since January 2003, the institute has been subordinated to the Ministry of Emergencies and the Protection of the Population from the Consequences of the Chornobyl Disaster. In 2006, the institute was reorganized into the Lviv State University of Life Safety.

The Dom Inwalidów complex also includes the Chapel of the Protection of the Blessed Virgin, built in Roman-Byzantine style, located to the northwest of the main building.

The chapel was built in 1855-1863, at the same time as the main building. Architect Theophil Hansen designed the plan in the form of a Greek cross inscribed in a square. The presbytery is closed by an apse. The walls are made of red and yellow bricks, which form small crosses.

Starting in 1939, the chapel was no longer used for its intended purpose and fell into disrepair. For a long time it was used as a warehouse. The paintings on the walls were brutally whitewashed, the stucco and bas-reliefs destroyed, and the cross on the dome dismantled.

It was not until 1993 that the university administration decided to renovate the chapel. The warehouse was moved and in May 1994 a cross was erected on the chapel’s dome. The restoration and decoration of the structure was made possible thanks to donations from cadets and university graduates. The solemn consecration of the restored chapel was held on October 11, 1998, under the canons of the Ukrainian Orthodox Church.

Today, the Chapel of the Protection of the Blessed Virgin is the center of the spiritual life of the university. Worship services, held every Sunday and on holidays, are open to the public.

A Look at Dom Inwalidów on Historical Postcards

Many postcards depicting the building, with captions in various languages, including German, Polish, and French, were published before the war.