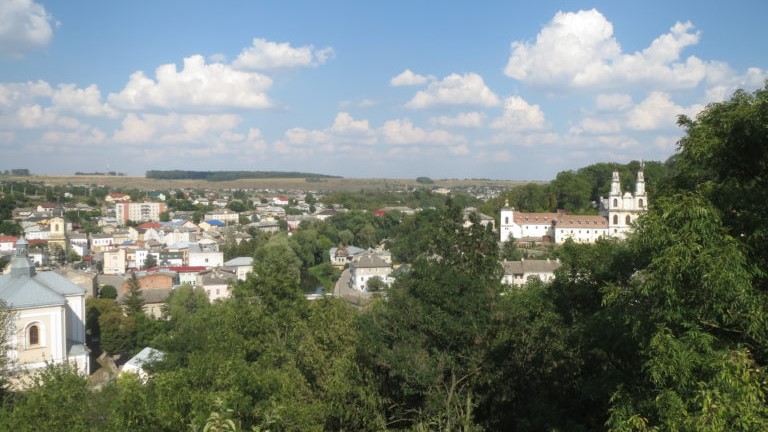 Everyone has his or her own Buchach. There are people who were born here and still live in the town. There are those who took their first steps on this land, but upon learning to walk fast and nimbly went far beyond their hometown. And then there are those who were not born here, but who were brought here by some unknown force. I am one of the last. Born in Luhansk, I find it difficult to find something that connects me to Buchach. Except for my father’s stories about his military conscription in Chortkiv, 37 km away from Buchach. But that is not the reason I am here. I was not trying to trace the military journey of my father. I was interested in the winding and mysterious path of Shmuel Yosef Agnon.

If again to talk about those whom Buchach calls for various reasons, it is easy to find motives for the travelers: old history, beautiful architecture, unique botany, the masterpieces and riddles of Pinsel, and the encoded creativity of Agnon… Yet again, I came for the last. For the one whose words had the power to take away the peace from my soul and the sleep from my night.

I knew I would not be able to see him in person, but I wanted to at least walk the streets he took, to find the slightest evidence of his presence or touch the ground that gave birth to Agnon and gifted him with all the skills and talent that helped him to create unparalleled texts worthy of the Nobel Prize. It is the name I kept repeating in discussions over the last several months. Agnon.

Agnon liked to coin words in Hebrew, the language that was being restored at the time and acquiring new facets. His neologisms, though, can be appreciated only by those who are fortunate to read Agnon’s original texts. We cannot but take it for granted. There was one word I received as a generous gift brought from the Land of Israel – “glasses.” In Agnon’s language they are בתי עיניים (batei einaim), or houses, or rather dwellings for eyes.

As soon as I arrived to Buchach, I put on Agnon’s glasses. Instead of the Cyrillic script I seemed to see the Jewish square script, so I had to carefully blink several times to discern the right words. I walked past the place were there used to be a synagogue, a Beth Midrash, and a Jewish hospital. Although the buildings had long been gone, and some of the sites were now occupied by market stalls while others remain empty, I saw them with the inner vision instilled in me by Agnon’s works.

I had a guide on this trip. Mr. Mykola knows all the nooks in the town. He is willing to show travelers around any day and at any time, to accompany them as long as they need. He is merely in love with his land. I wouldn’t be surprised if he, too, during walking tours puts on the traveler’s glasses. This allows him to see the city, which he knows by heart, anew.

From time to time, I took off Agnon’s glasses to see the places Mr. Mykola wanted to show me. We passed through the central part of the town and went up the hills, to the Jewish cemetery. My guide decided to show me what I came for first. The cemetery was densely overgrown with weeds, as if the trees and bushes chose to protect the matzevot because they still remember how quite recently, some 75 years ago, the tombstones that protected the memory of the dead were used by the Nazis to pave the roads and then by the Soviets to pave the sidewalks. However, Mr. Mykola encouraged me and took me to the side where it was still possible to see graves. He took me to the grave of Agnon’s father.

Stepping aside from the cemetery, we saw the town down in front of us. It seemed to have rolled down from the nearby hills. I heard that the locals compared Buchach to a pit or a moat. To me, it reminded me of a cradle. It felt so cozy and serene, it seemed to be the only place the soul could rest, the only place where winds could lull you deep and fast asleep. On the opposite side of the hill from where we stood rose yet another hill, Mount Fedir, the burial place for Poles and Ukrainians.

For a moment, it seemed to me that they had agreed upon it themselves, as if there had never been any hostility between the three peoples. They occupied different hills on the opposite sides of the town deliberately, in order to guard the life and sleep of the living. That is why it feels so peaceful here, for the world of the dead protects the cradle of the living.

At that point, I realized it was the serenity that brought me here, to a town so similar to my native Lutuhine, abandoned both by the living and the dead. It is only in one’s childhood town that a person can fully rest the soul. When it was no longer possible for me, when Lutuhine was taken over by others, Buchach warmly took me in, making no difference between insiders and outsiders. It also lulled me into a deep sleep.

Mr. Mykola and I went on. He told me about the unique Buchach town hall, the St. Nicholas Church, the Basilian Fathers Monastery, the Assumption Cathedral, and the Intercession Church. They also seemed to take their repose along with the inhabitants and travelers in the cradle of the town. We walked past the roadside statues, the chapels, the wells and springs. The little town never ceases to amaze, revealing more and more treats for the traveler.

The town even knows where and on which part of the road the traveler might feel thirsty. We stopped by the Three Pipes Well, from which during the day and night spring water flows. In the August heat it is especially healing. Collecting a handful of water from one pipe, then from another, I started thinking again about the symbolic nature of the number three for this land, as if each nation had a pipe in this well. While water streamed out of two of the pipes, from the third not even a droplet of water dripped. I saw these pipes as as a metaphor, the third empty pipe symbolizing the absence of Jewish life in the modern town.

But it was worth putting on Agnon’s glasses again to take me back to a time when Jewish life bustled together with the life of Ukrainians and Poles. They must have had their differences, but it is difficult to claim the neighbors were enemies. It is enough to notice the small distances between the Polish church, the Ukrainian church, and the Jewish synagogue. The caring hands of the small town had enough room for everyone. Today, however, almost nobody speaks of it.

Few locals know every person originating in this land who went farther. Probably, one must put some distance between themselves and the town and experience other lands to better see one’s own. Not everyone would be able to tell you that the town and the surrounding area gave birth not only to Shmuel Yosef Agnon, but also to Solomiya Krushelnytska, Joseph Knebel, Osyp Nazaruk, Jan Franciszek Adamski, a grandfather of Vsevolod Nestayko, and Sigmund Freud.

The list could be extended with more names. They challenge the current residents of the town. The dead keep silent; it is time for the living to talk about the dead. Silent is the Buchach castle, older than the Potocki dynasty, or even than the Buczackis. Its ruins along with the ruins of the Pidzamochok castle fortress peacefully look down from their hills on the Strypa River – a river which used to flow rapidly and steadily but now which runs timidly through the town as if fearing to disturb not only the residents’ night dream but the day’s as well. The town also has a railway and a tunnel through which until recently people used to go – it used to be and must still be an important strategic site. Now, the railway runs nowhere. The Buchach station is a terminus, not even for people but for industrial goods.

I think you have to be born in Buchach or live in it for some time to be able to see all of its apparent and hidden treasures, to solve its old mysteries. Or maybe not. Maybe you have to come from afar to be able to truly appreciate and fall in love with this small and cozy town. Whichever is true, the town does not care. Due to the old age of the castles and fortresses, they are not concerned whether their history will be remembered or forgotten. The dead will stay in their graves even if an amusement park is built on top of them. However, it is time for the living to take their turn to put on several glasses, to put them on all together, or vice versa, to take them off. Do we really need glasses to finally see something that is so obvious?