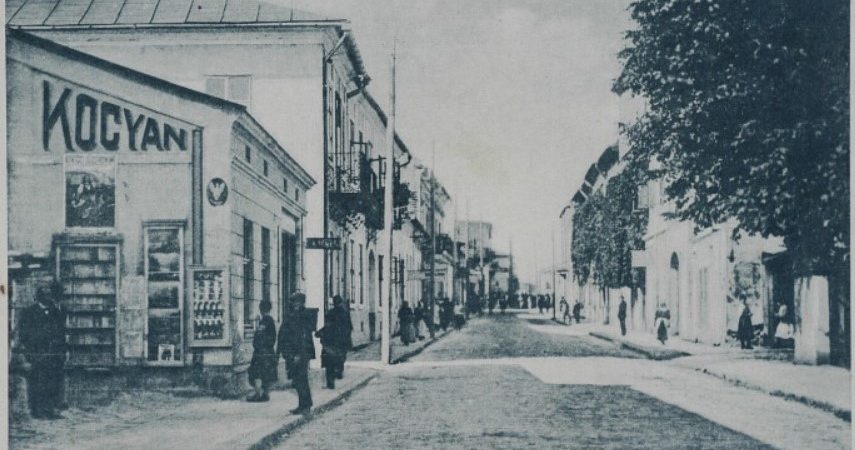 To get a feeling of what Brody’s cityscape and residents looked like at the beginning of the twentieth century, we can glimpse through the postcards produced by Władysław Kocyan. Kocyan created one of the largest collections of postcards of the town and today they serve as invaluable documents of a bygone era.

Władysław Kocyan began a stationery company in Brody before WWI, which he ran until he left Brody in 1944. He sold paper, stationery, newspapers, postcards, and similar items in several shops around the town. As part of his business, Kocyan also produced postcards with views of Brody.

As the producer of the postcards, Kocyan would have been responsible for
selecting not only which images he wanted to represent his town but also the languages used for the captions. Though there is no doubt that in addition to his own preferences, the current political situation would have also dictated the choice of language. Throughout the several decades that he ran his business, Kocyan found his hometown under the Austrian Empire, in the grip of the First World War, under Russian occupation, a part of the West Ukrainian People’s Republic, and finally under Poland — all of which would have affected his business and business choices one way or another.

And so over the years Kocyan released many series of postcards, often reusing the same images over and over but with different languages for the caption. All in all, five different languages were represented: Polish, German, Ukrainian, Russian, and French.

During Austrian times it was common in Galicia to produce bilingual postcards (in German as well as the official language of the region since the 1870s — Polish) or postcards with only Polish captions. It was a lot less common to find Ukrainian. Yet some of Kocyan’s postcards are trilingual with German, Polish, and Ukrainian captions. This particular series dates to 1914 to when Galicia was still part of the Austrian Empire.

Once Brody became part of Poland after WWI, alongside Polish, French captions are found on some of Kocyan’s postcards. (Though postcards with only Polish were also produced during this time). I assume French was chosen since the language once had the status of lingua franca.

Kocyan also released a series of postcards with Russian captions alongside Polish ones. Although these postcards are not dated, the pre-1918 Russian orthography and the fact that Galicia was briefly under Russian occupation (1914-1915) means they were most likely published during that time. I wonder if in this case Kocyan had a choice or was forced to use Russian.

Together with German, Polish, and Ukrainian, there was a fourth important and widespread language in Galicia — Yiddish. Yet none of Kocyan’s postcards had Yiddish captions, despite the fact that Brody had one of the highest proportions of Jews among Eastern European cities.

Writing in The Galitzianer about a postcard depicting Brody’s main street Goldgasse, Börries Kuzmany argues that the Polish-German-Ukrainian trilingualism was chosen intentionally to distinguish Brody from other cities. “Yet, one of Brody’s most important languages was certainly missing: Yiddish. Even though the city’s Jewish elite, heavily influenced by the Haskalah, was quite favorable towards standard German and sent their children to the German Kronprinz-Rudolf high school in the town, Yiddish was definitely the most common language among Brody’s lower strata. Farther away from the city’s wealthier streets, Yiddish signboards and inscriptions were certainly frequently found. However, as the Austrian constitution perceived Jews solely as a confessional minority, Yiddish never gained any legal status. Without doubt, Władysław Kocyan could have decided to add a Yiddish caption to his postcard, but Yiddish had a low reputation; furthermore, it would have obviously contradicted his choice of a photograph that lacked any identifiable Jews.”

And so other than just showing us what Brody once looked like by capturing the town’s most important sites and architecture, Kocyan’s postcards also give us an insight into the history of the town and region. The fact that so many different languages were used (or others not used) over a relatively short period of time only highlights the tumultuous times leading to, during, and right after the First World War.

A large collection of Kocyan’s postcards can be found on the Polona website. The scans include the backside, which lists the name of the producer. Many of them are not dated; however, we can get some idea of the time period judging by the languages of the captions. It is from this website that most of these postcards were taken from. This post’s collection also includes a few images from the Center for Urban History as well as a postcard from my family’s collection.

Brody’s market square dates back to the end of the sixteenth century. From here began the main streets of the city.

The building of the hotel dates to the first half of the nineteenth century. It received its current appearance at the beginning of the twentieth century.

Hotel Bristol, built in 1909, is one of the best examples of Seccession architecture in Brody. It became famous around the world thanks to Joseph Roth’s descriptions of the hotel in several of his literary works.

The building of the gymnasium was constructed in 1881-83. In 1881 the school was named after Rudolf, the Crown Prince of Austria (K.k. Kronprinz Rudolf Gymnasium). In 1920, under Poland, the Gymnasium was renamed after Polish writer Józef Korzeniowski. Today it is named after Ukrainian painter Ivan Trush, who studied here before the war. Famous Jewish German-language writer Joseph Roth also studied here. (My grandfather Ivan Senyk became the director of the school during the war — in 1940.)

Built in 1909-1911 as a branch of the Prague Credit Bank, the structure was used for its intended purpose only until 1914. During the war it was used by the Austrian City Council and during the West Ukrainian People’s Republic it was the headquarters of Brody’s military command. In the interwar period it housed the command of the Crescent Cavalry Brigade.

The Neo-Romanesque building (1904-5) was constructed for the Polish gymnastic organization Sokół, founded in Lviv in 1867. It also housed a library and the city’s first cinema (1912).

Brody was located near the border between the Russian and Austrian Empires. More images of the Brody border here.

The original stone Roman Catholic church was built in the 1660s but was significantly reconstructed over the centuries.

Construction of the Great Synagogue began in 1742. It was one of the largest in Galicia.

2 thoughts on “Brody as Depicted on Władysław Kocyan’s Postcards”