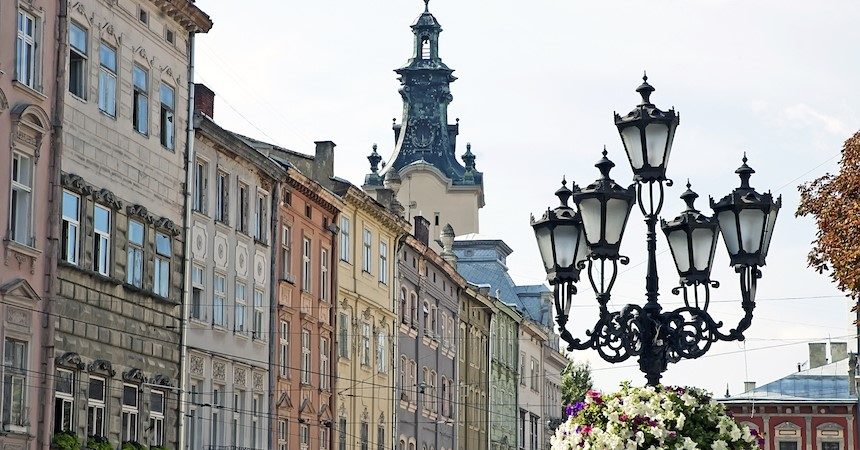 Austrian architecture and culture is often equated with magnificence. Anyone who visits Vienna cannot help but marvel at its many beautiful Baroque buildings, the grandeur of the Hofburg palace, the exquisite culture that gave the world Mozart and Strauss. An air of refinement is pervasive. Conversely, Austrian rule was something altogether different, especially on the empire’s fringes during the 18th and 19th centuries. There was a rage for standardization and control, the imposition of imperial culture, all in the name of civilization. Austrian officials believed it was their mission to bring order and structure to Eastern Europe, no matter the cost in human or financial terms. This was especially true in the newly acquired province of Galicia, which was annexed following the first partition of Poland in 1772. The Austrian rage for order can be understood in the changes that Habsburg rule brought to Lviv (Lemberg in German). This happened most prominently in Rynok Square during the decades after the Austrians took control of the city.

Today the buildings on the northern side of Rynok Square are lively and colorful, they add to the festive atmosphere of the square. It is hard to believe that by the mid-eighteenth century most of these buildings were in various states of disrepair, with many abandoned and several on the verge of collapse. Then the Austrians took charge, bringing a much needed boost in new ideas. Slowly the northern side came to back life. An architectural rebirth with the Baroque style began to take hold. Take for instance the building at Rynok 40, known as the Zukhorovychivska Townhouse. In 1771, a year before the onset of Austrian rule, the house was bought by a postmaster named Anton Dejma. The following year, a reconstruction of the townhouse took place, updating it with Baroque architectural elements. Four doors down at the Boczkowiczowska Townhouse at Rynok 44, another Baroque restyling got under way in the early 1770s. This took place after one of the richest men in Lviv, a physician by the name of Boczkowicz, bought the townhouse. These badly needed upgrades helped revive the square’s northern side, but it would be wrong to assume that the Austrian inspired architectural revival was always a shower of festive enlightenment.

The will to control was greater than the will to create when it came to Austrian power in Lviv. The tendency toward standardization influenced the very color of the buildings on Rynok Square. Those brightly painted facades that exist today on the northern side of the square are a throwback to medieval Lviv, when each building had its very own color. This trend was known as Lviv Polychromy. The Austrian administrators banned this aesthetic sensibility and required that all the facades be painted in a dull gray color. The point was to change the look and feel of the city from its former Polish dominated self to a “civilized” Austrian one. Today, this kind of domineering standardization is more associated with Lviv’s Soviet era, but though their ideologies greatly differed, both empires shared an urge to impose their will on many aspects of the city’s look and feel.

It Is Nothing Special – The Austrian Rage For Order

Trends change and so do empires. Unlike the Soviet era which only lasted forty-nine years in Lviv, the Austrian period was three times as long. At nearly one-hundred and fifty years, this time span meant that the dynamic influences of changing artistic and architectural movements such as Neo-Classicism could take hold in the empire. Such trends made their way to Lviv and were showcased in Rynok Square. A series of sculptures featuring classical mythological figures and elegant fountains were installed there in 1815. They adorned the same exact places that the square’s wells had been located. The limestone sculptures allegorically portrayed Diana and Adonis representing earth, and Neptune and Amphitrite representing water. The Imperial Austrians were aligning themselves with the classical world. They saw themselves as the modern version of a higher form of western civilization. This was to be shared or some might say imposed upon the most far flung provincial cities of the empire such as Lviv.

The saying that every crisis is an opportunity aptly describes the cosmetic surgery Austrians did at the heart of Lviv. The Austrians took full advantage of the greatest disaster Rynok Square experienced in the nineteenth century to give it a transformative makeover, one that continues to inform how Lviv’s most important public space is seen and experienced today.  On a mid-summer’s day in 1826, the Rathaus, (the German word for Town Hall) collapsed. The most important building in the city was destroyed. The nerve center of the Austrian administration had to be rebuilt. The next iteration would be reimagined in an imperious and imposing style. Today, locals in Lviv often refer to the Ratusha (the Ukrainian word for Town Hall) as “a huge and hideous chimney.” As a friend of mine, a native of Lviv, once told me while pointing out the Town Hall (Ratusha in Ukrainian), “it is nothing special.” Architecturally speaking that is true, but Austrian officials were thinking in terms of administration, rather than aesthetics.

The Rathaus was and still is today an embodiment of Imperial Austrian bureaucratic architecture. The construction took eight years, which is not all that surprising since the building contains 156 rooms and 9 meeting halls. Each of its four sides have symmetrical façades. Its square tower, like the rest of the structure, has little to recommend it from an aesthetic viewpoint. The building was meant to be big, not bold, to be functional, not fashionable and act as a symbol of Austrian authority. It did all of these things rather well, a triumph of substance over style.  The construction of the new Rathaus also meant a reconfiguring of the area surrounding it. Houses that had once stood close to the northern side of the old City Hall were leveled as was the square itself. New cobblestones were laid. Rynok Square was now more manageable, more controlled. To the Austrians, order had been made from chaos. The square was now a civilized public space.

The Austrianization of Rynok Square

The first Habsburg Emperor to visit Lviv was Joseph II in 1773. On August 1 he wrote his mother and co-ruler, the Empress Maria Theresa, a letter from Lviv in which he said “I already see in advance that the work will be immense here.” And so it was. It took the Austrians over sixty years before they finally got the look and feel they wanted in Rynok Square. By the 1830s it had been brought into the early modern age and was now an imperial city at its heart. Rynok Square had become Austrianized, its look and feel has largely stayed that way ever since.