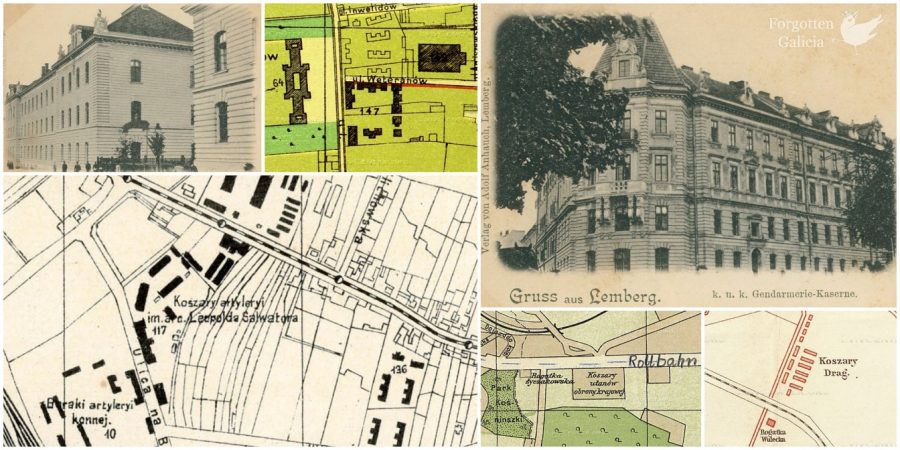 From the End of Nineteenth Century to WWI

When Galicia came under the rule of the Habsburg Monarchy in 1772, no specially built barracks or barracks complexes existed in Lviv. At first, the Austrian military used the premises of Lviv’s monasteries for magazines (ammunition storehouses) and barracks (Ger: Kaserne/Caserne; Polish: koszary; Ukr: касарні, казарми, кошари). Slowly, they also started to build structures intended for military purposes.

The pace picked up at the end of the nineteenth and beginning of the twentieth centuries, which is when many new barracks and barrack complexes appeared in the city. The army was growing in size — the total number of military personnel steadily increased during the nineteenth century and by 1901 reached 10,326 people. Additionally, weaponry and military equipment had changed over time. And so it is no wonder that the reformed military units needed more space.

Below I’ve gathered information about these newest barracks in Lviv (click here to see the oldest ones) together with historical map fragments that show where these barracks were located and how many structures once existed in these complexes. The number of such barracks complexes around Lviv was quite large, and not always a lot of information is available for them.

The complex built between the streets of Kleparowska (Kleparivska), Weteranów (Veteraniv), and Inwalidów (now Baturynska) included barracks for two battalions, a horse riding hall, outbuildings, and a training ground for soldiers. The regiment was trained at a shooting range created nearby, near the hill behind the House of the Invalids. That is also where all units of the Lviv garrison learned to shoot.

The barracks complex was built on the territory of Ferdinand Pietsch’s (Pietzsch) factory of agricultural machines, boilers, and pumps, which was founded before 1850. In 1886 the factory moved its operations to Pidzamche.

Published in a local newspaper in 1888: “New buildings in Lviv…The gmina will build several facilities for military quarters, including cavalry barracks on the grounds of the former Pietscha factory on Łyczakowska Street…” (https://zbruc.eu/node/18652)

In 1883, the Landwehr Lancers Regiment was formed, consisting 65% of Ukrainians. At the end of the nineteenth century, a complex of administrative-barracks buildings was built in Jałowiec for the needs of the regiment, which included a field, three stables, a riding hall, and additional outbuildings.

After WWII, when the cavalry units were liquidated, the 128th Auto Repair Plant of the USSR Ministry of Defense was located in on the territory. Today it is still an auto repair plant.

Housed the Austrian Army’s 11th Cavalry Artillery Division (K. u. K. Reitende Artilleriedivision № 11), established in 1908. This was one of the last barracks built by the Austrians. The complex included three barracks, a riding hall (maneż), six buildings for stables and guns, as well as administrative buildings.

Location: 3a Kniahyni Olhy St. (formerly Wulecka St.)
Built: 1895
Housed: A horse riding hall that was part of the military base on Wulecka St.
Today: A gym

A horse riding hall (maneż) for the Austrian army, which was part of the Austrian military base on Wulecka St. The structure was used as a riding hall until WWII. During Soviet times it was converted into a specialized gymnasium, which belonged to the Army Sports Club (SKA). In 1976, it expanded, and in 2011, another was annex added to the back of the building. Today, it is still used as a gym.

Headquarters and barracks for the regional and district command of the Austrian gendarmerie.

Barrack and Warehouse Complexes on Janowska and Błonie

With the advent of the railway in Lviv, the military became the first use the sites near the station to construct barracks and warehouses in which they stored machinery and artillery weapons. This made it convenient to load equipment to move to areas of fighting. Barracks and warehouse complexes appeared at ul. Na Błonie (now Zaliznychna Street) and at 17 and 65 Janowska (Shevchenka) St.

Specifically, in 1890 on Na Błonie, barracks were built for the heavy artillery division — the Arch. Leopold Salwator Artillery Barracks. At first divisions of the 11th Corps Artillery Regiment were stationed here, from 1909 the 14th Detached Division of the Horse Artillery.

Today much of the buildings have been lost, especially around Zaliznychna Street.

Just north of the Arch. Leopold Salwator Artillery Barracks was a territory with magazines (military warehouses). Many of these buildings have survived, some are in a poor state — others have been renovated.

Further east, between Janowska (Shevchenka) St. and Świętokrzyska (Bortnyanskoho) St., a barracks and warehouse complex was built. It housed the infantry. When I visited the area I couldn’t find any traces of these barracks.

A barracks complex was built across from the Lychakiv Cemetery at the beginning of the twentieth century, which housed the 19th Landwehr Infantry Regiment “Lemberg.” Later, it was transformed into residences for officers. Part of the territory now has a modern apartment complex — it looks like the original buildings were kept but that they were transformed into new apartment buildings and that additional floors were added to them. One building houses the Eastern Regional Administration of State Border Service of Ukraine.