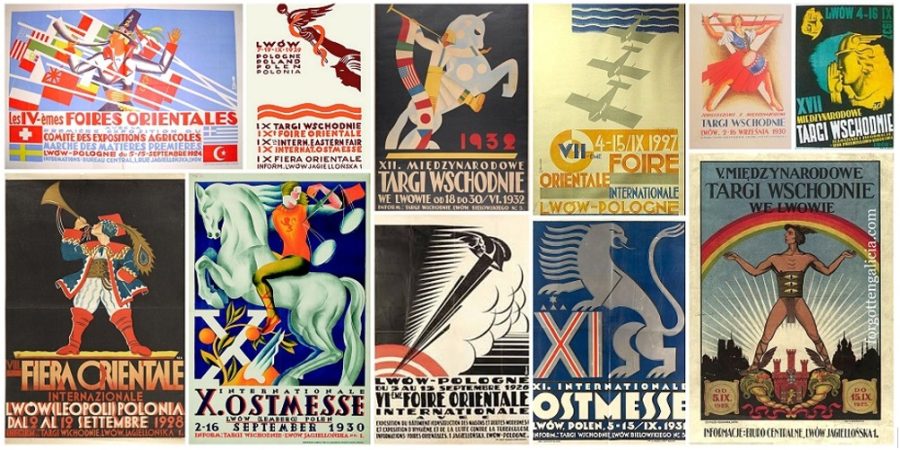 The Eastern Fair (Targi Wschodnie in Polish) was a major trade fair in interwar Poland. It was established in 1921 in Lwów (today Lviv), after the end of the Polish-Soviet War, which redrew the Polish-Soviet border and incorporated Galicia into the Second Polish Republic. The aim of the trade fair was to facilitate new business partnerships between Polish and foreign entrepreneurs, especially with Romania, Hungary, and the Soviet Union. Lviv’s location near the border with several foreign countries gave it an important role in stimulating international trade and fostering Poland’s economic development.

The fair was held in Stryi Park (Park Stryjski in Polish), on the site of the National Exhibition of 1894. In addition to dozens of pavilions, the fairground had its own rail siding with a freight station and warehouses, a customs area and customs office, a telephone exchange and post office, and tram connections to the city.

For nearly two decades, the Eastern Fair grew in importance, attracting over 1,000 exhibitors and by the late 1930s attracted 200,000 visitors. The annual trade fair was held 18 times before the invasion of Poland in 1939.

One of the legacies of the Eastern Fair is the modernist and Art Deco graphic design, in particular poster art, that was created to advertise the grand event. In fact, it was during the interbellum period that Poland’s rich history of poster art really began to flourish—and the Eastern Fair was a prominent subject.

While poster art was embraced as the a medium of choice for advertising after the the First World War, modernist styles such as Art Deco proved to be a great way to present information to consumers in a simpler and more direct visual language.

“The industrial appeal had influenced the appearance of an Art Deco poster, reflecting on the new ideas in typography and the geometric treatment of a surface. Art Deco design aimed to transfigure the essence of the physical world through simplification, making the visuals more abstract but keeping them within the domain of the figurative, which made them comprehensible and universally acceptable,” from The Irresistible Nature of an Art Deco Poster.

As for Poland in particular, “Art Deco posters present evolution in Polish typography. It consists in abandonment of formal discipline and approval of the freedom of design….The decorative form of poster appeared after rejecting the rule of writing in horizontal lines and homogeneity of fonts and their size. The decorative art introduced new proportions of letters, whose legibility and visibility are in harmony,” from Polish Art Deco Posters in Lviv.

Taking the above into consideration, it is no wonder that the most receptive creators of posters in this period were architects who applied the rules of geometry to their graphic design. Accordingly, many of the logo and poster designs for the Eastern Fair were created by architecture students, such as Tadeusz Teodorowicz-Todorowski of the Lviv Polytechnic and Tadeusz Gronowski of the Warsaw University of Technology.  In fact, Tadeusz Gronowski was the first graphic designer in Poland to specialize in poster art and is considered the Father of the Polish Poster (see The Legacy of Polish Posters).

Below is a collection of posters advertising the Eastern Trade Fair. As the fair was international, we see that the posters are in several different langauges, including Polish, English, French, German, Italian, and Czech. (Interestingly, I haven’t come across any posters using Ukrainian. This is probably due to the fact that Polish was the official and dominant language in Lviv at the time. Furthermore, few Ukrainians participated in the fair due to both economic and political reasons.) The same exact design or a slight variation of the same design could be used for different languages, for different years, or in various media. For example, there are two images below that look like postage stamps; however, as they don’t have a denomination, they were probably used in other ways.

2 thoughts on “The Eastern Fair in Lviv: Art Deco Posters”