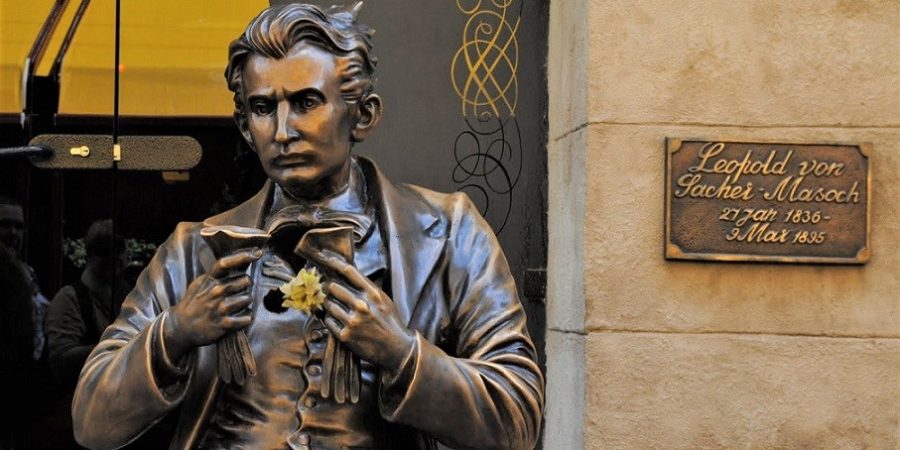 On Serbska Street, just off Rynok Square in the heart of the Old Town, is a statue of Leopold von Sacher-Masoch, the man whose surname gave rise to the term masochism. Sacher-Masoch spent the first twelve years of his life in Lemberg (Lviv’s German name at the time). He is the city’s most famous and notorious native son. His early childhood development was affected by what he experienced in the city and surrounding countryside. This would have an effect upon much of his literary output, most famously the erotic masochism of his novella, Venus in Furs. While modern day Lviv, like nineteenth-century Lemberg, is a bastion of conservative mores, Sacher-Masoch has added a dash of eroticism to the city.

An Imagination Fueled By Brutality

In 1836, Leopold von Sacher-Masoch was born in Lemberg to a father who was the city’s Director of Police and a mother that came from the Ukrainian nobility. The family he was front and center in the world of Austrian Lemberg. They made their home at the present day site of the Lviv Grand Hotel on the city’s main boulevard (Svobody Prospekt) overlooking the then uncovered Poltva River. At the time of Leopold’s birth the family’s surname was Sacher. The hyphenated addition of Masoch only came later in his youth. After his uncle died, the last male in the mother’s family line, she requested that von Masoch be added to the family name. Without this addition, the term masochism would never have made it into the lexicon.

The young Leopold had a unique upbringing. His father, though highly cultured, was dispassionate and unemotional toward his son. As Chief of Police in Galicia’s largest city, he was preoccupied with Polish conspirators and the numerous threats to Austrian power from a multiethnic populace that was slowly gaining national consciousness. To be sure the young Leopold would have heard stories about prisoners and witnessed their confinement, which by modern standards was harsh and unforgiving.

On the maternal side, his relationships were marked by experiences with not one, but two women. Throughout his life, Sacher-Masoch expressed adoration for his birth mother, but he was reared during his early years by a Ukrainian peasant woman, the beloved Handzya. She hailed from the nearby village of Vynnky. The young Sacher-Masoch spent long periods of time with her in the rural countryside. Here he would have first become aware of the Polish nobility’s treatment of serfs, who were virtually slaves. Punishments for even slight offenses often meant brutal floggings which sometimes resulted in death.

When he was ten years old, an event took place which scared the young boy’s imagination and view of human affairs for the rest of his life. In 1846 what became known as the Galician Slaughter took place. It began with an uprising of the Polish nobility in a vain attempt to gain independence. The Austrian administration stoked peasant resentment of the nobility, which led to over a thousand aristocrats being decapitated and mutilated. While Sacher-Masoch did not witness this violence first hand, he did hear the gruesome stories.

Only two years later, he witnessed another outbreak of violence, with the revolutionary uprising of 1848. In this, Sacher-Masoch was not an innocent bystander. While only fourteen years old, he still helped man the revolutionary barricades. Conversely, his father helped lead the effort to keep control in the city. This ended up costing him his position as Director of Police, as he was scapegoated by Galicia’s provincial authorities for the harsh reprisals that they themselves had ordered. The family moved to Prague later that year when his father received a new posting. Leopold Sacher-Masoch would never live in Galicia again, but it had a long afterlife in his conscious and literary output.

Today Sacher-Masoch is famous as the author of Venus in Furs, though he wrote numerous short stories and works of history that focused on Galician folklore. These works are unknown to Western readers since only two of his books have been translated from German (the language in which Sacher-Masoch wrote) into English. Venus In Furs overshadows all of his other efforts due to its themes of submission, domination and slavery. Included in the novel’s geographical settings are Galicia and the nearby Carpathian Mountains. The submissive in the novella is a Galician nobleman, Severin von Kusiemski. He signs a contract to become the submissive slave of a Lemberg widow, Wanda von Dunajev. This character was modeled after Baroness Fanny Pistor, a mistress who Sacher-Masoch signed a contract with to become her slave in 1869. Venus in Furs was published in 1870. In the novella, the couple meet at a health spa in the Carpathian Mountains, a contract is agreed upon and a dominant- submissive relationship ensues.

I do not care to see you to-day or to-morrow, and not until evening the day after tomorrow, and then as my slave.

“As my slave” was underlined. I read the note which I received early in the morning a second time. Then I had a donkey saddled, an animal symbolic of learned professors, and rode into the mountains. I wanted to numb my desire, my yearning, with the magnificent scenery of the Carpathians. I am back, tired, hungry, thirsty, and more in love than ever. I quickly change my clothes, and a few moments later knock at her door.

I enter. She is standing in the center of the room, dressed in a gown of white satin which floods down her body like light. Over it she wears a scarlet kazabaika, richly edged with ermine. Upon her powdered, snowy hair is a little diadem of diamonds. She stands with her arms folded across her breast, and with her brows contracted.

“Wanda!” I run toward her, and am about to throw my arm about her to kiss her. She retreats a step, measuring me from top to bottom.

“Mistress!” I kneel down, and kiss the hem of her garment.”

Historians and biographers of Sacher-Masoch believe that many of the ideas in the novella were born from things he had heard or seen during his youth. Dominant-submissive relationships between lord and serf, master and slave were typical in rural Galicia. Why Sacher-Masoch felt compelled to experience these things himself are best left to psychoanalysis. It is enough to say that the social situation in Galicia scarred him deeply from an early age and informed Venus in Furs. Sacher-Masoch’s name may have led to the creation of the word masochism, but the Lemberg and Galicia that he experienced from 1836 to 1848 were what really defined it.