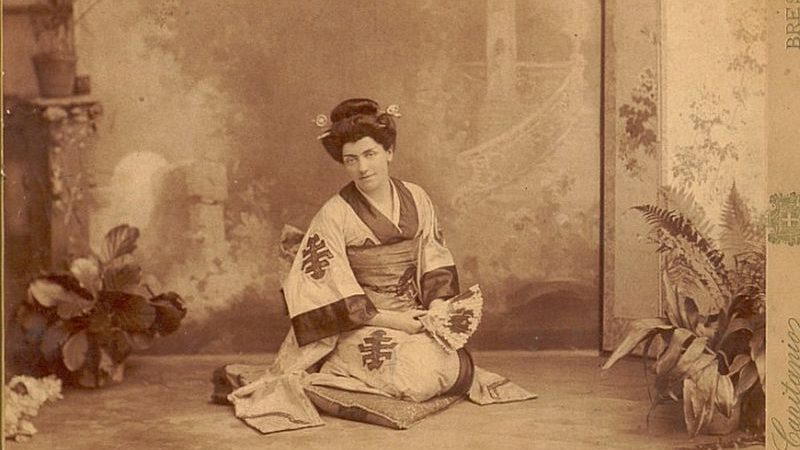 It was a voice destined to be heard by millions, a siren’s call that was heard across the world. In opera houses from Odesa to Ottawa, Naples to New York she performed before adoring crowds entranced by the strains of her sonorous vocals. She filled the halls with sounds of romance and yearning, pouring out her heart at each performance. During her lifetime she was received with acclaim. In the birthplace of opera, Italy, she single-handedly rescued Puccini’s Madame Butterfly. It was this and hundreds of other masterful performances that caused critics to deem her one of the greatest sopranos of all time.

This was quite an accomplishment for a woman born in a provincial outpost, a tiny village in the poorest part of an empire that would eventually collapse. During her lifetime she lived under empires, republics and occupations with wildly varying systems of freedom and tyranny. Yet no ideology ever harmed her spirit, she was too singular and transcendent. After being trapped in the most lethal place on earth during World War II, she emerged unscathed. Her talent was incomparable, her voice unforgettable and her life untouchable.

She was Solomiya Krushelnytska, one of the greatest soprano opera singers ever, a woman who sang her way from the far eastern frontier of Austria-Hungary to ornate opera halls around the world.

A Remarkable Rise – From Galicia With Love

Solomiya Krushelnytska’s life began far from the fame, glitter and glory of the opera world. She hailed from one of nineteenth-century Europe’s most rural and impoverished regions, the far southeastern portion of the Austrian administered province of Galicia. Her birthplace, Biliavyntsi, was a small village deep in the countryside. A place that was notable for nothing. Krushelnytska’s family was part of the lower Ukrainian nobility. Her father, a priest in the Ukrainian Greek Catholic Church, held one of the most prestigious positions in the tiny village.

The young Krushelnytska spent her first years within earshot of Ruthenian peasants singing folk songs while working the fields. At the age of five her family moved to another village on the edge of the region’s largest city, Ternopil. It was only a city relative to its rural surroundings. The population was only 20,000. Yet it was here that Krushelnytska first took the stage at the tender age of eleven. Her remarkable singing ability brought attention and recognition. She was soon sent to the Galician metropolis of Lviv, to further her education at the city’s conservatory. There she received a superb education in the performing arts.

The early period of Krushelnytska’s life culminated with her first professional performance at the Lviv Theatre of Opera and Ballet. This actually occurred before her graduation from the conservatory. She won critical acclaim for her performance, singing the mezzo-soprano in Donizetti’s La Favorita (The Favorite), while playing the King of Castile, Alfonso XI’s mistress Leonora. This and several other performances in Lviv gained her notice by the master Italian female soprano and opera diva, Gemma Bellincioni.

With Bellincioni’s encouragement Krushelnytska traveled to Italy where she furthered her education in opera, both at school and on the stage in Milan. By the turn of the twentieth century her career had soared into superstardom. Lviv had been a launching pad to greatness for Krushelnytska. She could not have suspected at the time that over four and a half decades later she would return to the city and become trapped there for the rest of her life.

Between 1900 and 1939 Solomiya Krushelnytska reached the pinnacle of artistic achievement. She was able to perform no less than 63 parts in eight different languages. She took the stage in all the major opera houses in northern Africa, North America, South America and Europe. In the early 1920’s she set her opera career aside to begin what would become a highly successful concert career.

Her personal life blossomed as well. She married an Italian lawyer, Cesare Riccioni in Buenos Aires. He was also the mayor of the city she called home during these years, Via Reggio, on the northwestern coast of Italy. From their house she could see the shimmering blue waters of the Mediterranean. It was a life of accomplishment and accolades, far from the unsettled atmosphere of her homeland which had become part of the Second Republic of Poland. She did keep a residence in Lviv, where first her family and later on, intellectuals, artists and singers stayed.

Following her husband’s death in the late 1930s, Krushelnytska decided to return to her multi-story home on the edge of what is today Ivan Franko Park. It was the fall of 1939, the worst time possible to return. She became trapped in the city when Nazi Germany and then the Soviet Union attacked Poland.

After the city was turned over to the Soviets, Krushelnytska suffered under the occupation. Her home was nationalized, with several floors taken up by the Soviet military. She and her family were left to reside on an upper floor. This was a far cry from the beautiful life she had enjoyed along the Italian coast. The days of resounding applause, star struck crowds and critical acclaim were a thing of the past. Her destiny was no longer greatness, but just trying to survive.

Soon the city changed hands and so did her home. The Nazis set up where the Soviets had been. Her beautiful voice was drowned out by gunfire. Krushelnytska could only wait, but at least she was alive unlike hundreds of thousands of other Lvivans. Reverence for her talent and the fact she was an ethnic Ukrainian likely helped her escape the ultraviolence which rampaged through the city during this time. One can only imagine what Krushelnytska felt and thought during the war. After a lifetime of glitterati she was stuck near the center of one of the most dangerous places on earth. All she could do now was sing for herself or small audiences. She was now only one of many voices in the background waiting and hoping the war would end.

Eventually the Soviets retook the city. This time they would stay. In a strange turnabout, nothing was taken from Krushelnytska this time. Instead something was given. She was offered and accepted a position as a professor at the Lviv Conservatory, the place where she had gained her first real schooling in the arts of music, opera and high culture. Her life had come full circle. She would spend her final years in the same place her rise to fame and fortune had begun, once Austrian Galician now Soviet Ukraine. She was no longer a star, just a teacher with an incredible legacy. One of the all-time greats, she could no longer be seen on the starlit stages of Rome, Milan or Paris. Solomiya Krushelnytska was only to be found in Lviv, her voice making its final calls from behind an iron curtain.