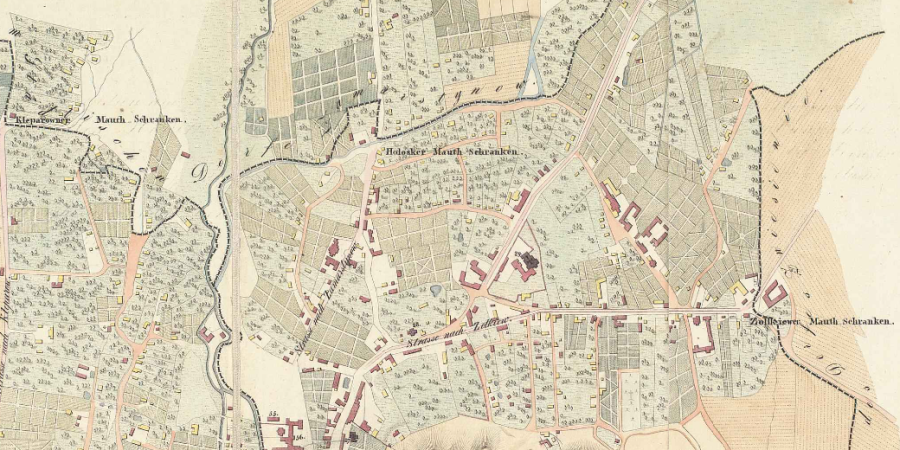 The first tollgates (Polish: rogatka; German: Schranke) in Lviv (Lemberg / Lwów) appeared at the end of the eighteenth century when Galicia passed into the possession of the Habsburgs. Until then, customs duties were collected at the city gates that were set within the city walls. In 1777, the dismantling of the walls began, and so to collect taxes on imported goods and regulate movement to and from the city, tollgates and tollhouses were built near the new city boundaries on the main roadways.

By 1802, these tollgates are already depicted on maps of Lviv. On the first ones, which are in German, they are marked as “Schranken,” which translates as “barriers,” or as “Mauth Schranken” / “Schrankenmaut,” which mean “toll barriers.” On Polish-language maps they are called “rogatka,” which in Polish translates as “barrier” or a “tollhouse.” In line with the Polish variant, on Ukrainian maps they marked as “рогатка” (rohatka).

Most were moved at least once to the new city boundaries, which expanded over the years. The checkpoints consisted of guard booths or small tollhouses, sometimes on either side of the road, as well as mobile wooden barriers made of beams and stakes that blocked the way. Armed soldiers were always on duty.

During World War I, the tollgates lost their purpose as customs posts, but instead acquired strategic defensive significance. And in the 1920s, after the cessation of all wars for Lviv, tollgates began to disappear — however, they were still marked on maps of Lviv until at least through World War II.

None of the tollhouse structures or other physical remnants have survived until today, and only a few depictions or photographs remain. The memory of them is preserved only on old maps of Lviv and in the name of a part of Lviv near B. Khmelnytskoho Street, which today many locals still call “rohatka.”

One of Lviv’s oldest roads leads from the city north-east in the direction of historic region of Volhynia, and accordingly was first named Wołyńska droga (Volyn Road). At the end of the eighteenth century, the road was renamed after another locality north of Lviv — the town of Żółkiew (Zhovkva): first in German Zolkiewer Gasse and from 1871 the Polish variant Żółkiewska. Today it is Bohdana Khmelnytskoho Street.

A strategic road, a tollgate was established on this road at the edge of the city on the border with the village of Zniesienie (Znesinnia), located at the intersection with the modern Volynska Street.

One of Lviv’s oldest and longest roads is Lychakivska, named after the Lützenhof folwark (manorial farm) that was established just east of the city center. Since the street lead east, this is how most foreign merchants came to Lviv. It was also the direction toward the Russian Empire, and that is why during WWI it was at the Lychakiv tollgate that the symbolic transfer of the keys to the city by the Vice President of Lviv Tadeusz Rutowski to the Russian military command took place.

The original Lychakiv tollgate, historically also called the Brody or Vynnyky tollgate, was located near what is today 154 Lychakivska Street, but later it moved a few meters closer to the city to the intersection with the modern Pasichna Street.

The first map from 1802 shows the tollgate at the first location, from 1841 the tollgate is shown at the second location.

By 1844, the tollgate has moved farther away from the city center, to the border between Lviv and the suburban village of Snopkiv, which is at the intersection of present-day Zelena and Krymska streets.

At the end of the nineteenth century, as can be seen on the map from 1890, it was moved to today’s Zelena and Dnisterska Streets.

The maps until 1878 show the tollgate at the first location, from 1900 the tollgate is shown in the second location.

The original Stryi tollgate was located on Stryjska Street (today Stryiska) near where the streets Ivana Franka and Zarytskykh meet. However, with the expansion of the city, the continuation of Stryjska Street, as well as the opening of the racetrack and the new Stryj cemetery, in the late nineteenth century the tollgate was moved farther from the city center to a new location near the intersection with the modern Sakharova Street. A nine-story residential building was built on the site of the tollhouse in the 1970s.

The first map from 1844 shows the tollgate still at the first location, by 1890 the tollgate is shown at the second location.

The Vulka tollgate was originally located on Wulecka (Vuletska) Street, which ran along the modern Kniayni Olhy Street and a part of Sakharova Street. Initially, the tollgate was located near the intersection of the two above-mentioned streets, but after the construction of the Lviv-Chernivtsi railway in 1866, it was moved to the intersection of Wulecka road with the railway tracks.

The first two maps, from 1841 and 1844, show the tollgate at the first location, from 1844 the tollgate is shown at the second location.

At the beginning of the nineteenth century (until the 1840s), before the appearance of the railway station in Lviv, the Horodok tollgate was located on Gródecka Street (today Horodotska) not far from where St. Elizabeth’s Cathedral now stands, on the square at the intersection of Tobilevycha and Chernivetska Streets. Then, the square had an unofficial name “Kopytkova” (Hoofed) because the excise tax was collected from each hoof of a horse or ox entering the city.

After the opening of the Main and Chernivtsi railway stations and the construction of the Lviv-Przemyśl railway in the 1860s, the tollgate was moved to the intersection of modern Horodotska and Kulparkivska Streets.

In 1889 a street nearby was named Za Rogatką (Beyond the Toll Gates) and was called such until 1936. Today, it is Boberskoho Street.

The Yaniv tollgate was originally located near St. Anna’s Church, but it was moved farther up Janowska Street (today’s Shevchenka Street) almost immediately — in 1792.

At first it was located before the Janow cemetery, near what is today 118 Shevchenka Street. Sometime in the late nineteenth century (c. 1890s), the tollgate was moved beyond the cemetery, near today’s Kyrylivska Street.

On the first map from 1802, the tollgate is at the first location, by 1820 it has moved to the second location.

Not far from the St. Anna’s Church, but on Kleparowska Street (today Kleparivska) was the Klepariv tollgate. No long after, no later than 1829, the tollgate was moved farther away from the city center to the intersection of current Varshavska and Hranychna Streets.

Also known as the Holosko or Murowany Most tollgates

The Zamastyniv tollgate was originally located near a stone bridge at intersection of today’s Zamarstynivska and Lemkivska Streets. The tollgate can be found at this location on the maps from 1802 and 1829.

On the the map from 1829, this tollgate was called Holosker as the road on which it was located led to the villages of Zamarstyniv, Holosko, and Briukhovychi. The tollgate is right on the border of what is labeled as “Dorfe Zamarstynow” (the village of Zamarstynów / Zamarstyniv).

From 1659 to 1863 Zamarstynivska Street was called Murowane Mosty (Stone Bridge), because it led to a stone bridge through an artificial, now extinct arm of the river Poltva (Nova Poltva or Koryto), which flowed along the northern boundaries of the city. The bridge was located on the corner of modern Zamarstynivska and Lemkivska Streets. And so the nearby tollgate also had the name Murowany Most.

The tollgate was moved sometime before 1844 to the area near the corner of modern Zamarstynivska and Horodnytska streets, where it existed until the beginning of the nineteenth century.

On later maps the tollgate was marked as Zamarstynowska, since from 1871 this is how Murowane Mosty street was named.