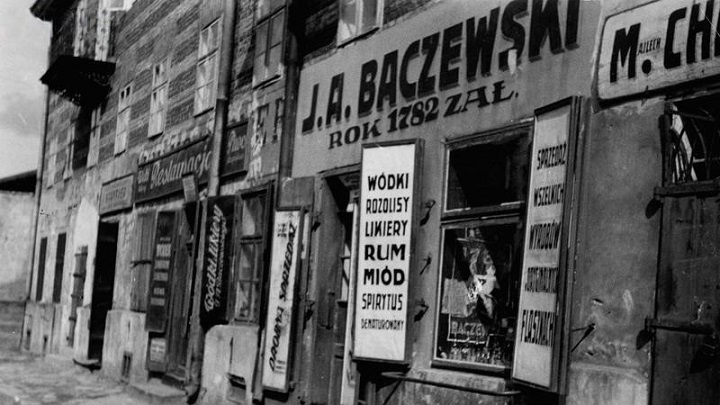 I’ve combed through hundreds of old photographs of Lviv (Lemberg / Lwów) in search of hand-painted signs that are visible today as “ghost signs.” While I’ve only been able to find one such example – a photograph of a milkhouse, the search was not in vain: I came out with a great collection of photographs that show how storefronts and advertisements looked in prewar Lviv.

From these images we see that signage could be found on all sorts of places and surfaces, from the facades of storefronts and signboards to large billboards and roller shutters.

Signs were painted directly onto the facades of storefronts, including on front panels, on spaces above doors, on special architectural elements designed specifically for ads, and on the walls of the second level.

It was also very common to hang wooden signboards on the buildings, on any available surface, including on balconies, on the inner side of open shutters, and above the main door or entryway.

In fact, at times it looked rather cluttered, which I found surprising as I thought it was a modern phenomenon to have such a high concentration of ads and signs chaotically attached to buildings.

Signs were also painted directly onto the metal roller shutters that protected the storefronts (and thus visible only during closing hours).

A few examples of these old large signs can still be found today, but unfortunately, not any of the ones that can be found in the old images below.

Two-toned stripes were often found accompanying signage on storefronts. These black and yellow (Habsburg colors used before WWI) or red and white (Polish colors used in the interwar period) stripes were painted onto storefronts to mark that the owners had permission to sell regulated goods.

Traces of these painted stripes can still be found around Lviv.

In the photographs we see that most of the signage was in Polish, though we can also find quite a few examples with Yiddish. German and especially Ukrainian signage was not common.

Here are more examples of the various kinds of advertisements that were found around Lviv. These photographs date from the late nineteenth century until WWII. The oldest images are at the beginning and those from the interwar period at the end.