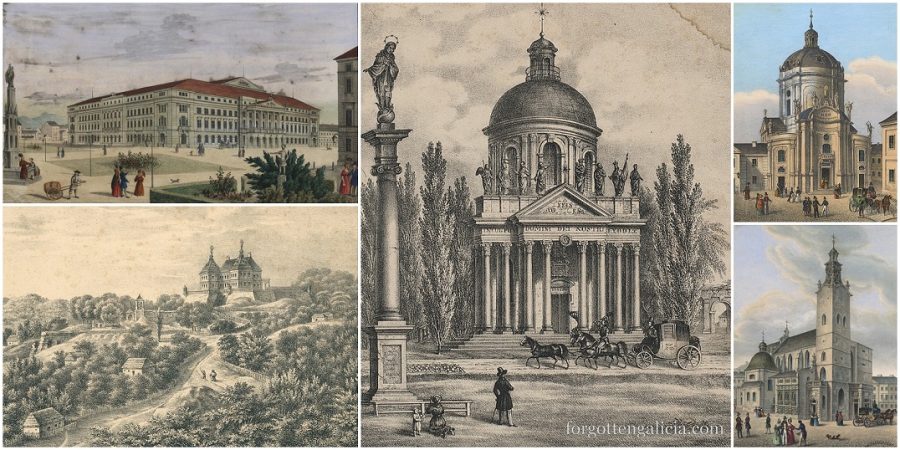 Karl Auer (German: Karl Auer; Czech: Karel Auer; Polish: Karol Auer) (1818-1859) was a lithographer and graphic artist of Czech descent who worked in Lviv and Galicia for over 20 years. After graduating from the University of Vienna in the 1830s, Auer came to work in Lviv at the invitation of the owner of the famous Piller Printing House.

In 1837-38 the lithography atelier of the Piller Printing House published an album of Auer’s lithographs titled Galicja w obrazach (Galicia in Pictures), a gallery of 48 prints of the most remarkable landmarks in Galicia, with image descriptions in Polish and German.

The introduction to the album, written by the Piotr Piller, reads: “Hardly there is a place in Europe of some historic and natural significance which has not been portrayed in paintings or drawings. Many such places in other parts of the world have been similarly portrayed, so that now looking at these pictures we can easily visualize the beauty or exotic attractiveness of palaces, waterfalls, architectural landmarks, mountains and other places of interest, sometimes even in minute details. Our Galicia which is no less rich in romantic and picturesque places and in historic and architectural landmarks, has not been sufficiently portrayed yet in the works of art. Even a province which cannot boast as many natural and man-made marvels would have attracted much more artistic attention than Galicia has done so far. That is why we are publishing an album of lithographs for the enjoyment of those who are not indifferent to the attractiveness of their native land, the achievements of the past, or the scenic beauty of nature,” from Welcome to Ukraine.

The Pillier Printing House also published Auer’s views of Lviv, which included many of the most beautiful and important landmarks of the city, such as the Lviv City Hall, St. George’s Cathedral, the Ossolineum, and the strzelnica – the building of the Lviv Kurkowe Confraternity.

Views of Lviv Published in 1928

Auer’s works on Lviv were featured in the album Lwów przed laty osiemdziesięciu: w współczesnych litografjach Zakładów Pillera (Lviv Eighty Years Ago: In Contemporary Lithographs of the Piller Printing House) by Tadeusz Mańkowski, published by the Piller-Neumann Graphic Studio in Lviv in 1928. The book is a collection of 32 views of Lviv landmarks by Karl Auer and Józef Swoboda. The prints were made from the original lithographic stones found in the Piller-Neumann printing house in Lviv.

In addition to landscapes and architecture, Karl Auer’s creative heritage also includes lithographic portraits of the great men of Galicia such as poet Adam Mickiewicz (1856) and playwright Alexander Fredro (1858). Auer also created a number of imaginary portraits of historical figures such as the Polish kings Bolesław I the Brave and Kazimierz III the Great (1842) and the famous Galician Marina Mniszek, who, though only for 10 days, became the first lady of the Russian Kingdom.

A unique work of Auer’s is his large (47×64 cm) autolithography from 1845 titled “Battling the Sea Monsters,” which served as an advertisement for a charitable theatrical performance in Lviv on the Pelchynskyi Pond in order to raise funds to help the victims of a severe flood. The money raised from the sale of this print, which was distributed to all bookstores, also went to the aid fund.