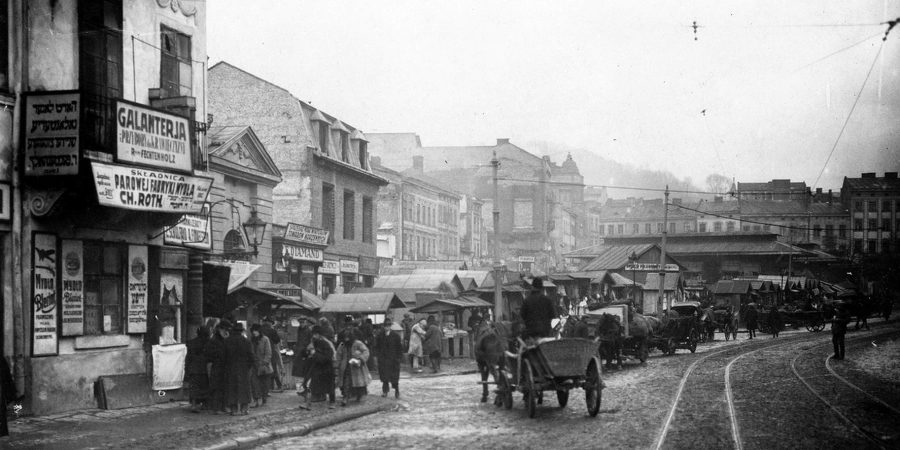 An excerpt from Tamten Lwów—an eight-volume monograph about Lwów (Lviv)—in which Witold Szolginia describes the Jewish quarter as he remembers it from his visits in the 1930s.

Witold Szolginia (1923-1996) was an architect, a native of Lwów until he was expelled to present-day Poland in 1946. Called “the encyclopedist of Lwów,” Witold dedicated his life to the architecture and urbanism of his hometown.

Below is an English translation of the excerpt from the blog Poemas del río Wang / Studiolum:

“Now we will visit a corner of Lwów which, I guess, was completely unknown or only superficially known to most of the inhabitants of the city. This part of Lwów, which some found mysterious and some even exotic, was the Jewish quarter in the northern part of the old Lwów, which grew out of one of the two ghettos of the city over the centuries. Just by way of explanation, Lwów had two Jewish ghettos during the centuries: the urban one within the ancient walls and the suburban one in the northern Krakow suburb. Over time, the latter became more and more populated and extensive, and it became the district most densely populated by Jews. Everyone could make sure of it even without visiting the northern suburb, only by having a look at the map of Lwów and browse through the names of the local streets and squares. Here are a few of them, which well show the character of the neighborhood and the everyday life of its inhabitants: Old Testament, Old Cheese Makers, Synagogue, Maccabeus, Onion, Fish, Goose, Dragon, Meisel, Bernstein, Sternschuss, Beiser, Kohn, Berek Joselewicz, Schleidher and Rappaport streets, Watchmaker and Grain square…

This area was rarely visited by anyone, unless he had some kind of personal or business reason. I never had any particular thing to do there, and as far as I remember, I went there only a few times in my youth, only out of curiosity, to feel the atmosphere of this neighborhood, which was so mysterious to me.

I try to recall the fading memories. I remember that once, along the Peltewna street which runs across the neighborhood, suddenly, in a moment I somehow felt a synthesis of all this quarter inhabited by Jews. My nose, which has always been sensitive to various odors, got a whiff of the smell of braised onion and the open street sewer, my eyes embraced the intricate web of streets and lanes with the hustle and bustle of the mass, or rather of the multitude of the black figures absorbed in their business, I heard in my ears that typical, monotonous buzz, like a beehive, which was so different from the noises of the rest of the streets, even of the neighboring ones. And I had the strange feeling that these people whom I see perhaps never rest under the roofs of their own houses, either day or night, but they do all their business here, on the muddy streets and crooked sidewalks. Everywhere there was a great crowd, even in the wide-open gates, the dark doorways and sunny courtyards, in the confusing patchwork of shops, warehouses, stables, groceries and workshops.

Since my earliest childhood I have been particularly sensitive to the colors that surrounded me, and this feeling was particularly intense here in the Krakow suburb, between the buzzing mass. The crowd filling the narrow streets and lanes, doorways and courtyards, churning up and down, meeting with each other and and fiercely gesticulating among themselves, seemed to me, if not uniformly black, in any case quite dark. Only rarely flashed from the darkness a color dress, shirt or scarf of a woman. In contrast, the interior courtyards and passages of the dark, dirty and worn buildings were especially colorful. The deeper you entered, the more intensive their contrasts became, and captivated my eye with their bright and completely inharmonious tones. And the colors which were missing from the clothes of people, here happily glittered on the bed-clothes hung up in front of the always open windows, on the outside corridors and on every floor, and the beetroot red of the pillows almost literally took a bite of the tablecloths and the underwear shamelessly put on public display and shining int the most unexpected colors.

The entire Jewish quarter passionately, almost fiercely traded along all the streets and in every yard. They only occasionally interrupted this, to draw new force in the little eating-houses working in the basements of the houses, emitting the smell of food richly spiced with onion and garlic, penetrating with some Oriental exoticism the air of the quarter.

This image came to life again in my memory, although the term ‘life’ is not particularly fitting here, for all this is dead since fifty years: it was destroyed, it does not exist any more. But neglect and wearing made these streets, lanes and poor houses somehow surreal already back then, in the late ’30s. It is therefore enough to say how precisely I could identify all details now, when I could add to my Lwów photo collection some pictures of the Jewish quarter made precisely in the late ’30s. On these photos, made by the excellent Lwów photographer, the engineer Mieczyslaw Watorski, I could see many things from those already told. Here you see the intricate topography of the Jewish quarter, the narrow, dark, winding streets with their bumpy pavements, the worn and crumbling facades of the houses with their blindly gaping windows. Black figures all over the streets, alone or in groups. Along the house walls here and there someone is sitting, in ragged clothes, in a sad, tragic and petrified posture, desperately waiting for buyers in this neighborhood… Elsewhere, two hopeful figures sell a whole pile of destroyed old shoes, which even the Jewish peddlers contemptuously called ‘rags.’

Yet other images seem to be reportage photos: the street shoemaker’s shop with the Jewish polatajko, as he was known in Lwów, with a child apprentice, as he tries to breathe some soul into a worn shoe, perhaps into a ‘rag’ bought in the front of the next house… But what is interesting: both the street shoe vendor and the bearded old Jew standing next to the shoemaker’s shop are reading a bulky volume. What can it be? A Hebrew religious, a Yiddish secular or a Polish book – who knows it? On the following image, as I had suspected, we can see the source of these readings, the street bookseller’s table laden with used books. And leaning over the table, another respectable-looking, gray-bearded Jewish is browsing among the books.

Such was the Jewish quarter in Lwów: not only crowded, noisy and of a merchant spirit, but also extremely poor and dilapidated, and besides intellectual – just half a century ago, when I sometimes visited it. Thanks to engineer Watorski for his masterful photos which now again revived to me this long disappeared place and people.”